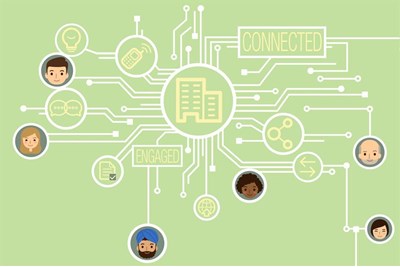 Engaging gig workers can be tricky. But this doesn't mean you shouldn't reach out

It’s the reality (some might say scourge) of recent times – the five million and counting self-employed who comprise the UK’s gig economy. Firms using them are literally changing the rules of employment. But does this mean organisations also need to change how they think about engagement – by rethinking how they earn trust and create loyalty among what are arguably itinerant workers?

While some might simply say the only rule is to treat people the same, academics are questioning this. “A common mistake employers make is to treat freelancers too much like actual employees, expecting them to respect a strict nine to five working day,” argues Christine Naschberger, professor of management at Audencia Business School. “‘Gig’ employees are – by their very nature – motivated by a work/life balance, autonomy and flexibility, so must be given this.”

But she accepts there’s a risk inherent in this too: “If they are treated too separately feelings of inequality, unfairness, jealousy or envy may arise.” All of which means, she argues, that HRDs must have some concept of how they’re going to deal with gig economy workers.

“The gig economy isn’t going away, so it’s incumbent on HR to start to consider this new composition of their workforce as the norm,” says Andy Campbell, human capital strategy manager at Oracle. “Broadly this means the principles of what makes good engaged staff should stay the same, but I feel it needs a different type of management.”

Campbell’s big concern is that contractors are still seen as somehow aloof from the business – especially when it comes to being included in L&D. “Our own research finds 40% of employers still think gig workers should be responsible for paying for their own training, but our view is that employers must start to treat their gig cohort as they would their normal full-time employees and train them too,” he says. “While they often bring skills the business doesn’t have, it doesn’t mean new skills can’t be offered back, like opportunities to be mentors. This is often what turns these people on.”

This could be seen as a cost, but according to Craig McCoy, interim HRD at care home provider Sunrise Senior Living, not prioritising gig worker engagement is more likely to harm the bottom line. He says: “We have so-called ‘bank’ workers – a pool we can call upon to fill shifts – and they comprise about 5% of our workforce. For us it’s vital these people are more engaged with us than any other employer that they might have relationships with.

“It’s a skills shortage market out there. We want them to prefer us if occasions arise when other employers want them at the same time. Creating engaged people means we can make huge savings on agency fees.”

Sunrise runs both virtual and in-person communities, as well as social clubs to ensure contractors feel part of its culture. “We want these people to feel like they’re employees even if technically they’re not,” he adds.

Other firms are looking at fostering greater engagement from an onboarding perspective. “We can already see that our current 400 permanent staff will be more like 250 in the near future, with others coming in as-and-when on a project basis,” says Iain McMath, CEO at Sodexo Engage. “As such we’re about to start half-day – paid – induction sessions for all contractors. We feel it’s vital that everyone is on the same page, and our view is that if people know what we’re about they’ll be confident in what they’re doing, and feel involved too.”

A problem with engaging gig economy workers, however, is that even though many HRDs want them to feel part of the fabric of the organisation, from a legal and technical (pay and benefits) perspective they are not. Some believe this different status itself causes a ‘them and us’ attitude, but others argue contractors don’t actually want to be part of the business and actively repel advances to encourage it.

“We are consistent in all our policies, but contractors in our sector [IT] simply want their day rate and to get out of the door. They’re not interested in sharing know-how or integrating, as it’s their knowledge that makes them valuable,” reports Lee Phillips, talent acquisition manager at Now Healthcare, Europe’s largest digital health company.

Phillips says contractors can be so difficult to engage he actively tries to avoid them: “They have a great work ethic, but we’d much sooner have permanent employees just because they are culturally a better fit.”

Duncan Brown, head of consulting at the Institute for Employment Studies (which recently interviewed 170 gig economy workers for a soon-to-be published response to the Taylor Review), agrees that shifting too far to a gig economy model could compromise engagement levels. “This wonderful world of employment coming from a mixture of permanent and non-permanent workers doesn’t exist,” he asserts boldly. “If employers really value engagement I feel it’s too risky contracting out their key roles. Employers need to ask themselves what sort of workforce they want.”

The key to engaging gig workers may be finding out why they’re working this way in the first place – which will differ from person to person. Professionals who have a scarce body of expertise and skills are at one end of the scale, and the low-skilled/under-employed are at the other. The consultancy McKinsey argues that 14% of gig economy workers are so-called ‘reluctants’ (those who would rather have permanent employment), while a further 16% are financially strapped and doing extra work out of necessity.

But a common need among all comes back to gig workers wanting to feel valued, insists Jenny Perkins, head of engagement at Cirrus. “No matter how transient gig workers are it’s crucial HRDs don’t treat them merely as a flexible resource,” she says. “They need to get to know them. Gig workers can be great change agents and can overcome resistance to change within a legacy workforce.

It’s vital firms offer, and seek their feedback, and articulate how their contribution matters.”

She adds: “It’s worth remembering that full-time employees can stay for less time than a contractor, so the two types of worker can’t be seen as less or more worthwhile investing in than the other.”

Kathryn Kendall, chief people officer at Benefex, agrees. “I’ve found that what keeps gig employees engaged is true flexibility,” she says. “If they suddenly find themselves with a clear weekend and nothing much to do they can clock up the hours then and give themselves time off during the week. This is the sort of deal they expect. It’s the reason so many of those who have been self-employed find it hard to return to the workplace.”

According to Campbell, measuring engagement – and slicing the data according to type of employee (permanents, contractors, part-time workers etc.) – is a fundamental first step. “You don’t necessarily need to ask different questions, just ensure the outreach is there,” he says. “What comes back could be valuable data.

“There’s a difference between those who don’t want the office politics, but do want to experience a good office dynamic, so it’s best not to assume contractors are prickly temps just there for the short haul,” he adds.

Keith Robson, a gig worker himself as former interim HRD at Rolls Royce and NATS, reflects on the importance of rewarding, challenging work. “On the one hand the whole appeal of being a gig worker is not to get too attached corporately,” he muses. “At Rolls Royce, which had significant contractor numbers, there was no real strategy to engage these people differently – they sort of did their work and that was how they preferred it.

“[But] as someone who is a project worker I know what engages me: and that’s being given work that stretches me,” he continues. “I know other contractors who are expected to do what they’re given; the sort of stuff they were doing 10 years ago. My philosophy is ‘engage with me and I’ll engage with you back’. When gig workers know they’re doing meaningful work, with real outcomes, that’s when they become brand ambassadors.”