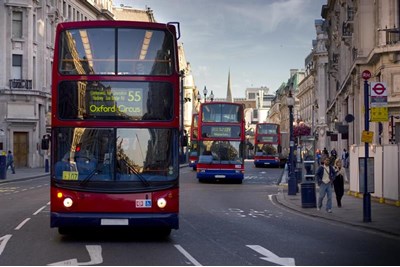 This seems to focus on journey times alone. Whilst this is of course the important part of a commute, has it been adjusted for distance ? Is it that the same distance is taking longer due to ...

The TUC has called on employers to offer more flexible working options, revealing that commuting times have increased from 53 to 58 minutes over the past 10 years

Rail commuters face the longest journeys, taking an average of 131 minutes a day – an increase of four minutes on 10 years ago. Drivers spend 52 minutes on the road to and from work, up by three minutes. Meanwhile travelling by bus saw the biggest increase, up seven minutes to 79 minutes per day.

Cyclists (44 minutes) and walkers (29 minutes) have the quickest daily journeys, although these healthy alternatives still take longer than in 2007, up six minutes and two minutes respectively.

Low government spending on infrastructure, employers not offering flexible and home working options, and falling wages are to blame for lengthy commutes, according to the TUC.

The union highlighted that BAME employees are particularly affected, with the average worker travelling for one hour and nine minutes, compared to 57 minutes on average for a white worker.

UK census data shows that BAME individuals are more likely to live in urban centres, especially London, with BAME workers in the capital also twice as likely as white workers to travel by bus. These workers have lower average pay, and are more likely to work nights which means they are more likely to be reliant on night buses, according to the data. To save money they may also be more likely to choose long bus journeys instead of faster options, the TUC added.

Frances O'Grady, general secretary of the TUC, called for greater investment in public transport. “It’s great we’re investing in high-speed rail between some of our major cities. But people more often use their local buses and trains on their daily commute. These need to be upgraded too," she said.

She added that employers could help through offering flexible working options. “Employers can make a difference too. Home working and flexitime can cut journeys and help avoid the rush hour. And if staff have fewer stressful journeys they can focus better on their work.”

Long commutes are increasingly becoming a normalised part of working life in the UK added Phil Flaxton, chief exectutive of not-for-profit Work Wise. “Long commutes have become a part of the UK’s working culture. But the excessive time spent commuting is one of the main factors contributing to work/life balance problems,” he said.

“Not only is the time spent commuting an issue, the nine to five culture with its peak travel times generates congestion. And the rush hours on railways, Underground and road networks increase stress for commuters.”

Flaxton emphasised that cutting commute time for employees would significantly improve worker wellbeing: “The overall message for employers is that job satisfaction can be improved, and stress levels reduced, if workers have opportunities to cut their commuting time. That could mean working from home occasionally or staggering their hours. It could also be good news for employee wellbeing and retention, with lower costs to businesses.”

This seems to focus on journey times alone. Whilst this is of course the important part of a commute, has it been adjusted for distance ? Is it that the same distance is taking longer due to infrastructure inefficiency ? Or is that people have chose to move farther away from where they work to find a better quality of life out of urban centres (which has increased journey times) ? Or is it that companies have relocated and, if people have chosen to stick with their employee, they have accepted marginally increased commute times/distances in some cases ? Or is it that a car driver with a 44 minute commute has moved closer to their place of work, and now cycles instead - which also takes him/her 44 minutes ? Have people been driven out of urban centres by high property prices ? - seems like no-one in the TUC is talking about that. Why not lobby for affordable housing close to urban centres of work ? My guess is that all of these factors figure in there somewhere. HR response ? - flexible working. Is that all ? Really ? Presenting this complex situation as a simple 'commuting times have increased' message is of extremely limited value.