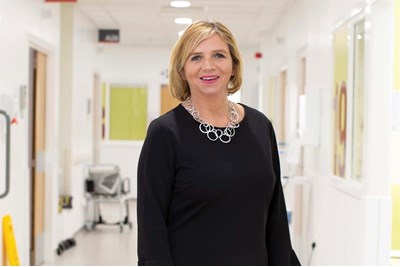 To tackle the shortage of doctors one NHS Trust is upskilling from within, as well as developing leadership training to retain the talent it’s got

To say the NHS is facing one of the most challenging times since its inception would be to put it mildly. Barely a week passes without headlines of staff shortages, inadequate funding, pay freezes catalysing strike action, and too few beds… not to mention Brexit putting a further squeeze on talent shortages in a sector that relies heavily on workers from the EU.

When HR magazine meets Claire Gore, director of HR and OD at London North West University Healthcare (LNWH) NHS Trust, at her office inside Northwick Park Hospital, we get a sense of these challenges firsthand. As we manage to find a rare quiet ward for the photoshoot Gore explains that this hospital is home to one of the busiest A&Es in the country, with around 325 patients and 130 ambulances arriving at the department every day.

“There is a crisis and significant challenges in some areas and there isn’t going to be an answer tomorrow,” says Gore. “The key question for us is: what are we going to do and how are we going to build a workforce that’s fit for the future?”

Gore is no stranger to what NHS funding cuts mean on the ground. When she arrived from Hillingdon Hospitals NHS Foundation Trust in 2016, LNWH hadn’t long been formed off the back of a 2014 merger. The resulting integrated organisation, which brought together Ealing Hospital, Northwick Park Hospital, Central Middlesex Hospital and all their community services under one Trust, is one of the largest in the UK and delivers care to one million people living in Brent, Harrow and Ealing. It employs 9,000 staff: from therapists and pharmacists to nurses and doctors. Everyone apart from facilities staff sits under HR’s remit.

But while the sites were merged in principle Gore’s initial diagnosis was that they were “integrated in structure but not really in terms of culture or shared values”. The HR function also “hadn’t really come together”, she adds.

Reflecting the wider NHS the Trust was experiencing high staff vacancies and turnover (14.8% and 16.4% respectively in 2015/16) and a resulting over-reliance on temporary staff.

“In the EU it’s an obvious issue but worldwide there’s going to be a shortage of 18 million healthcare workers in the next five years so this is a global issue,” Gore says. “There aren’t enough [doctors] coming through training and education – so we need to find new ways.”

So top of Gore’s list from the off has been tackling staff shortages. Key to this has been a restructure of HR and reallocation of recruitment powers, putting in place HR business partners whose job is to drill down into turnover hotspots and work with staff to develop recruitment campaigns and action plans.

Gore adds: “HRBPs were put on a development programme to help them understand they aren’t just ER managers but to show them what a real BP could do.”

LNWH is also looking at “how [it] can develop the workforce [it’s] already got” to fill the gaps. “We have to grow our own,” explains Gore. “There’s not going to be enough doctors in the future so let’s develop our nurses and bright young things and make them supernumerary.”

This includes a programme that upskills nurses to become advanced care practitioners, meaning they can undertake some of the tasks normally required of doctors; the Trust also funds their education and assigns them each a consultant mentor. This taps into a talent pool already equipped with the necessary medical experience and knowledge of working at the Trust, “which is a really good way to develop your nurses and keep them”. Gore reportsthat two programme participants are just about to replace junior doctors on the emergency department rota.

It’s hoped the scheme will add to the progress already made since Gore’s arrival, with vacancies down to 10.4% and turnover 12.4% as of October 2018. And it seems to be attracting much interest on the wards. In-between smiles for HR magazine’s photographer, Gore chats to an emergency department nurse singing the praises of the opportunity to send the ward’s best talent on the programme.

Gore’s focus on developing the existing workforce has also extended to her own backyard. Since arriving she’s built LNWH’s OD function “from scratch”, recruiting an associate director and OD advisors for the first time. “There was no OD function at all, which is really strange for a Trust that’s gone through a merger,” she comments, reflecting that this could be a symptom of the fact that many in HR are still grappling with what the field of OD can do for them. “It means so many different things to different people,” she notes.

Bringing an OD lens to HR at LNWH has translated into much greater focus on manager and leadership development. “From the work we’ve done around why people leave and join us, we can see a lot of people value education and training… but looking at how we developed talented managers in the past there was none of that really,” Gore explains.

“Our clinicians are fantastic at medicine but not necessarily fantastic at leading and managing and quite often were put in roles they didn’t really understand. So we’ve developed a top leaders’ course.”

There’s also a BAME leadership course to develop more diverse talent. “More than half of our workforce are from BAME backgrounds, which reflects the communities we serve, but once you get to senior levels like Band 8A and above [senior NHS positions] they’re under-represented,” she says.

But Gore is first to admit these initiatives will only go so far given the current context of the NHS. “The issue with the NHS is time to think. It’s very much target-focused and about delivering operational performance and that’s what we get measured on – your A&E target, your treatment referral target, your cancer target…” she explains.

Maintaining focus on both operational needs and people development is a difficult balance for Gore’s team to strike. “Trying to get people into a room to talk about talent development when they’ve got patients spilling out and no beds is difficult,” she says.

“Even with core skills training half the people don’t turn up to the course. If suddenly A&E is busy or there’s people off sick wards can’t just release their staff to training. But we’re trying to help staff get the headspace to go off and develop.”

Gore highlights how much is at stake in ensuring this reflective headspace in terms of improving retention and staff satisfaction as a result. “There’s a proven link between staff engagement and patient outcomes, so in Trusts where staff are more engaged they have less patient mortality,” she says, adding that quality of care is also poorer when there are more temporary workers filling shifts.

Galvanising staff around a new set of shared values – HEART (standing for honesty, equality, accountability, respect and teamwork) – has been paramount to turning around low engagement. “We ran a lot of staff forums and asked them what was important to them, and met with patients as well, and then put it to a vote and came up with HEART,” Gore says. “And we keep on building on it to develop our EVP.”

But keeping a workforce engaged in the face of UK-wide pay caps and pay freezes, and significant strike action in recent years, is no simple task: “It’s a lot like dealing with molehills – you put one down and another one pops up,” says Gore.

One particularly significant molehill has been junior doctor strikes over pay, which culminated in the first all-out strike in history by junior doctors (meaning they also withdrew from emergency and routine care) back in April 2016. NHS England figures found that a total of 21,608 junior doctors participated in the industrial action, accounting for almost four in every five working in the profession.

“Each time this happened we said ‘we recognise you have a right to strike and we’d appreciate if you tell us if you’re intending to so we can backfill shifts for patient safety’. So we didn’t have to cancel any patients – we try to support them to take action.”

Connecting with this demographic has proved a particularly tough challenge though. “The issue with junior doctors is really hard; it’s a challenge for them to have a relationship [with the Trust and colleagues] because they rotate so much. So how do we get buy-in from a transient workforce?” she says. “There are more junior doctors taking a break from training than ever or going off and working abroad.”

So the Trust has introduced a junior doctors’ forum, where long hours and other concerns are fed to a guardian who Gore and the medical director meet with on a monthly basis. Mindfulness training and an employee assistance programme are also being launched out of “concerns that some junior doctors are struggling to cope”. “But there’s still a way to go,” Gore concedes.

Another molehill has been the uncertainty around international employee status that Brexit has thrown into the mix; the Trust currently employs around 650 staff from the EU. The day HR magazine meets Gore LNWH has just sent letters to all EU staff to say they’re valued, the Trust wants them to stay, and that it will pay the £65 fee (since scrapped by the government) for each of them to apply for settled status to remain in the UK.

“We’ve also sent messages out to them [EU staff] regularly saying we value them and I think this is sending a positive message to people,” says Gore. “We haven’t seen a huge turnover of staff leaving but there has definitely been a slowdown in recruitment. But then we anticipated we would get a shortfall because of all the uncertainty, so we are planning more overseas [non-EU] recruitment.”

“There’s been a history of people coming into the NHS as HRDs and leaving, so there’s now a programme for HRDs joining from outside the NHS,” reports Gore, adding though that anyone taking up this role needs to be aware of how tough it can be. “I’m not ‘bigging it up’ at all – it’s very complex and you don’t have as much resource or money as other organisations,” she warns.

Gore is no stranger to rising to a challenge though, having started her HR career as a 22-year-old entering the Metropolitan Police’s special branch as one of its first civilian HR managers.

“The force was very male-dominated and I was taking over from a male chief inspector who had been in charge of personnel and it was my first HR role… where people didn’t really understand what HR was,” she says. “So it was challenging on a personal level but also on a cultural level as it was sort of ‘civilianising’ a police officer role. You didn’t have police officers in charge of HR anymore.”

It was also a time of “a lot of distrust” in the police, following the murder of Stephen Lawrence and publication of the Macpherson report.

“I developed a programme to make the police reflect more closely the areas it served,” Gore says, adding that all officers were put through diversity training. The force she left 19 years later was in a very different place in terms of culture and diversity, she reports: “Things that were once acceptable were no longer acceptable and things had been made more transparent”.

While Gore describes her move to the NHS as her “steepest learning curve” it’s a sector she clearly has huge passion for. “I’ve always worked in the public sector and you’re always thinking about improving people’s lives,” she says.

“What’s really important is that the way people behave, the way we train them, and if we have enough people, has an impact on people’s lives. That’s what always keeps me going.”