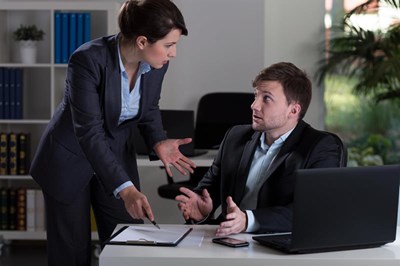 Hi Jeff, I could not agree more. Just because someone excels in their role and consequently promoted to a manager; does not automatically equip them to become competent in people and emotional ...

A YouGov and MHR survey of 2,006 employees found that 75% of workers who have experienced this have considered leaving a job, while 55% had actually quit their jobs because of bad management.

The research suggested a lack of people skills among managers, with 58% of respondents saying that they did not think managers were equipped to deal with the human or emotional sides of their jobs.

Bullying, micro-management and aggressive and threatening behaviour were all cited as examples of poor management. Others described managers as out of their depth, lacking the necessary people skills, and failing to offer recognition and feedback.

Cary Cooper, professor of organisational psychology and health at Alliance Manchester Business School, said that an insecure economic climate is partly to blame.

“I’m not surprised by the findings,” he told HR magazine. “Since the recession we’ve seen less job security, less social mobility, and consequently a more ruthless approach towards management. We have managers who have the skills, but don’t have the compassion or the emotional intelligence needed for the job."

Cooper said recruitment processes must be revised to test managers' interpersonal skills. “It’s important for employers to take their time over hiring a manager, and make sure that there are non-traditional assessments in place to ensure an organisation has the right person for them,” he said.

However, associate professor at Henley Business School Charmi Patel said employers must also consider supporting managers better to improve their people skills. “While it’s absolutely true that there are bad managers out there, most will improve over time with experience and support; like anyone else,” she said.

“If we want to reduce poor management we should make sure that they are receiving the coaching, education and personal development they need to understand exactly what makes a good manager.”

The YouGov research was conducted on behalf of HR and payroll solutions provider MHR.

Amazed the figure is so LOW! Especially in view of the wording "at least once in their career", My experience is that much of British management is lacking the necessary skills and often the integrity needed to effectively manage a group. Too often we tend to associate technical competence with management ability whereas what is often lacking is true leadership. Britain could greatly increase productivity if only we had better managers - and all too often the higher management levels fail in effectively managing the lower levels of management - with obviously disappointing outcomes.

And In among these bad managers is a small but significant group of characters who are Machiavellian and psychopaths. These people ruin the lives of their employees in ways that it is hard to fathom. I had to leave one extremely good job that I had been dedicated to for nearly two decades because of a madman. He ended up putting his pursuit of vindictive gratification before the well being of the organisation, and steered his ship onto the rocks. Having done this, he ran away. Several of us have kept in touch and for every single one of us it took time to recover from the impacts that this man had on our lives.

Jeff you are so right! Unfortunately existing leaders lack the insight and emotional intelligence to recognise that the leadership and management behaviours they value and the individuals they promote are mini-me versions of themselves and will only succeed in perpetuating the ongoing theme of poor leadership behaviours. The outcome will always be the same - lower levels in performance and productivity and reduced wellbeing levels. I welcome the day when I see someone promoted for the people and leadership ability they possess - all too rare an event.

Hi Jeff, I could not agree more. Just because someone excels in their role and consequently promoted to a manager; does not automatically equip them to become competent in people and emotional management. Most organisations have management training programmes and many do not mention the human aspect of management, they focus on process and policy. Therefore in some cases, the employer creates the bad manager. The other key missing is employers simply expressing the cultural values and behaviours required by the workforce. On Friday I will be posting a full analysis of the research (LinkedIn) highlighting the key issues and causes of bad managers and how to remedy these situations. I hope you find it useful. Regards Julie

I was shocked, but maybe not completely surprised. I have spent my career in both private and public sector personally trying to be the best manager I could be but also implementing management and leadership development initiatives with a focus on the direct link of managers behaviour to productivity, well being attendance and performance. Seems like a rethink is needed on what is the role of a manager and how they are managed. Helen Director Entwyne Ltd