Will lockdown prove to be a creative desert or oasis? 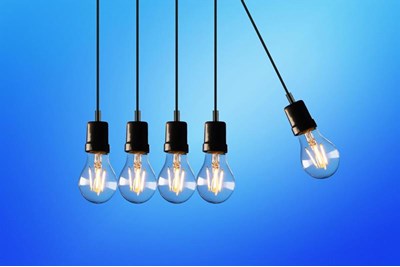 Mark - interesting suggestions but perhaps have a look at some data too? There's plenty of evidence now suggesting that discretionary, weak tie relationships have suffered due to remote working. And ...

The Bank of England’s chief economist Andy Haldane gave a speech last month to the Engaging Business Summit, where he claimed that the pandemic had “reshaped our working lives, our economic contributions and our wellbeing”.

He also stated, quite correctly, that creativity was important because it fuelled innovation and innovation was vital for the health of the economy.

However, the main thrust of his argument, with which I do not agree, was that working from home stifles creativity.

He bemoaned the loss of working relationships and external stimuli, the chance conversations in corridors and the lack of face-to-face contact with colleagues. This was apparently leading to a loss of “social capital” and a lack of “creative sparks”.

This is quite possibly the case if you are a strong extrovert who thrives on the energy of those around you Margaret Thatcher, Steve Jobs and Muhammad Ali were all extroverts. But if you are an introvert like Barack Obama, JK Rowling or Albert Einstein, it is the very absence of chance conversations in corridors and the lack of face-to-face contact with colleagues that provides you with the blissful isolation you require to be at your creative best.

Haldane also stated that “home-working means serendipity is supplanted by scheduling, face-to-face by Zoom.” I find it very hard to believe that the office environment in most organisations lends itself to very much serendipity when it comes to the birth of light bulb moments.

Indeed a study on creativity, carried out by Genius You on over 2,000 individuals found that time poverty and process overload were two of the main culprits responsible for the absence of creative output in the workplace.

And a third culprit, in fact the biggest of all, is the one that Haldane champions – an absence of cross-pollination and sharing of ideas amongst employees. People might be located in the same building, but this does not mean that they are necessarily talking to one another.

And what about Zoom? Hero or villain? When it comes to the creative process, my personal view is that it has the potential to play the role of the former. It gives us the perfect opportunity to choose the people we want to invite on the call and be mindful of the time that we spend together as a group of six or 60.

It’s a relatively new medium that will take some getting used to, but one thing that it does do is encourage us all to hone the core skill absent in most face to face interaction – the art of listening.

And to be perfectly honest, if I wanted to get inspiration from the world around me to fuel my creative thinking, I probably wouldn’t rely on those chance conversations with colleagues doing similar jobs and coming from similar backgrounds. I would turn to the greatest source of inspiration and diversity known to mankind – the internet.

So in the same way Haldane is responsible for balancing the books to ensure that our economy says afloat, I would ask him to balance his argument when it comes to the home vs office debate. We have a once in a lifetime opportunity to change the way in which we live and work. We need a bold ambition for how best to maximise the hours between nine and five.

I would be disappointed if influential people in senior positions simply encouraged everybody to get back on the 7.42am South West train from Guildford to London five days a week once COVID-19 departs our shores.

If that does happen, I urge all introverts to stay put in your creative oases.

Mark Simmonds is founder of Genius You

Mark - interesting suggestions but perhaps have a look at some data too? There's plenty of evidence now suggesting that discretionary, weak tie relationships have suffered due to remote working. And it is these that are vital to social capital around innovation. Yes, Zoom and other technologies provide the potential for maintaining these relationships, but it's not the way we've been using them to date. And the internet doesn't co-create with you, so it may provide useful information and inspiration to stimulate new ideas, but it doesn't lead to ah-ha moments in the same way as serendipitous conversations in the corridors. Home working may lead to new opportunities for creative thinking, but Haldane was quite correct in pointing out what we've lost.