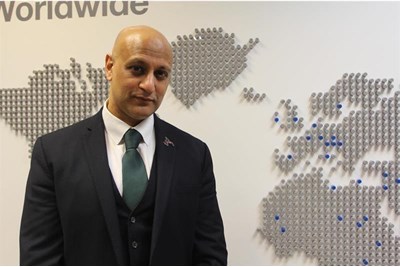 Thanks Shakil for an interesting view. I agree that racists need to escape their narrow views. I'm arming myself for this challenge with some great books. The chapter on Echo Chambers in Matthew ...

The scenes of the weekend were ugly with ‘protestors’ gathering in central London to supposedly defend Churchill’s statue from the planned Black Lives Matter protests.

Churchill’s statue had been targeted by a small element amongst largely peaceful anti-racism protestors, with one protestor graffiti-labelling Churchill as a racist.

As news footage has shown this weekend, this was not a counter protest or an attempt to defend Churchill’s statue from being targeted but a gathering of mostly white, racist males intent on disorder and violence.

It was a reaction to the Black Lives Matter global movement and possibly borne out of a feeling that their white privilege had been called out, there was a real risk of acknowledging the racism that has affected society and a change was potentially going to happen.

As they violently faced off against the police, ironically giving Nazi salutes and singing Rule Britannia harking back to Britain’s colonial age, this was not a small minority of protesters but an assembly of far right racists drawn from the English Defence League and the Football Lads Alliance.

What we saw had nothing to do with defending England or football. Whether attacking people in Hyde Park, urinating on a memorial or chanting ‘we are racist, we are racist and that’s the way we like it” was shocking to see. This was most certainly not ‘our finest hour’.

Was Churchill a racist? Definitely. A white supremacist? Absolutely. A war hero? No doubt.

Churchill was a complex wartime leader. He is often quoted and represented as having the British bulldog spirit of never giving in and to keep pushing forward. His views as a white supremacist are less well known.

The impact on the Palestinians, native Americans, Aborigines and countless others that have suffered for no other reason than their race at the hands of white oppressors is a blight on human history. A truly superior race would surely be looking to help the less fortunate in society rather than pillaging, looting, raping and massacring their fellow human beings.

Churchill led Britain to victory giving us the very freedoms that we enjoy today so arguably deserves to be remembered and commemorated. He was the leader we needed to fight Hitler’s Nazism. What is often overlooked and forgotten is that it was not Britain that defeated Hitler but the British Empire and its Allies.

Without this contribution, in terms of manpower and financial resources drawn from the lands populated with people of colour from Africa and Asia, those freedoms would not be enjoyed today.

Without the Windrush generation coming to Britain post war to supply manpower to rebuild Britain as well as the wealth taken from the Empire lands by force, we would not be a developed nation today. This historical amnesia is borne out of institutionalised racism that white washes the narrative.

A great debt is owed to all the people who fought for Britain, white, black, brown from across the British Empire. People like my father who was part of the British Army who settled here in the UK post war, working on the shop floor, post- recession like many of the Windrush generation.

He was not thanked and welcomed but treated like many blacks and Asians as outsiders in a society that gave rise to the National Front, the precursor to today’s far right organisations like the English Defence League, the British National Party and Britain First.

These racist thugs caught on camera are not nameless or unknown to wider society and nor should their vile actions be tolerated in a multicultural developed community.

They should be charged for inciting hatred and crimes against humanity especially those who have been filmed being violent. Criminal action should have the full force of the law but will it change mindsets? I doubt it. It may even be seen as a badge of honour in their racist networks.

Assuming that they have jobs, their employers should hold them to account for their behaviour and racist views outside of work. Personally I do not see what value it would bring to discipline a racist.

What these racists need is to escape their narrow world view, be re-educated about the contribution of people of colour to British society and spend time with someone who is different to them to see their shared humanity.

I would like to see these so-called ‘statue defenders’ be enlightened. To see employers defend our statutes of legislation, have these racists escape their white ivory towers and spend time with someone who is visibly different to them, face their victims, see past the pigmentation and see the person looking back at them.

In a day of darkness was the image of Patrick Hutchison, a black anti racist protestor, carrying away an injured racist 'protestor' for his safety and protection (no doubt to be treated by a BAME NHS worker) showing the world what compassion and humanity really looks like. Possibly Britain’s finest hour this weekend. Will this particular racist rethink his position in light of Hutchinson’s selflessness. Will others? I can only hope so for all our sakes.

Thanks Shakil for an interesting view. I agree that racists need to escape their narrow views. I'm arming myself for this challenge with some great books. The chapter on Echo Chambers in Matthew Syed's Rebel Ideas and Adam Rutherford's How to Argue with a Racist are two I strongly urge as many people as possible to read. I feel deeply saddened that so many people close their minds to a wider view than offered by their narrow group. Opening a respectful dialogue (including peaceful public protest) with the intent to understand others better would, in my view, be a more fruitful exercise than defacing public property, attacking people you don't know and repeating hateful views without checking their provenance or validity.

Great article by Shakil, which has really challenged my cosy pre-conceived views on racism. To put this into context, I am a white British male brought up in a narrow social strata in the 1950s. The recent BLM movement, together with the BBC documentary on the Windrush generation, has shocked my naive belief that institutional racism is mainly a legacy of the past. I can understand in the post-war imperialist era why 'Britishness' was defined by the colour of your skin. What I can't reconcile is why political leaders today are still employing blunt measures to suppress immigration and multiculturalism. Yes, I do worry about losing our national identity but not to the extent of perpetuating white supremacy, xenophobia and isolationist policies. We have a proud human rights record but it is blighted by an establishment wracked by misplaced fears and insecurities. We cannot truly call ourselves 'One Nation' without tackling racism head-on and achieving true equality and integration.