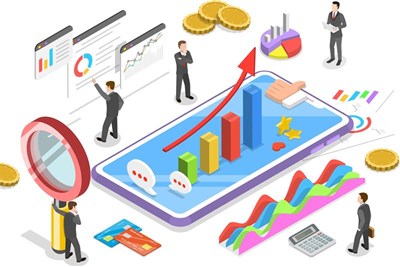 Digital technologies have created an inflection point in our taken-for-granted assumptions about organisational control structures and how these relate to growth. Economist Edith Penrose posited that the growth of a firm would follow a characteristic pattern in which managers identify opportunities for growth, mobilise resources to capture the opportunities, but then find that growth slows initially while they build repeatable processes and recruit and train new managers. Digitisation has changed this pattern in ways Penrose could not have envisioned. Three specific examples include exponential growth companies, companies acting as platforms bringing together two-sided markets, and the rise of access to assets rather than ownership of assets.

Many of our assumptions about the limits to growth come from the work of British-American economist Edith Penrose. But digital technologies that could only dimly be seen during her lifetime have now transformed many of our theories about how organisational co-ordination takes place, creating an inflection point in what is possible. Today firms can operate like markets, creating the capacity to scale extremely rapidly, to act as ultra-efficient marketplaces themselves, and to leverage spare capacity in an ecosystem without having to invest in expensive assets.

In her seminal book The Theory of the Growth of the Firm Penrose identified a pattern of firm-level growth that was subsequently called the ‘Penrose Effect’. Essentially, she laid out why a fast-growing company’s growth slows for a period before resuming rapid growth once again. This had to do with how stretched managers become as they oversee expansion into new territory.

Penrose observed that those she called ‘inherited’ managers know the firm and its capabilities, which are idiosyncratically specific to a given organisation. One of her key ideas was that the same resources used by different managers yield different outcomes – what she called ‘services’. Therefore an important aspect of a business’ competitive differentiation is that these services cannot be easily replicated by outsiders. The services, moreover, accumulate in a path-dependent manner over time, meaning that every organisation has a unique set of capabilities that cannot be traded on open markets.

So her inherited managers operate as entrepreneurs, finding opportunities for growth in new areas in which the firm’s resources might prove relevant. If they are successful their time and attention is completely absorbed by getting the new business up and running. Growth slows while they focus on building out the business expansion. Such managers, Penrose argued, cannot be acquired from the markets. New managers take time to learn about the organisation and its capabilities. Absorbing and training them takes up managerial time, at least at the outset. And so this causes expansion to slow down further. Eventually, however, systems and routines are put in place to manage the expanded firm and managerial resources are once again available for growth.

The advent of digital technologies changes the constraints that Penrose observed in the growth of firms, however. Now we see digitally-driven administrative co-ordination allowing companies to scale more quickly than she would have observed and also to replace administrative co-ordination with market-like transactions. As management consultant Max Boisot presciently observed some time ago, the advent of digitisation makes it possible for increasingly rich amounts of information to be transferred for a given unit of cost, time or distance. This means HR leaders can utilise new communicative technologies – such as Slack – to share information quickly and richly across the organisation, techniques that were simply not possible before.

To put this into perspective, the advent of plain-paper copying represented by the commercialisation of the first Xerox copier commenced in the same year that The Theory of the Growth of the Firm was published (1959).

Successive technologies, including desktop publishing, email and video communication tools, have only accelerated our ability to share information inexpensively and in real time. The next generation of such technologies, incorporating things like virtual and augmented reality and the power of artificial intelligence to identify patterns, will make things even faster.

The first exception to the Penrose Effect have come to be called ‘exponential organisations’. While a typical traditional company might take 20 years to achieve $1 billion in revenue, exponential organisations do so much more quickly, sometimes in a matter of just a few years. Examples include many of the so-called unicorn start-ups: young companies valued at more than $1 billion, such as Slack, Cloudera and glasses manufacturer Warby Parker.

They do this by using digital resources to replace the administrative and co-ordinative functions of management.

Among the techniques they deploy is the clever use of digital interfaces to replace specific managerial guidance. They also encourage rapid and low-cost experimentation and the use of social technologies to keep everyone on the same page.

As richer information is available in an inexpensive rapid manner scaling requires far less of a human touch.

A second new kind of business that promises to grow more rapidly than Penrose might have predicted is the so-called platform business. Platforms have been around for a long time. But their reach and power has accelerated at an astonishing pace. Platform businesses are those in which buyers and sellers come together, mediated by the platform which makes its money by facilitating a two-sided market. Google and Facebook for instance monetise their impressive reach by offering advertisers access to their users. Airbnb connects those looking for accommodation with those able to offer it.

The distinguishing characteristic of a digitally-enabled platform business is its ability to leverage network effects. This means the platform becomes more valuable as the number of people using it increases.

Facebook, for instance, is extremely valuable to advertisers because that’s where so many users spend their time. Once the basic mechanism of connecting the two (or more) sides of a platform has been built it can scale very quickly, as algorithms not managers co-ordinate activities.

The presence of network effects means that the platform creates switching costs – once my network of friends, customers, buyers and so on are on a platform it becomes more difficult for me to switch. In other words there is a cost to leaving the platform behind. When it works this creates a virtuous circle in which more users make the platform more attractive, which attracts additional users very quickly.

A third kind of digitally-enabled business is the asset-light born-digital organisation that can take on incumbents without heavy investments in assets. Obvious examples include any number of internet-savvy start-ups that have begun to eat into the market share of well-established incumbents. Dollar Shave Club, for example, created a huge impact with little more than clever marketing, computing capacity purchased from Amazon Web Services, and smart use of social channels to get the word out about its offering. It was purchased for $1 billion by Unilever in the Summer of 2016, only five years after it was founded.

The effects on traditional incumbents, particularly Procter and Gamble (P&G) with its Gillette brand, have been staggering. P&G acquired Gillette in 2005 for a reported $57 billion. Since the advent of the shaving upstarts its US market share has plummeted to 59% from roughly 70%. It’s been forced to lower prices, create its own shave club, and shift its model to compete with the asset-light new entrants. Harry’s, another digitally-native shaving entrant, was purchased by Edgewell (the manufacturer of Schick razors) for a reported $1.37 billion in 2019.

In each of these cases we can observe entirely new organisational structures and co-ordination practices that wouldn’t have been available in Penrose’s day. It is debatable, however, whether this spells the end of the Penrose Effect.

Even as these new types of organisations soak up venture capital funding and grow wildly, it may well be that their growth is not of the enduring variety. In particular start-ups backed by huge amounts of venture capital money are highly likely to engage in undisciplined behaviour – purchasing their growth rather than earning it (Uber comes to mind). We are now also seeing a wave of once high-flying firms collapse. Munchery, Jawbone and Quirky are just a few recent examples.

Instead of moving up through a classic career progression people now sign up for ‘tours of duty’, and may well move fluidly from firm to firm. Penrose would have predicted that one outcome would be the weakening of a firm’s competitive insulation, as transactions on open markets do not have the idiosyncratic properties so important, in her view, to preserving an advantage once created.

A question, then, is whether the firms that figure out how to get people to stay with them will in the long run enjoy more robust and enduring growth. HR will be under pressure to create a context in which the best people want to come and want to stay. One traditional role – managing retention – therefore does not disappear. And it can’t just be window-dressing. Social media and specialised sites such as Glassdoor make it easy for unhappy or disgruntled employees to share their feelings.

A major implication is that just as marketers and designers need to think of the customer experience, someone – hopefully HR – is responsible for designing an equally compelling employee experience from onboarding (and that all-important first day) through acculturation, job rotation, development and decision-making. And an employee’s environment no longer consists of standard office stuff; it also matters if they have access to good technology that works and to a working environment they’d be proud to bring their friends and family to see.

To add to the complexity the workforce no longer consists just of employees: critical roles can be held by contractors and consultants as well. As IBM CEO Ginny Rometty said of her CHRO, her job was to change HR from a service organisation to an engine of growth. Keeping all this moving is strategic.

Rita McGrath is a bestselling author, speaker and professor at Columbia Business School

This piece appeared in the September print issue. Subscribe today to have all our latest articles delivered right to your desk.