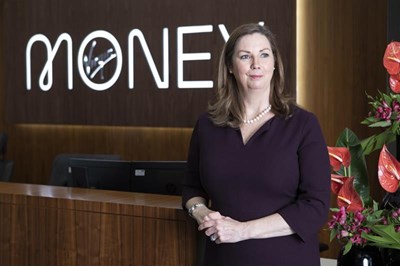 Virgin Money’s group HRD had the tricky task of fusing three brands together to create a new type of bank. She has changed reward, performance management, engagement and more

It’s the day after Britain was battered by Storm Brendan, and group human resources director at Virgin Money UK Kate Guthrie doesn’t half know it.

The ‘new’ bank – which formed in 2018 when the Clydesdale and Yorkshire Bank brands agreed to buy Virgin Money for £1.7 billion – sees her regularly jetting between Glasgow and London, and with gusts up to 50 miles per hour at City Airport her arrival was fairly eventful.

“People spontaneously applauded when we touched down. It’s something you don’t quite expect from seasoned executive flyers,” she says.

But the odd bumpy landing and turbulence could both be events Guthrie faces more of in the next 12 months. With all the necessary regulatory and administrative loose ends of the acquisition now complete [all 9,500 staff of the newly-created entity officially became Virgin Money employees in October 2019], converting its network of Clydesdale and Yorkshire Bank branches into Virgin Money banks starts in earnest, including the inevitable ‘rationalisation’ (i.e. closures) this entails.

And it’s not just fusing together two very different companies that Guthrie has on her plate (Clydesdale and Yorkshire hark back to 1838 and 1859 respectively, while the irreverent Virgin Money formed in 1995). Her work comprises a rebrand and new definition of values at a time of great uncertainty for staff.

“Some 73 stores are already under Virgin Money, while three Virgin Money flagship branches opened in December in London, Manchester and Birmingham.

"This leaves 62 Clydesdale Bank sites and 84 Yorkshire Bank branches to follow in the next 18 months,” says Guthrie, who joined Clydesdale Yorkshire Bank Group (CYBG) in 2016 having previously been HRD, culture, capability and engagement at Lloyds Banking Group.

“But the hard work really starts now. We need to ensure our people give the right ‘Virgin’ customer experience, based on having a new sense of pride for who they work for.”

CYBG’s decision to ditch two well-established, solid, regional brands and take the name of the acquired company was simple.

“It’s the power of the Virgin brand,” says Guthrie. “It speaks of innovation and being non-traditional – all the things we want the new entity to be.”

She says: “Banks are changing so we needed to change; we need to be what I call more ‘usefully provocative’. The Virgin brand gives us this ability.”

Before the two companies officially became Virgin Money there was a small window when the three constituent banks were still trading independently, so during this crucial holding period no time was wasted establishing what the new combined entity’s purpose, culture and values should be. And Guthrie says it wasn’t all about Clydesdale and Yorkshire banks subsuming into Virgin.

“On day one of the new group we created our ‘1,000 Voices’ campaign where we formed focus groups, found change champions and invited views to be submitted to really listen to what mattered to our people,” she explains.

“Not only was it so popular it turned into 2,500 voices, but when we compared the words Clydesdale and Yorkshire employees were using with what Virgin Money staff were saying there was surprising symmetry.”

The Group now aligns behind its purpose of ‘making you happier about money’, supported by six new values (heartfelt service, red-hot relevance, insatiable curiosity, straight up, smart disruption, and delightfully surprising), and she’s not leaving it to chance for these to embed themselves quickly.

“They’ve all been added to our performance management frameworks, which will now be structured around how we deliver on and communicate these values,” she says.

Not being afraid of showing she means business is something Guthrie prides herself on. And some of what’s been introduced at Virgin Money are policies that originated at CYBG: “We’d already abolished bonuses based on individual performance – moving towards team-based bonuses – a first for this sector. At Virgin Money this has been deepened.

"The bonus levels people receive can no longer be exceeded by exceptional individual performance. If the business does well, based on our new values, everyone does well. For a lot of Virgin Money employees it’s been great, as previously they didn’t get bonuses.”

She adds: “A lot of people were worried that we’d lose high potentials – as top earners would now likely earn less – but I’ve been able to prove the opposite. At CYBG organic turnover of this group was 10% previously. After the changes it was 5.5%.”

To further ensure values are embedded Guthrie has introduced the ability for staff to give feedback on anything (but attributed to at least one of the six values).

In the first year more than 150,000 pieces of staff feedback were given. The executive team frequently run ‘Let’s Talk’ town hall-style events where staff can ask the bosses anything. Guthrie attributes both for maintaining colleague engagement at near similar levels. Pre-acquisition it was 77%, and post-acquisition it is 76%. This is despite inevitable uncertainty.

Which brings her to the obvious impact of crashing two firms together – reducing duplication and branch rationalisation.

“The one thing I’ve learned about organisational transformation – especially dealing with job losses at Lloyds at the height of the banking crisis – is that it’s all about ‘how’ you do the inevitable,” she says.

“We obviously want voluntary redundancy first, but there will be mandatory losses. But we are unionised. We take what unions say extremely seriously, and there is a programme of outplacement support and good severance packages.”

Also being done (where possible) is swapping people due to be made redundant into positions where there are people that already want to leave. “It’s called ‘bumping’ – I don’t like the word but it does the job,” she says.

The level of organisation needed for an acquisition, organisational redesign and rebrand has seen Guthrie boost her own HR team, but she already knows the size it will eventually go back down to.

“Some of these people may know their role will finish when all the integration work is complete,” she says, “but for many this is just the type of project they want: to gain an amazing amount of experience from, which they can take to new pastures.”

As soon as the integration was announced Guthrie says one of her first tasks was setting out the executive leadership team (which she sits on), including creating a director of integration.

“Joining the two businesses entails a long process of change,” she says. “But essentially this is a project about the ‘costs of doability’ – where HR needs to work out exactly what it needs to do to contribute to the wider strategic aim.”

She adds: “I’ve been very lucky in the fact the board knows how it needs to get to its desired end state. HR are not at all seen as service providers, even though we of course provide a service. Our task is to look at the business strategy, look at our people, and look at where there might be holes we need to fill.”

One example of this is a parallel project designed to build organisational capabilities. Five have now been identified (working with data, the possibilities of technology, experimentation, delivering a human experience, and living the Virgin Money brand), and programmes are in place from the leadership level all the way down.

“Capability is very high on the agenda here,” she argues. “Yes the integration is important, but we also need to ensure we’re fit for business afterwards. We have very lofty ambitions to be a serious, different but quirky bank, so we have to make sure we have the skills we need.”

Technically the integration has already changed the bank’s official status – from CYBG being ‘challenger’ bank status to Virgin Money as a whole being a ‘Tier 1’ bank (the integration gives the combined entity a bigger mortgage book and credit card business). As such, the bank can now be described as ‘systemically significant’ in the market.

Guthrie says: “Although we’re still difficult to place in sector from a market size point of view – we’re bigger than Metro Bank or Monzo [the digital mobile-only bank], but smaller than the likes of HSBC and Lloyds – I do feel our employees are able to carve out a unique proposition. This will be one where customer service is key. Poorly-managed disengaged employees really pull a business down.”

Being ex-Lloyds, which Guthrie reflects upon as “an incredibly well-run business,” the people strategy under her leadership is likely to be in very safe hands.

Colleague engagement scores are now embedded into reward, and she promises to give Virgin Money its own unique feel, but with all the best-practice HR processes in place that she knows larger banks have.

Working for Virgin Money is a choice that she says is already becoming one of the most professionally rewarding so far: “While this is my first foray to a smaller business [all her previous employers were 80,000+ employees each], it’s definitely a business where I think I can make a big difference. Here you can really see the fruits of your labour.”

Successes she has already overseen include CYBG, and now Virgin Money, making great strides to be more gender balanced at executive level and above, and it is on target to be 40% female by the end of the year.

As recently as 2017, when CYBG published its first gender pay gap report, there was criticism that banking brands paid women 37% less per hour on average than men. However, as Guthrie rightly points out, this is largely down to having more women in part-time roles.

“I could simply stop part-time employment and solve the gender pay gap immediately,” she says, “but then you’d be fixing one problem and creating another. It’s all about balance.”

What CYBG actually did in response was raise its minimum salary by 11% to £17,000, to lift the pay of those on lower grades. Innovations in the pipeline now include making more gender-neutral changes – such as improving ‘parental’ (rather than ‘maternity’) leave.

She says: “We could have raised maternity pay, or introduced more back to work schemes, but I think that keeps having children a ‘female’ issue when actually it’s a men’s and a women’s issue.”

The rest of 2020 will definitely keep her busy with the day-to-day HR machinations of joining two businesses, as well as rolling out the bank branch switchovers, but her overall vision goes beyond this.

“I think there’s so much to look forward to,” she says. “There’s the potential to link Virgin Money with other Virgin brands, to offer different benefits or opportunities,” she says.

“We’ve even mooted the idea of having talent exchanges across different brands in the Virgin family.” So maybe instead of getting a plane to work she could soon go via outer space with Virgin Galactic. That would be an experience worth a round of applause.