The hidden tax on being different 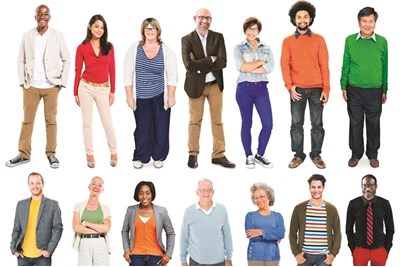 Women, LGBT people, and those from ethnic minorities have to fight much harder to get by at work

There is a hidden tax we all pay. This tax does not build bridges. It doesn’t pave roads or pay for defence, but it is very real. In the US only the total combined federal tax revenue ($3.2 trillion) rivals it for scale. But it doesn’t stop at borders. This tax is collected around the world, and every year vast amounts of money and productivity are lost as a result, impeding growth and stagnating economies. And while everyone pays this tax its most direct burden is placed on those least able to pay it, defying any concept of fairness or economic incentive. This is the tax on being different.

My introduction to this tax started with the story of José Zamora. A few years ago Zamora wrote a blog post that claimed he was submitting more than a hundred résumés a week without any response. So he dropped the ‘s’ from his name and everything changed. ‘Joe Zamora’ was in demand in a way José could only envy.

Though Zamora’s claims might seem exaggerated, there is ample research suggesting that his experience is real. When given identical CVs controlled studies find that many employers:

Given this large and growing body of research the classic claim ‘I had to work twice as hard to get where I am’ takes on a whole new character. Unfortunately the broader world can be very suspicious of ‘research’ that counters their personal beliefs. Beyond the scepticism, even if one accepts the research it doesn’t actually tell us the real-world impact of this bias. To understand the tax we need to quantify the cost for José of achieving the same career outcomes as ‘Joe’ for the same work.

Fortunately I had access to a powerful dataset of 122 million professional profiles collected by HR tech company Gild, where I was chief scientist. From that data I pulled out every single José and Joe (‘Joe’ only, not ‘Joseph’ or any other variant). In the end I found 151,604 Joes and 103,011 Josés, working professionals in the US and Canada.

Even with just the simplest of statistics some interesting stories emerged. For example, a José is more likely to become a MD than a Joe, but a Joe is four times as likely to reach the C-suite. But these simple comparisons cannot qualify the tax because they do not control for the quality of work done by each individual.

To make a fair comparison between Joe and José I leveraged two things: Gild’s technology to score work performance and the economic concept of signalling cost. The former is a technology we developed to analyse thousands of data points that are predictive of quality of work (as opposed to quality of CV). The latter, signalling cost, is a classic story of the peacock’s tail.

Although a male peacock’s tail affords it no real survival advantage it is a signal of the male’s fitness. The idea goes that since only the most fit males can waste energy on the biggest tails females use it implicitly as a proxy for true fitness (much as many recruiters rely on Ivy League degrees). I leveraged the signalling cost concept to ask ‘what does it cost José to achieve the same career outcomes as Joe?’

To further improve the accuracy of my estimates I restricted the Joe vs. José comparison to software developers. Comparing only within a single job vertical removes the variability associated with different job requirements. We still had more than 7,000 Joes and nearly 5,000 Josés in our dataset – thousands of real people writing code for a living. I computed the probability that each was promoted from ‘software engineer’ to ‘senior software engineer’ (generic terms used to cover a broad range of related job titles) controlling for quality of work. I began by looking at one specific signal: college degrees.

To be equally likely to get a promotion José needs a Masters degree or higher, compared to Joe who has no degree at all. This means that, for similar work, José needs six additional years of education. That’s six years of tuition and six years opportunity cost, specifically: missed earnings as a software engineer. This is the tax on being different, and for José the tax is $500,000 to $1,000,000 over his lifetime.

If that number sounds enormous it should. Although my methodology is only approximative and not a formal experiment it reveals diverse sources of bias that accumulate to huge effect.

As I looked into the many ways the tax is levied, it is easy to see how such large numbers pile up. José not only needs higher degrees, but he also needs them from more prestigious schools. Additionally, he must work at more prestigious companies for longer periods before opportunities equalise. Finally, José often needs to be more broadly exceptional, with accomplishments and personal histories that set him well apart from his peers, such as notable awards or a unique background.

If you are José growing up in San Jose, California (the heart of Silicon Valley), wealth, power, and academic accomplishment surrounds you. In a region that often considers itself to be the world’s greatest meritocracy it seems irrational for an intelligent and capable teenage boy to ‘drop out’ of the system, and yet these seemingly irrational decisions are shockingly common.

High-performing students of colour drop out of school at disturbingly high rates despite reporting feeling entirely capable and qualified. In the context of the tax though, this seeming irrational behaviour takes on a completely new light. José isn’t being irrational; he is rationally looking at a world in which he will work twice as hard for less recognition and learn that his hard work will not pay off.

I then applied the same analysis to other groups. Female software engineers in America typically need a Masters degree to compare equally with males’ Bachelors degrees. The difference is not as stark as for José, but it still means the women pay a tax of $100,000 to $300,000.

Research has shown that women leave the business world rather than pursue executive positions at much higher rates than men. They view positions of leadership as equally attainable yet less desirable. Some have taken this to mean women have less interest in being executives, but the tax shows that, like José, women’s personal investments in their careers are being undervalued. With disincentives like these the choice to leave the career ladder becomes rational and universal. Their male counterparts would also leave, should similar career attrition have a similar disincentive. People won’t follow a pipeline that won’t take them anywhere.

The tax is not unique to America. But looking at the tax on women in the east Asian tech industry shows some strong cultural differences. Women often need to have PhDs to be equally competitive for jobs that do not require them, and progression is slower and requires more ‘brand name’ résumés. For them the tax can rise to between $800,000 and $1,200,000. Fascinatingly, in conversations with recruiters and managers they are seemingly completely unaware of the bias. They often claim to have hired women without PhDs until confronted with contradictory data.

The cost for a gay professional in the UK compared to straight competition is $70,000. While this is quite modest compared to the groups described above, imagine if we randomly selected one out of every 10 boys and deducted $5,000 a year for 14 years from their family’s earnings.

The tax on being different provides a different face on issues of bias and discrimination. The tax is largely implicit. People needn’t act maliciously for it to be levied.

The most important thing to understand is that we all pay it. We pay this tax collectively in lost potential, lost productivity, and lost lives. Companies and communities that fail to recognise and elicit the full potential of their workforce will not remain competitive. In modern economies, as automation becomes more common, the value of human capital will increasingly come only from self-motivated, adaptable problem-solvers.

This value is lost when we fail to recognise the fair value of others. While there are costs in addressing bias, the medium- and long-term gains represent massive untapped potential in the economy – potential that might even eclipse the tax itself.

This isn’t just a social justice issue. It doesn’t fall under corporate responsibility. The tax is a drag on the economy and the growth of our companies. Stop making your employees pay it. Stop paying it yourselves. Never accept ‘the pipeline’ as an excuse for your talent problems. Discrimination isn’t done by villains. It’s done by humans – by us. We haven’t failed because we are biased. We have failed when we do nothing about it.

Vivienne Ming is a theoretical neuroscientist, technologist and entrepreneur. She co-founded Socos and is also a visiting scholar at UC Berkeley’s Redwood Center for Theoretical Neuroscience, where she pursues her research in neuroprosthetics