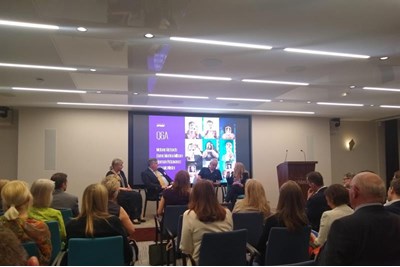 Speaking at a screening of documentary A Northern Soul, a panel discussed the employer's role in tackling in-work poverty and boosting social mobility

Employers must radically rethink the minimum skills and qualifications requirements for jobs to help boost social mobility in the UK, according to chair of the Social Mobility Commission and chief executive of The Prince’s Trust Martina Milburn.


Speaking at an event held by Tomorrow’s Company and KPMG, Milburn said that employers and education policymakers alike must work to end “this obsession with getting maths and English A to C.”

“Companies must have the flexibility to say someone 'might not have the grades but they’ve got the right attitude and I’d like to take them on',” she said.

She added: “I spend a lot of time arguing with HRDs about why they can’t take Prince's Trust people into their businesses. But when they finally agree to do it you see the most fantastic results. They’re very loyal, they’re less likely to go off sick, they’re more likely to go for a promotion, and they feel really invested in the company that’s invested in them.

“And yet 0% of those people would have got through the [traditional] HR processes,” she highlighted.

Milburn pointed to some key findings from her commission’s recent report, which found that social mobility had remained virtually stagnant since 2014. These included that: those from better-off backgrounds are 80% more likely to be in a professional job than their working-class peers, they’re 70% more likely to move regions, and they’re three times more likely to move to London.

“It’s still the case in this country that if you want to move up you have to move out,” Milburn said. “[But] how are you going to survive in London without a family to support you? You can’t do it, so you stay where you are… how does that make you feel? You don’t feel invested in the future, in society, you don’t see an awful lot of hope.”

She added: “Increasingly, particularly among working-class people, I’m also seeing a real anger and if we don’t do something about it young people are going to get increasingly angry. That means they’ll make choices the rest of us find uncomfortable and don’t agree with.”

Milburn added that she “found it very disappointing that there were certain of our politicians that were quite upset that social mobility hadn’t got worse” over the past four years. “How long do we have to continue with politicians happy to play party politics with people’s lives?” she asked. “No-one outside the Westminster bubble knows what social mobility is.”

The event featured a screening of A Northern Soul, a documentary by Sean McAllister set in Hull and following factory worker Steve Arnott as he pursues his long-held ambition to take hip-hop to deprived estates in the city.

The film explores the everyday reality for workers trapped by debt and low pay. It was screened by think tank Tomorrow’s Company to kick off a wider campaign on in-work poverty, for which HR magazine is media partner, which aims to sign employers up to a series of pledges around tacking the issue.

Speaking at the event, McAllister talked about becoming “more and more depressed” by the poor representation of working-class people on television. “I think it’s lazy programme making… fundamentally I think the wrong people were making these films – because people aren’t getting into the film companies and the BBC to tell their stories.”

McAllister described the difference employers can make by giving those from deprived backgrounds a chance: “You see the possibilities just a little bit of nothing makes,” he said, adding that “the value you get back from them as a society is massive".

Also speaking at the event was Tomorrow’s Company CEO and former HR director at Morrisons Norman Pickavance. While retail used to be a place where people could work their way up from “shop floor to top floor” this is increasingly no longer the case, he warned.

“I know some organisations are doing a lot of wonderful things like apprenticeships… but my question is how structural is this?” he said, warning that “the opportunity to even get the opportunity” is harder to come by for most people now.

“There’s a gap between where the ladder is and where people are,” he added. “It’s something for us to think about as business leaders.

“Our workplaces are full of ‘Steves’,” he urged, referring to A Northern Soul's protagonist. He called on organisations to recognise their “special gift as employers of giving people a chance”.