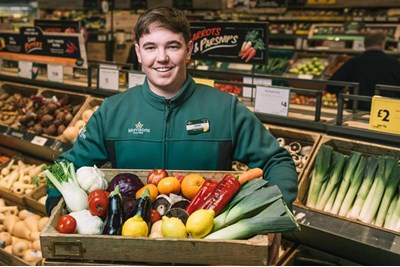 From April Morrisons will become the first UK supermarket chain to pay its staff a minimum wage of £10 per hour, up from the £9.20 minimum for up to 96,000 workers across its stores.

The decision follows negotiations with retail trade union Usdaw, and is 50p an hour above the voluntary Living Wage Foundation rate.


Sheila Flavell, chief operating officer at FDM Group told HR magazine that the supermarket’s rise in minimum wage demonstrates its dedication to being a non-discriminatory employer.

“It is great to see a large chain like Morrisons become the first UK supermarket to pay a minimum of £10 an hour,” she said.

“It shows commitment to being a fair and inclusive employer and will most likely have a positive impact on the pay gap. Retail in the UK has faced huge challenges during the COVID-19 crisis, and it has been a particularly tough time for food retail staff who have worked throughout.”

Flavell said other large supermarkets should follow suit and raise minimum wage, particularly at such a difficult time in peoples’ careers.

She said: “Essential retail workers supply communities with a vital service and deserve our support as we continue to live through the pandemic. These efforts should be rewarded by decent pay and Morrison’s have certainly been a pioneer.

“Organisations of all sizes should endeavour to offer competitive salaries to demonstrate that they value their staff. It is important that supermarket CEOs also consider workplace wellness, gender equality, whilst building a diverse and inclusive workforce.”

According to The Guardian, approximately 7,000 companies are living wage employers but as of yet no UK supermarket has been accredited by the Living Wage Foundation.

Matthew Bolton, executive director of Citizens UK, told the national newspaper that despite the economic problems caused by the pandemic over 1,000 companies had managed to find the money to become real living wage employers.

Where other companies had managed to find the money to pay staff a little extra, Bolton said it was unacceptable that no major supermarket pays all staff and contractors the living wage.

Gartner’s chief of HR research Brian Kropp, said that historically companies only increased wages because they were facing competitive pressures in order to hire employees.

However, he told HR magazine the reason for pay rises have been shifting.

“Now, more than ever, companies are increasing wages not simply to attract talent, but to build a deeper, better relationship with their employees. And this new relationship creates a different goal,” he said.