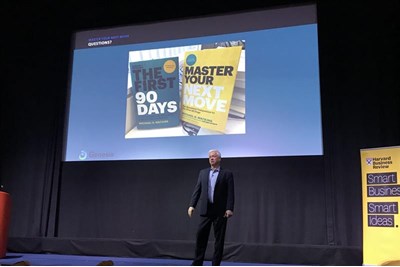 Transitioning successfully into a new role is a core leadership skill that organisations should be supporting people with, according to Michael Watkins, co-founder of leadership development consultancy Genesis Advisers and professor of leadership and organisational change at the IMD business school in Switzerland.

Speaking at a Harvard Business Review event Watkins said that “leaders go through a lot of transitions… So transitioning is a core skill for leaders these days and is worthy of a lot of attention”.

He pointed to research that shows a typical leader with 18 years’ experience has been promoted three times, moved business function twice, joined a new company 3.5 times, moved between business units in the same company twice and moved geographies twice. This totals 12.5 major transitions per leader, he explained, adding that if the same research was conducted today the figures would be even higher.

“Today we are in a world of transition – there is so much change going on,” he said.

Leaders should spend time planning for the early period in their new role because “when you come into a new job you’re under intense scrutiny”. “People make judgements on you based on very little data, so what you do early on sends a lot of signals,” he said. “The reality is you don’t even get a first chance to make a first impression, because people have called people who think they know you, so you’re coming in with a reputation.”

Confirmation bias is a particular issue, Watkins explained, as “once someone has made their mind up about something they’ll find the data to support that belief and push aside the data that doesn’t”.

And the more senior the leader the higher this scrutiny, he added: “You need to pay a lot of attention to what goes on in the first few days and weeks.”

There is a major business case for supporting leaders with transitions, Watkins explained, citing research that shows it improves productivity, increases their impact, reduces their likelihood of derailment and increases retention and engagement.

“Given the war for talent is as hot as it’s ever been it’s time to focus on this,” he said. “Well-structured and -delivered transition support halves the time required for leaders to become fully effective in their new roles.”

If transitions are unsuccessful the leader will either be “digested or expelled” by the company, he added: “A strong culture tends in a biological way to attack people who don’t fit.”

However, there are different types of transitions leaders go through and the type of transition makes a difference to how the leader should respond; a concept Watkins explores in his latest book Master Your Next Move.

Recent research found that the major reason leaders joining a new firm fail in onboarding is a poor grasp of how the organisation works, poor fit with the organisation's culture and difficulty forging alliances with peers. “None of it is to do with leadership capability,” he said.

However, onboarding isn’t only a challenge when people are joining a new company, he explained.

“Moving between units of the same company is just as hard,” he said, citing research that found it is at least 70% as hard as moving into a leadership role from outside the company. “For some organisations it will be as difficult… as you have assumptions that there will be similarities [between roles] whereas someone from outside won’t think that.”

On leading former peers Watkins spoke of the need to strike a new balance between “not being a super peer on one hand or friend on the other, and also not overplaying into grievances or issues”.

“Survivor’s guilt” also plays a part in this situation as the relationship the leader had with former peers can’t persist in the same way, which can create a sense of “loss” on both sides.

The business situation also makes a big difference to how challenging the transition is, Watkins continued, giving the example of whether a company is in need of a turnaround or a realignment.

For example, when a leader is appointed for a turnaround the urgency is built in already, he said, likening it to a “burning building”. Yet when faced with a realignment the organisation isn’t yet in a crisis so the leader needs to teach people there is a problem.

“A realignment is a storm cloud on the horizon but the storm is not yet on you, so how do you mobilise people and create the mindset that change is essential when there isn’t a burning platform for change?” he asked.

Watkins encouraged leaders to “match your strategy to the situation” as the type of transition is “very different in a turnaround versus a start-up”. He gave the analogy STARS (start-up, turnaround, accelerating growth, realignment, sustaining success) for the type of business situation leaders should diagnose and match.

Yet Watkins added that leaders will often face more than one transition challenge at a time.

“The reality is most senior leaders in new roles inherit a mix of these things,” he said. “And the more types of transition leaders experience simultaneously the higher the risk.”