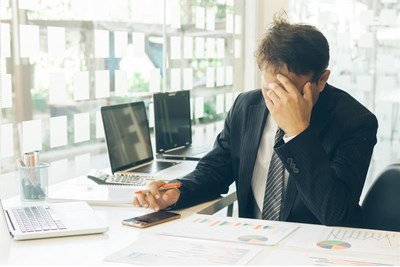 ​There is still a stigma around mental health in the workplace, with workers afraid to open up about their problems.

One in four British workers do not feel comfortable telling colleagues about their mental health issues, according to new research by software provider ADP.

“People may not feel comfortable discussing their mental health if there is a culture of distrust and this can lead to hidden problems, including sickness absence and presenteeism.

“Skilling up managers to have the right level of knowledge and confidence to have mental health conversations, and identify when someone might need support, is a vital part of breaking down the stigma.”

According to the Mental Health Foundation, 70 million workdays are lost each year in the UK due to mental health problems, costing employers approximately £2.4 billion per year.

Annabel Jones, HR director at ADP UK, said hiding mental health conditions will have a detrimental effect on both workers and businesses.

“Despite several notable attempts to tackle the taboos, there is still a long way to go to open up the conversation. Though talking about mental health remains difficult, either because people worry that it might harm their careers or due to cultural sensitivities, HR teams can play a major role in breaking down barriers so that staff feel supported to come forward.

“Raising awareness of the issue internally within organisations, putting policies in place to deal with it and signposting how employees can get help are some of the ways in which employers can show they care and that they are taking it seriously.

“A ‘top-down’ approach where leaders share their own experiences can also help to normalise conversations around mental health and encourage others to speak up.”

Workplace stress was common in the survey, with 68% of workers feeling stressed at work at least once in a week and just 8% saying they never do.

Younger generations were most likely to feel stressed. Seventy-five per cent of 16 to 24-year-olds reported feeling stressed once a week, rising to 94% of the same age bracket stressed once a month.

Stress was most common in sectors currently undergoing rapid change such as IT and telecoms, media and information.

Jones also warned HR of the impact heading back to the workplace may have on an individual.

She said: “As many employees are still working from home because of coronavirus – or working harder than ever in roles that may put them at greater risk of catching it - the mental health stakes are raised even more.

“That will be challenging, especially for large organisations where staff are working remotely or in cultures where discussing mental health is less socially acceptable. However, it’s an issue HR will have to confront, both now and when workers return to the workplace, which will create another stressful upheaval to reacclimatise to.”

MHFA has launched a My Whole Self campaign to encourage workers to bring their authentic ‘whole selves’ to work with colleagues.

ADP Research Institute surveyed 32,442 workers around the world between 29 October 2019 and 6 January 2020 for its Global Workforce View.