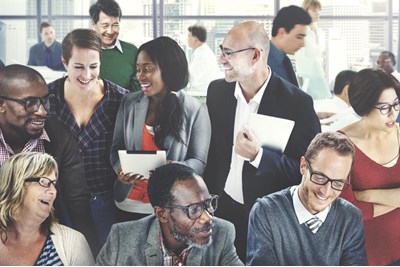 Leaders must be bold in restarting the conversation around racial diversity in UK businesses, according to speakers at the launch of a new Delivering Diversity report last week.


The research, conducted by the Chartered Management Institute (CMI) and the British Academy of Management (BAM), found that a key barrier was fear of causing offence. A third (29%) of the FTSE 100 leaders and lived experience interviewees polled said they were worried about discussing race for fear of using the wrong terminology.

“Leaders need to reboot the conversation on race,” said CMI president Mike Clasper at the launch event. “It won’t be easy and leaders will stumble. I have personal experience of trying to talk about issues in a way I thought was being part of the solution and actually offending. That’s going to happen sometimes. But silence is much worse. Offence you can solve later. I would encourage people to have the courage to keep going.”

Chuck Stephens, head of diversity and inclusion, EMEA at Google, agreed that leaders need to be brave in aiming for “progress not perfection". “No-one’s figured this out and I don’t think we will do in the short term,” he added. “I would rather you apologise for something you did or said than something you didn’t do.”

Pavita Cooper, chair of the Delivering Diversity research advisory board and former global director for talent at Lloyds Banking Group, said she’d “been overwhelmed by the response [they’d] had” to the report. “The thing I’ve been struck by is the specific issue of leaders no longer being silent on the issue of race,” she said.

Jan Gooding, global inclusion director at Aviva, said: “We need fresh light on the topic of race and ethnicity in management. Because people get fatigued by this topic so we have to regird our loins and try again. We are simply not talking about this enough."

Gooding said businesses must be brave in publishing data as a vital first step to improving equality and representation. “It’s not comfortable to disclose data you don’t feel proud of,” she said. “But all of the people in this [Delivering Diversity] report have done so because they acknowledge you have to start somewhere.”

Gooding also spoke on the challenge of intersectionality. “Even when we talk about women we’re very careless and fail to acknowledge that a black or Asian woman has a different experience to a white woman. White women are unintentionally dominating the agenda.”

Also speaking at the event was Matt Elliott, people director at Virgin Money. He said organisations’ experiences of tackling gender inequality can be transferred across to tackling racial discrimination. “We’ve taken learnings around gender and I think they do apply,” he commented.

Elliott added the importance of measuring senior leaders’ performance on promoting and championing diversity. “Senior people should be measured on it and rewarded based on that,” he said. “It should be what I’m here to do and measured on.”