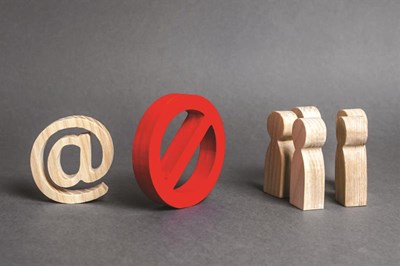 Employees react differently to receiving emails depending on their personality type, meaning a ban on sending messages at certain times (even Christmas) might be ill-advised, according to Emma Russell, senior lecturer in human resource management at the University of Sussex Business School.

Setting boundaries around emailing outside of working hours has become an increasingly hot topic.

In 2011 Volkswagen in Germany introduced a policy to freeze emails for employees working under trade union negotiated contracts. Between the hours of 6.15pm and 7am emails are rerouted.

Then in 2016 France introduced a law that obliges companies with more than 50 workers to draw up a charter of good conduct, setting out the hours when staff are not supposed to send or answer emails.

But a recent study by the University of Sussex found that banning out-of-hours emails may not be helpful to all employees.

“There is no standardised approach to email – whether that’s on how employees respond or when or if they find it useful,” Russell told HR magazine. “So I wanted to get a clearer idea of how email affects different people, and whether personality might play into this.”

The research found four different goals for email use among workers. These are: showing concern for other people, exerting control over work, meeting work goals, and maintaining wellbeing. It found that employees typically prioritise one of these goals above the others.

As such it’s difficult to introduce a policy suitable for everyone, said Russell: “A person whose concern is to appease others might agree with [a particular rule], but someone who wants more control over their work might find it stressful.”

Andrew Spells, head of wellbeing at the British Council, agreed that a ‘right to disconnect’ policy wouldn’t be practical for many organisations – including his own.

“Any measure brought out to improve wellbeing should have strategy at its core. The problem with introducing a right to disconnect is that, as the research highlights, there is not yet strong enough evidence to show that this will contribute to wellbeing overall,” he said.

“We’ve got a workforce of 10,500 employees operating across 114 countries. Regulating email use would be incredibly difficult, and our staff would probably find it challenging to feel as though they can’t respond.”

Some have found introducing tight regulations around email use effective, however. Two years ago Perq Studio decided to close the agency every Tuesday, which also meant introducing a ban on emails on this day.

“It’s just completely irresponsible and exploitative to think that emails should be answered at any time. Workers who are more conscientious and receive those emails outside of hours are going to feel the need to respond out of hours as well,” Perq Studio’s founder and strategist Laura Giffard told HR magazine.

She said that introducing the ban had enabled the organisation to re-evaluate communication as a whole: “What’s really surprised me is how much communication is actually relatively ineffective. You learn that a lot of the time we spend on email is unnecessarily drawn out. Since we introduced this all our employees have become more effective and more productive.”

Russell conceded that regardless of personality type all staff must enjoy periods of complete detachment from email to maintain good wellbeing.

“Everybody needs psychological detachment from work at some point in their day to switch off and replenish their resources,” she said.

Spells suggested this period should perhaps be during booked time off and public holidays such as Christmas: “Though questions around wellbeing and the effectiveness of certain policies are becoming increasingly complex, the logic behind holidays is quite simple. When employees are on paid leave or on holiday HR should do everything it can to encourage them to use that time for themselves.”