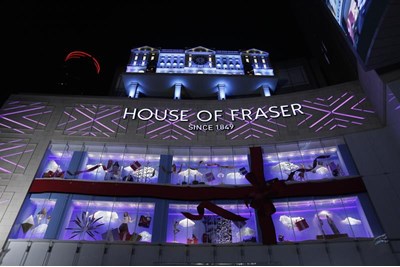 Mike Ashley’s Sports Direct has agreed to buy House of Fraser for £90 million, prompting concerns around the future treatment of workers at the department store chain

The news was announced hours after the 169-year-old brand went into administration, when talks with creditors failed.

Unions have raised concerns about the troubled company’s acquisition, in light of previous reports of Sports Direct’s poor treatment of workers.

In 2016, the Business, Innovation and Skills Committee said that Sports Direct did not treat its workers as humans. In response the company abolished use of zero-hours contracts, changed penalties on employees losing 15 minutes' pay for being just one minute late, and appointed a full-time nurse and a welfare officer at its Shirebrook depot.

But Scott Lennon, a Unite regional officer with responsibility for Sports Direct, said that the company had not made improvements to its working conditions despite the negative media attention received.

“Sports Direct is a leopard that has not changed its spots and we hope that its poor record on pay and employment practices is not transferred to House of Fraser,” he said. “Sports Direct’s record at the Shirebrook warehouse operation in the East Midlands has been dreadful. Despite the recent terrible publicity, wages remain at the minimum legally payable, and the terms and employment conditions are threadbare.”

Sports Direct had not shown interest in working with the union, he added. “The company does not want to engage in any meaningful sense with Unite at Shirebrook and this obviously sparks concern at the fate that awaits the House of Fraser staff under the new ownership," he said.

“We fear for jobs and employment conditions at House of Fraser going forward. The staff are entering a period of great uncertainty and worry. Ministers need to wake up to what is happening to hard-working employees who have minimal employment protections in 2018 Britain.”

House of Fraser currently employs 17,000 people directly and through contractors. Before the deal was announced 6,000 jobs were due to be lost.

Dave Gill, national officer at shop workers' union Usdaw, welcomed the news that jobs have been saved through the deal. But he stressed that House of Fraser staff should be listened to and treated with respect.

“House of Fraser staff have been largely frozen out of the discussions about the future business so far and they were horrified to see the company fall into administration this morning. So we welcome a buyer for the whole business being found so quickly, which offers the best opportunity to save jobs. To be successful the new owners must listen to the staff and engage them fully in turning this company around,” he said.

“It is crucial that staff are treated with dignity and fairness through the transfer process and that is best done by the new owner recognising Usdaw as the trade union for House of Fraser staff. We are seeking urgent talks with Sports Direct. In the meantime we are providing our members with the support, advice and representation they require at this very difficult time.”

Sports Direct CEO Mike Ashley said that his chain would do its best to preserve House of Fraser stores.

“This is a massive step forward and further enhances our strategy of elevation across the group. This will benefit both House of Fraser and Flannels in the luxury sector," he said in a statement. "We will do our best to keep as many stores open as possible. It is vital that we restore the right level of ongoing relationships with the luxury brands. Our deal was conservative, consistent and simple. My ambition is to transform House of Fraser into the Harrods of the high street.”

Norman Pickavance, CEO of think tank Tomorrow’s Company and co-founder of the Centre for Organisational Renewal, encouraged other businesses to review their models in light of House of Fraser being far from the only recent high street casualty

“Other sectors should take note of the speed at which high street stores have been decimated, as changes in consumer behaviour with the rise of artificial intelligence (AI) and online shopping take hold. From a leadership perspective, businesses should be looking at the effectiveness of their current models, and calling them into review in the light of changing technology,” Pickavance told HR magazine.

He added that the contribution high street shops play in communities and the economy should not be underestimated.

“An estimated three million jobs will be lost in the retail sector. If the British high street is going to survive it needs to fundamentally reinvent itself, and offer a genuinely entertaining, interesting experience for consumers. Despite the rise in AI, online shopping and self-checkouts can be isolating for customers. This is not just an economic issue. High street shops like House of Fraser have an important role to play in our communities, and in tackling isolation, through offering contact and a space where people can meet.”

Sports Direct already held an 11% stake in House of Fraser, which had intended to close 31 shops under a now-abandoned restructuring plan.

Accountants EY said the department store chain had been in a “race against time to secure funding” since Chinese conglomerate C.banner pulled out of a rescue deal earlier this month.