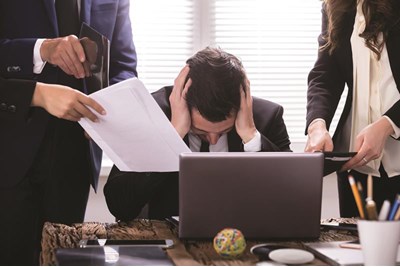 On 20 March Theresa May said she sympathised with the public’s frustration at the lack of Brexit progress. The day after writing to European Council president Donald Tusk to request an extension of the deadline for withdrawal, she said: “Of this I am absolutely sure. You, the public, have had enough.”

You’d be hard-pushed to find anyone who disagrees. Both the most fervent Leavers and Remainers are at their wits’ end after three long years, and now an extension until the end of October. The nation is collectively exhausted from simply observing Brexit.

So spare a thought for the civil servants and departmental government workers tasked with facilitating the UK’s departure.

Reports from within Westminster and Whitehall paint a picture of a workforce close to breaking point. In April it emerged that the Department for Environment, Food and Rural Affairs (Defra) employed a company to provide mental health support to staff to ease the stress of preparing for a no-deal Brexit. Conservative MP Robert Halfon described the House of Commons as “having a collective breakdown – a cross between Lord of the Flies and One Flew over the Cuckoo’s Nest”.

So how did we reach this point? And what can leaders do to mitigate the pressures?

Although it can be hard to remember that there were significant political stories before Brexit, like any major event it was not born in a vacuum. In the years leading up to 2016, austerity was the most talked-about policy in British politics. As a senior civil servant who has been right at the Brexit coalface told HR magazine, this has made dealing with Brexit even more difficult – and also meant morale was low even before the process began.

“Since austerity came in in 2010, lots of people have not had a pay rise and lots of teams have reduced in size; some pensions have gone, and things like privilege days have been taken away,” says the civil servant, who asked not to be named.

“As a service we were smaller, we’d lost a lot of good people and we were more demoralised. The hiring freeze meant that there were pockets within the hierarchy with big problems.”

A Freedom of Information request in 2017 evidences the strain Brexit has added to the mix. It revealed that the number of calls made to parliament’s employee assistance programme doubled from 108 in 2015 to 240 in 2016. In 2017 the number was 2,038 between January and October.

One of the most troubling reports coming out of Westminster recently suggests Brexit pressure may have contributed to a heightening culture of bullying and harassment. Laura Cox’s independent inquiry into the House of Commons released in October 2018 revealed almost daily examples of ministers shouting at or belittling staff; swearing at them face to face or over the phone; being ‘routinely unpleasant, overbearing or confrontational’; and treating staff ‘like servants’.

Cary Cooper, 50th anniversary professor of organisational psychology and health at Manchester Business School and government advisor, told HR magazine this kind of behaviour in departments so squeezed by Brexit comes as no surprise.

“It’s a pressure cooker,” he says. “Especially for the politicians. A lot of them are so frustrated, and they’re going to take that out on the civil servants. Those relationships, between ministers and their private personal secretaries especially must be strained. In that kind of scenario, where everybody’s tense, it can definitely lead to a bullying culture.”

The main source of frustration is a long-term lack of progress, both on Brexit itself but also on the numerous projects that have been shelved to free up resource.

“I go to meetings in government and it’s incredibly sad; nothing’s getting done,” Cooper reports. “Imagine you’re working in the Department of Health and Social Care and you want to do your best. Suddenly you get this additional work dumped on you. It means you can’t do your other work properly, you’re working double shifts, you’re overloaded.

“And a lot of it, like no-deal planning, might well be wasted work. I’m not saying people are necessarily having breakdowns, but job satisfaction is very low.”

But there is another side to the story – one that government chief people officer Rupert McNeil, who is responsible for the civil service and the wider HR function across government, is keen to present. He maintains that the “incredible agility” of the civil service means it is well placed to take the blows and remain functioning. He adds that action is being taken to plug gaps in resource.

“Within the past two months we’ve been able to move 1,500 people between government departments so that everyone is in the best place to meet the challenges we face,” he says. “In addition to this, the civil service is set up to serve the government of the day so it’s always had to be adaptable.”

Addressing the sometimes fractious relationships between ministers and their private personal secretaries, McNeil (whose previous roles include at Lloyds Banking Group and Aviva) says that these can be more functional than analogous ones in the private sector.

“The relationship that it most closely mirrors in the corporate world is that between a chairman and a chief executive,” he says. “And the private personal secretary I believe has more autonomy than the chief executive, partly because of the high level of expertise in this position. At the civil service we talk a lot about speaking truth to power, and one of the key things we say is you should be more afraid of your code of ethics than of your profession. We work on the basis of instilling a culture that is about second chances, empathy and respect.”

Longer term there is apparently ongoing work to ensure Brexit pressure is mitigated by good leadership. Simon Ancona is the chief executive of the Whitehall & Industry Group (WIG), a non-profit membership body that fosters collaboration between government, industry and the not-for-profit sector. He says “there is a huge amount of support” from WIG’s cross-sector membership for those in government bearing the brunt of Brexit.

Ancona believes that, whether in the private or public sector, leaders who understand the pressures they’re facing can make a huge difference to both their own wellbeing and that of their teams.

“In any good leadership programme the two things that will be at the fore are having a sense of a broader perspective and an element of ‘knowing thyself’,” he says.

“In a situation like Brexit, we know that the leaders who must put systems in place to improve the resilience of the workforce are often the people under the most pressure. No-one can be expected to detect signs of severe stress elsewhere unless they recognise it in themselves.”

He adds: “Leadership programmes that utilise knowledge from all sectors are very important… We see every day the results that we can achieve when leaders get together and share their experiences with others”.

But it’s clear there is plenty left to do to get Brexit over the line, and the civil service will be doing most of the heavy lifting. The hope is that with optimised working practices, strong leadership and support from sister sectors, the final toll will be lower than many currently fear.