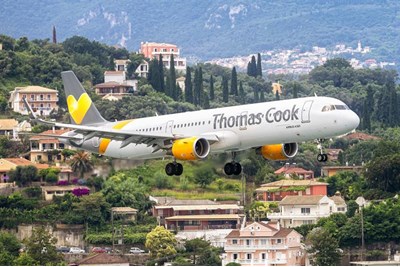 Courts will have to consider if the firm followed best practice given the short time window, legal experts say, as employees launch legal action over losing their jobs

Around 1,000 former Thomas Cook employees have signed up to take legal action under the Protective Award, which was co-ordinated by Unite at an event in Manchester on Friday (27 September).

More unionised ex-workers are expected to sign up next week at events around the travel group's other UK hubs.

The firm's liquidators said they will co-operate with any tribunal process. The Unite-represented employees join around 100 non-union staff who also said they are taking legal action.

Both groups argued that the airline and tour company acted unlawfully by not offering a Protective Award, a form of compensation given to staff at larger companies who are made redundant without being properly informed or consulted. Employees qualify for a Protective Award if they are made redundant from a workplace of more than 20 people without being properly informed – and are entitled to up to 90 days' pay.

Law firm Simpson Millar is leading the legal action against Thomas Cook and said Protective Awards in this instance could total up to £4,200 (minus taxes) per person.

The firm gave the example of one ex-employee who found out she had lost her job from a generic email at 1am the Monday morning the firm collapsed (23 September). In other cases former Thomas Cook workers did not even receive the email and instead learnt of their fate via news outlets, Simpson Millar said.


Like the Unite-affiliated staff, the non-unionised Thomas Cook employees believe the firm acted unlawfully in the way they were dismissed and have appointed lawyers to seek redress through an employment tribunal.

Unite was meeting with former staff in Manchester to also inform members of their rights, how to begin redundancy claims with the government, and to advise laid-off workers on job opportunities and updating their CV. The union said it is calling on other airlines currently recruiting staff to fast-track job applications from former Thomas Cook workers.

Commenting on the news, employment partner at BDB Pitmans Brian Gegg said that the tribunal will weigh up whether the organisation had been obliged to act quickly and was left with no choice but to inform employees about job losses in the way it did. “The claims being brought by Thomas Cook employees will turn on a balancing act of weighing strict employment rights against the need for employers to act quickly in emergency situations," he said.

"These things tend to be fact-specific in practice, so a proper analysis would need to be carried out to identify the steps Thomas Cook took as an employer in the time window that presented itself.”

Cases involving redundancy payments are complex and the courts may not rule in favour of the employees added James Froud, partner and head of employment at McCarthy Denning. "When attempts to rescue the travel company failed it had no option but to call in the insolvency practitioners. This was 'game over' for the company. News that Thomas Cook employees are planning legal action after losing their jobs may have buoyed some – but sadly the news is not particularly good for them," he said.

He added: "The legal position for employees in the context of their employer becoming insolvent is complex. While they may have rights to claim unfair dismissal, to seek redundancy compensation and a Protective Award for a failure by the employer to consult with them prior to the dismissal, the value of those claims is restricted – and the way these claims are treated is not generally that favourable.”


David Fisher, partner at CM Murray, said he believed that there is a good chance the courts could rule in favour of staff, however: “The requirement for proper consultation about potential redundancies with trade unions and other employee representatives is very strict, and this could be very costly for Thomas Cook. There is a limited defence if ‘special circumstances’ prevent the employer from complying fully with its obligations, but it’s unlikely to apply where an insolvency has been building over time rather than arising from a sudden disaster.”

The news of the legal action being launched by former staff was followed over the weekend by Thomas Cook's boss Peter Fankhauser defending the £8.3 million he has been paid since November 2014, and denying he was a "fat cat".

He told The Mail on Sunday that around half his remuneration (some £4 million) came in the form of share payments, which are now worthless as he did not cash them in before Thomas Cook went into liquidation. He stated his pay was not "outrageous" compared with other bosses in the FTSE 250 index (which Thomas Cook exited last December), and said packages had been set by the firm's remuneration committee and approved by shareholders.


His comments followed top directors' combined £20 million in salaries and bonuses since 2014 attracting criticism from staff, unions and politicians. Business, energy and industrial strategy secretary Andrea Leadsom has asked the official receiver overseeing the liquidation to look at whether bosses' actions "caused detriment to creditors or to the pension schemes".

Rachel Reeves, chair of the Business, Energy and Industrial Strategy Committee, said there are questions to be asked about Thomas Cook's "accounting practices", with suggestions that they improved the chances of executives being paid large bonuses.