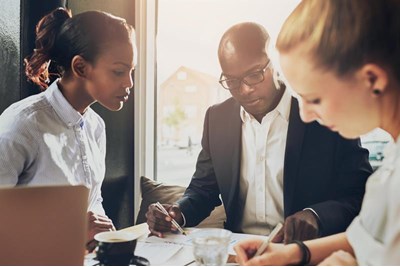 Companies need to start talking to their employees more openly about race and not shy away from it, say Maggie Semple and Pamela Jones, speaking at the latest London HR Connection webinar.

Semple, co-founder at consultancy businesses I-Cubed Group and The Experience Corps, asked HR professionals what was on their minds, and diversity and inclusion stood out.

“The rise of social consciousness has accelerated under current global circumstances,” said Jones COO at the charity Best Beginnings and the co-founder and executive director at Genesis Consultancy.

Jones and Semple discussed social consciousness and how it has changed the relevance of the term ‘BAME’ in today’s society.

“You’ve used ‘black and brown’ when describing racially diverse employees,” said Semple to Jones. “Why did you use that?”

Jones said that when speaking about identities it is important that we don’t homogenise everybody together.

While Jones said it’s all about language and ‘getting it right’, she acknowledged that it can be scary for people who don’t want to engage in the language of race.

Semple said she had worked with companies who are not afraid to say that “lumping everyone together under BAME is no longer a good way to report about how D&I is progressing.”

“BAME is becoming a term that more and more organisations are beginning to question whether it should be used anymore,” she explained.

Semple used herself as an example and said: “As a black person, no one asked me permission to make the phrase BAME up, I was just suddenly in it.

“I think that the rise of social consciousness means building communities that any organisation today, if it’s going to create something new say a phrase about a people, can consult and talk to the people it’s trying to reframe.”

Jones added: "Social movements like Extinction Rebellion and Black Lives Matter, do not cease to exist in the workplace. People want to start conversations and make change at their places of work."

Jones said that racial silence is still rife within many companies. “People who are so afraid to speak about race and different identities, what are organisations doing to push those employees forward? We know that historically D&I has been woefully failing and that organisations have been reluctant to change their processes and systems.”

She pointed out that the reaction to the death of George Floyd differed greatly from company to company: “Some published racial injustice statements, and some were woefully silent. For the employees of those companies, that was hurtful and that hurt continues.

“It was also noticeable that for those companies who didn’t pen a racial injustice statement, some were asking their black and brown employees to do it for them, and we need to talk about this.”

Jones added that a CEO or head of communication that cannot put together their own injustice statement shows that there is still a lot to be learned about D&I.

Luke Mayhew, non-executive director of InterContinental Hotels, agreed with Jones and said: “If organisations stay silent on matters such as Black Lives Matter, then they are being complicit to the actions of others.”