The most demotivating business behaviours 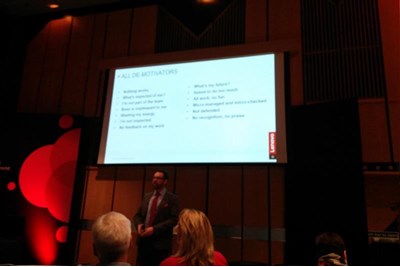 Ave gone through difficult times at work and after reading this article ave realised that i was demotivated from the onset . Its an eye opener for me being at the management level on how to handle ...

Lenovo's head of talent development, Maxim Strashun on what not to do around employee engagement

People are usually capable of motivating themselves but managers can stand in their way, according to Maxim Strashun, head of talent development for Lenovo.

Speaking at the HR Directors Business Summit, Strashun outlined the key ways in which leaders can disrupt their employees' motivation, and what they can do to fix it.

Not being ready for their arrival

One way to demotivate someone on their very first day is not to have a place for them, explained Strashun. "No computer, no password, no idea where the toilet is, nobody inviting them out for lunch," he said. "Right away they feel demotivated."

The fix: "If you know when they are starting praise or bribe IT into making sure everything is set up for them," suggested Strashun. "Ask another team member to look out for them, and you can get rid of this demotivator."

"They've been in your company for a couple of weeks but there is one problem," said Strashun. "They still don't know what you expect of them. Managers might think everyone is clear on what their KPIs are, but if the employees don't know then they feel demotivated."

The fix: "This has a simple solution," he said. "Ask them what they think their role is. Ask them how their KPIs should be measured. Just talk about it a little bit; it isn't rocket science."

Not feeling part of the team

"A staff member may come to their manager and say that they don't feel like a part of the team," explained Strashun. "The manager might say 'give it some time, you've only been here six months', or worse, they might say 'actually I think the problem is you'. Your employee came to you for help, but got a smack."

The fix: This is not the employee's fault but the manager's, according to Strashun. "If someone says they don't fit in then I have failed as a manager," he said, and suggested that trying some team building exercises should help. "You could try breakfasts, pot lucks, or going out for a drink."

Taking stress out on people

Strashun discussed a case where a manager was generally an easy person to be around, but on difficult days would take out his stress on colleagues, creating a miserable working environment. "When he found out he was shocked, and wanted to know how he could make it better," he said.

The fix: "His employees suggested that when he was having a bad day and was likely to take it out on other people he should go in his office and close the door!"

"Imagine your manager tells you that you have to get a report in by five, so you cancel everything to finish it," Strashun said. "The next day when you ask how the report was he says 'oh, I don't need that until later, I'll let you know'." He explained this was related to feeling disrespected by the employer, as they are not valuing their peoples' time.

The fix: Strashun suggested openness could help. "If you know a specific deadline just be honest," he said.

No plan for the future

Strashun warned that while it may be easy for leaders to envisage the futures of their people, for the workers it can be much harder. "The manager can see the paths, but often staff can't," he said. "You might know where others in that role have gone, but the employee does not."

The fix: "It's easy to sit down and say 'look at these potential paths. Which ones interest you?'" he added. "You could arrange a coffee for your employee with someone who has already gone down that path, and it would be immensely valuable for that individual."

"The top way to demotivate senior leaders is to ask them to do too much," Strashun stated. "In my coaching sessions this is the thing people talk about the most."

The fix: "At the start of every meeting a manager should say 'talk me through what you're working on,'" he said. "They may not have realised every project the person is working on."

All work, no fun

Strashun said that while the definition of 'fun' at work differs between cultures, there has got to be some. A workplace with no fun activities on the calendar can become demotivated.

The fix: "Fun is easy to organise," he said. "All you have to do as a manager is make sure someone is organising it."

"Imagine you always present a report written by one of your employees, and one month when you are on holiday that person has to present it in your place," Strashun explained. "They get really good feedback on that. Then when you are back you demand to check over their next report."

The fix: "Employees say 'stop controlling us! You know we can do a good job!'" he added.

Strashun described a meeting where one staff member's work was being attacked by their colleagues as they were being asked difficult questions. "When HR stepped in and asked why the manager didn't stop it he said that the company had a 'sink or swim' attitude," he explained. "That doesn't work in most cases."

The fix: "Tell your people they can talk to you if they screw up," Strashun said. "Outside of the team defend them, and work through problems within the team."

Feedback is extremely important to employees, and the power of positive feedback should not be underestimated. "People would rather only get feedback on what they get wrong than no feedback at all," Strashun said.

The fix: "If they do a good job they want to hear from you," he said. "When there's no praise or recognition then they're demotivated."

Ave gone through difficult times at work and after reading this article ave realised that i was demotivated from the onset . Its an eye opener for me being at the management level on how to handle staff.