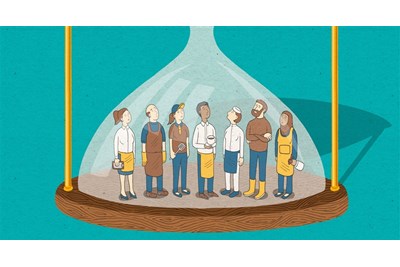 In the words of Rhys Moore, director of the Living Wage Foundation: “People who work hard shouldn’t have to struggle to afford the essentials in life.” Is paying the living wage the answer, and can all businesses manage to do so?

The living wage is currently set at £7.85 an hour (£9.15 an hour in London). According to services provider company ISS CEO Richard Sykes, businesses need to “front up” to the living wage issue. “At a personal level, I see [paying the living wage] as being morally and ethically the right thing to do,” he says. “The benefits from doing so are wide-ranging. Our people are more engaged, and this leads to more people who stay for longer, and who are more aware of the holistic impact of their work.”

KPMG’s Mike Kelly, chair of the Living Wage Foundation, adds that when it comes to paying a living wage, in a perhaps unexpected twist, larger companies are lagging behind smaller ones, with only 19 of the FTSE 100 accredited living wage employers. He believes there are several reasons why larger employers aren’t paying more.

“Some are ‘unconsciously incompetent’ and don’t know about it or haven’t considered it,” he says. “There’s also a myth that you have to do this overnight, which is a misconception. Finally, some industries have razor-thin margins and business models based on the minimum wage. There is a discussion to be had about business models.”

For outsourcing companies, there’s also the issue that some clients are not interested. As Mitie CEO Ruby McGregor-Smith argued at the 2014 CBI Annual Conference: “It’s all about price [when bidding for contracts]. There’s no interest in corporate responsibility or how much people get paid.”

The Living Wage Foundation’s recent supplier provider recognition scheme, which asks suppliers to commit to submitting two bids – living wage and minimum wage – to potential clients, goes some way towards addressing this issue. Sykes says that with the facilities management industry employing millions of lower-paid workers, “our industry is well-positioned to make a positive impact on the living wage growth”.

Then there’s the fact that pay has to link to productivity, as CBI director for employment and skills Neil Carberry says: “The money has to be in the bank before you can pay more, and productivity is in the doldrums.” However, Kelly argues that “you can pay more at the start and get the increased productivity that covers the additional cost”.

What has also progressed recently is the evolution of the pay and living standards issue away from a purely moral or ethical issue, to one of central business importance. “It used to be a question of ‘are we going to ride on the backs of other people’,” says Kelly. “Now, it’s more around productivity levels and competitiveness.”