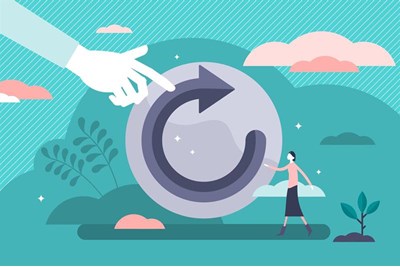 ​With many employees now working from home due to the coronavirus crisis, most businesses have had this unwelcome change thrust upon them.

As a result, there has never been a greater need for clear communication and fast action – and for employees to take messages on board. Companies that can implement change effectively will be more likely to survive the current climate.

If you’re looking to boost buy-in, an understanding of human behaviour can help you.


One particularly well-established influence on readiness to change is timing. A plea to change behaviour can have very different outcomes depending on when it is heard.

There’s good evidence to suggest that timing is critical. It makes intuitive sense. We often even subconsciously make the decision to implement change at the start of new time periods – for example, setting goals ‘starting on Monday’.

But the evidence is more than anecdotal. Wharton School researchers Hengchen Dai and Katherine Milkman, and Jason Riis at Harvard Business School, have carried out a series of studies to explore and quantify what they term the ‘fresh start effect.’

They have investigated various ‘starting points’ to find out whether people are more motivated to carry out behaviours that help them achieve their goals at these times.

In one study, they analysed gym attendance data from 11,912 students. Results showed that the probability of visiting the gym increases at the beginning of the week (by 33%), month (by 14%), term (by 47%) and year (by 12%). Birthdays also increased gym attendance by 7.5% compared to regular days.

The psychologists validated their findings by looking at corroborating data sources. Using Google Insights for Search, they found that searches for key terms, like ‘diet’, spiked at the beginning of new time periods, respectively rising:

To put these numbers in perspective, diet searches only went up 4% on the day that the New York Times announced the results of successful clinical trials for a new diet pill.

The business implications are clear. If you want people to adopt a new behaviour, time your programme to start at the beginning of a new time period. If you do, you’ll be working with human nature rather than against it.

You might be wondering why people are more open to changing behaviour at the beginning of new time periods. Dai, Milkman and Riis hypothesised that people are resistant to change because of a deep-seated desire for consistency with their past selves.

Our culture has a lot of negative terms for people who are inconsistent, and people want to avoid the opprobrium of their peers.

Because of this need for consistency, temporal landmarks become important. When we enter a new time period, the psychologists argue, we create a small bit of distance from our imperfect past selves. This weakens the hold of consistency and makes it more likely we’ll adopt new behaviours.

The discovery is intriguing and begs the question – could more significant personal landmarks have an even bigger effect?

To test the hypothesis, I recruited 2,370 nationally representative participants. They were asked to answer two questions. First, to list the life events they had undergone in the past 12 months.

They were prompted with a list of six life events, such as starting a new job or university, getting married or divorced or retiring. Second, they were asked to state for eight categories whether they had tried any new brands in the past year. The categories included lager, coffee shop, make-up, broadband and cars among others.

Of course, you need to be careful making changes to your approach based on a single study. But the evidence is broader than that. I ran another questionnaire with a few modifications.

Once again, in every category people were more likely to have tried new brands if they had undergone a life event.

For all product categories bar one, the probability of trying new brands increased by at least 75% after a life event. And in over half the categories, the trialling of new brands doubled.

It would seem then that any landmark change in circumstances will trigger change in other areas. But that doesn’t mean that all life changes are equally influential. I found that the impact of a life event varied by category.

Consider make-up. The most important life events for this category are when a consumer changes their social group – when they start a job, begin university or get divorced.

In these circumstances, when people might need a confidence boost, they were even more likely to switch brands.

What can you do? Well, the literal interpretation of the data is to time your behaviour change programmes for new beginnings – Monday, the first day of the month, the first day back from a bank holiday.

Many consumer brands already do this – it’s not a coincidence that Spotify sends out their new Discover Weekly playlist on a Monday.

The categories and life events I have explored might not be spot-on for your brand. If that’s the case, why not repeat my study in your category? It only requires adding two questions to an existing survey. The cost is minimal, but the results will be valuable.

If you’re able to tailor the programme further, communicate when people are personally receptive to new ideas because they’re already undergoing shift. New starters, new roles within the organisation – all of these are opportunities to get your message both heard and acted upon.

Perhaps the biggest opportunity of all at the moment is the return from social distancing. This is a significant piece of environmental destabilisation that has affected the entire country. When people return to the office, it’ll be an opportunity to forge new behaviour patterns in a way that you want.

But what about a more lateral approach? The breakages with one’s past self can be symbolic. In her landmark research paper on the fresh start effect, Milkman gives the example of the Catholic confessional. This is an effective psychological intervention as it breaks the confessor’s link with their past self, wiping the slate clean and enabling a fresh start.

So, consider how you can create symbols of change, whether that’s a reshuffle of the seating plan or something more dramatic.

One of the theories of human behaviour that we’ve touched on is that people want to be consistent with their past behaviour. In one respect, this is a barrier to change: the fact of requesting a change means demanding a degree of inconsistency.

But it’s also a phenomenon you can harness. Re-frame the changes you want as being consistent with employees’ current habits or values. If you want to encourage staff to adopt a new process, don’t emphasise its superficial novelty. Instead, position its underlying purpose as being a continuation of your initial reasons for adopting the original system.

For example, if you introduce new expenses software, stress that you chose the original system because, say, its accuracy and comprehensiveness were
in line with your company needs and that this new
offering better delivers against those values.

Behavioural science: relevant for all

The fresh start effect is just one relevant bias with practical HR implications that has been discovered by psychologists.

However, psychological research stretches all the way back to the 1890s and in that time tens of thousands of experiments have been conducted. That means that whatever problem you’re facing, whatever sector you work in, there are insights from psychology that can help you solve your challenge. It’s just a matter of unearthing them.

This piece originally appeared in the May/June 2020 print issue. Subscribe today to have all our latest articles delivered right to your desk