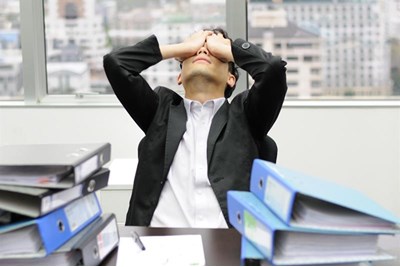 Research has found employees are experiencing high levels of stress at work, leading to disengagement

High levels of stress at work could be having a negative impact on engagement, according to research from Robert Half UK.

The It’s time we all work happy report found that nearly two-thirds (63%) of UK employees surveyed said they experience stress in their jobs.

The report cites data from Towers Watson’s Global Benefits Attitudes survey, which found that of the employees who claimed to be experiencing high stress levels more than half (57%) reported being disengaged.

Phil Sheridan, senior managing director of Robert Half UK, explained that happiness at work and health, including mental health, are closely linked. “Starting a wellbeing programme may come at a cost but health and happiness go hand-in-hand,” he said. “Creating a working environment that encourages good health fosters a more stable workforce. It also helps facilitate better team relationships, which in turn drives employee satisfaction, performance and morale.

“It’s important to remember that employees are an organisation’s most important asset. Companies that promote and protect workers’ health are building a culture dedicated to the overall wellbeing and happiness of employees. These businesses are likely to see higher levels of staff engagement and productivity, helping them become more successful and competitive in the long term.”

Separate research from Personal Group has found that 48% of UK employees are not happy at work and that this could be seriously affecting productivity, with happy workers 12% more productive.

The Business of Engagement: Improving Productivity through People report found lower job satisfaction among frontline workers. Only 30% of frontline employees never feel enthusiastic about work. This compared with 70% of directors and 76% of the self-employed.

Mark Scanlon, chief executive of Personal Group, said that such low rates of happiness among more junior workers could explain the UK's historic productivity problem: “It’s no surprise that there are variations in engagement and happiness between those in different roles: directors and senior managers tend to be much more positive than more junior team members," he said. "Efforts to increase engagement should therefore focus on the latter groups. Many of these people tend to be frontline workers; these workers are the engine room of the UK economy. When we’ve gone out and spoken to these workers they tend to feel disenfranchised, demotivated and neglected.”

Scanlon pointed to the report's finding that only 52% of respondents said they were working as efficiently as possible. He suggested that boosting employee satisfaction would improve this rate: “There is growing evidence of the connection that happy and engaged employees are more productive. This could explain why those who are self-employed seem to be happiest and why the UK entrepreneurial and start-up scene is so successful – these people unsurprisingly tend to feel more invested in the business outcome.”

The research also found that 5% of employees would be happier if they received more recognition in the workplace, with long hours a top complaint when asked what would make them happier.