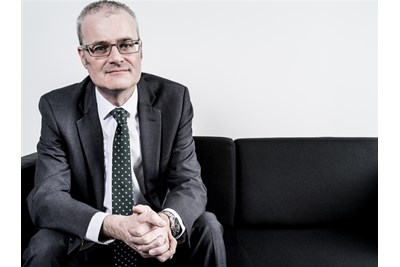 The NHS is our largest employer and faces unprecedented challenges. We meet the HR chief tackling these workforce issues

What makes you proud to be British? If you’re anything like the 52% of respondents in a 2014 poll, it’s the NHS. That’s the highest score of any British institution, beating the armed forces, the Royal Family, team GB and the BBC. And despite the scandals and set-backs, it’s seven percentage points higher than in 2012.

That pride for our somewhat battered NHS is something Danny Mortimer, chief executive of NHS Employers, feels fiercely. He has worked in the service since joining as a porter aged 18, working his way up to managerial HR roles.

Having been in the NHS for “well over 20 years”, its issues aren’t new to him, “but this opportunity to influence and make a difference across the entire sector is a singular one”. It’s fair to say the scale of the challenge is huge, with the NHS having to find savings of £20 to £30 billion over the next decade, while battling skills shortages, cultural problems, industrial action and changing models of care, to name but a few concerns. And for Mortimer, there’s another more personal aspect to the task ahead: carving out his own legacy in the light of his predecessor Dean Royles, who dominated the HR Most Influential practitioner ranking for three years.

“There are several areas of priority for me,” Mortimer begins. “First: changes in the way we work. As the boundaries between [medical] and social care blur, people will need to work very differently. There’s also the issue of 24/7 care; colleagues will have to provide that and we have to maintain flexibility and reward people.”

The third area is a skills shortage, which is forcing trusts to employ more people from overseas. Research found one in four nurses had to be recruited from abroad last year, while separate figures suggest the NHS hired about 3,000 foreign-trained doctors in 2014 to plug gaps. “We haven’t been able to keep pace with demands,” admits Mortimer. “We need a greater diversity of entry routes and have to recruit internationally.”

While immigration is often used as a political football, particularly in the run-up to an election, Mortimer feels the NHS is exempt, pointing out that “there has always been an international dimension to our workforce” and that “healthcare is an international industry”.

As to why the NHS is facing such severe skills shortages, he says demographic changes (such as our ageing population) are driving demand. “We didn’t properly anticipate that demographic change in dependency,” he concedes. Now the focus is on training more frontline staff, but given the nature of training (it takes three to four years to train a nurse and 14 to 15 to train a senior doctor), it will take a while for the NHS to feel the benefit of increased admissions.

The service is also under pressure to reduce dependency on expensive temporary and agency labour, something Mortimer agrees with: “We have always needed flexible labour to deal with peaks and troughs but the real solution is to permanently employ people.”

With funding, or more accurately a lack thereof, at the heart of NHS workforce issues, it’s no surprise that making HR more efficient is front of mind. He sees tackling absence as a critical way to drive efficiency, supported by good management practice: “We know things like consistent policy, investment in physiotherapy, peer-to-peer support and employee assistance programmes make a difference.”

He cites work by Lancaster University Management School professor Michael West that has “consistently shown the correlation between management practice, staff engagement and patient experience”. But with the workforce under immense pressure to deliver, isn’t burnout a risk? A recent Unison survey found 82% of ambulance workers have considered leaving the service due to stress.

“I see staff working enormously hard to maintain levels of service and care; they feel that pressure everyday,” Mortimer acknowledges. “Part of our contribution as workforce professionals is to help that process both of managing the pressure and finding ways of working smarter and better.”

Separate Unison research revealed that two-thirds of staff would consider leaving the NHS because of pay, pressure and unpaid overtime. How would he reconcile such a finding? “Our staff survey tells us some staff do feel under pressure to work extra hours. I accept people are working flat out. But it’s also simplistic to say employers aren’t remunerating people for the hours that they do or recognising them for the work they do.”

He adds that Unison’s findings “don’t quite tally” with the NHS staff survey, which recorded a staff engagement score of 3.6 and a motivation score of 3.82 (both out of five). “I’m not pretending they are not under pressure and that there aren’t concerns, but I don’t think most employers would recognise what Unison’s survey illustrated. And I don’t think most employees would.”

The relationship between employers and unions has been more strained in the NHS lately, with several instances of industrial action. The main focus of union anger is pay restraint, something Mortimer says has “become totemic for the pressure people feel under”. While he says pay restraint can’t be maintained indefinitely, he calls it an “affordability challenge”.

Other areas of disagreement include pay for performance for doctors, contracts, and ways of working – specifically changes to contracts that enable service delivery across the full week. “We need consistent presence at weekends,” says Mortimer. “Lots of colleagues accept that but trade unions have concerns about how it will be done.”

When HR magazine meets with Mortimer, NHS Employers had just settled a dispute with the BMA and is “gearing up” for a “bigger conversation about pay and contracts across the NHS” – “It won’t be quick or easy, but it’s necessary.” Despite the conflicts, he believes other sectors could learn a lot from the “strong ethos of partnership” inherent in the NHS’s relationship with its unions.

“There’s a genuine belief on both sides in the value of partnership,” he says. “We keep talking; we don’t leave the room. There is that honesty and desire to keep working together. It would be too simplistic to say we’re on the same side, but we do want what’s best for the NHS and the people that work for it – even if we sometimes disagree about how to achieve that end.”

Away from the tangible issue of pay and contracts, the subject of culture is both timely and somewhat painful, given the Francis report into failings at Mid Staffordshire Trust. Mortimer sees the main challenge as variation. When you have 300 organisations and a staff of more than 1.3 million, how can you ensure consistency of “staff experience”? The answer appears to be: with difficulty.

“The challenge is variation and inconsistency,” he says. “There are areas of fantastic practice and culture where employees do feel confident to raise concerns and those are taken seriously. And there are examples where people don’t feel able to raise concerns, or who are victimised when they do. In a group of organisations our size, both things can happen at the same time – even in the same organisation.” Part of the solution is to make it easier for Trusts to share good practice and to reinforce the importance of organisational development, via NHS Employers’ ‘Do OD’ network.

On the Francis report, Mortimer says: “It’s always a difficult process when someone holds a mirror up to you. But the report was fair and balanced, and it has had a catalytic effect. It has accelerated what we need to do and that is welcome. We can’t be defensive about it.” He adds that since the report, staff confidence in raising concerns has risen, with 68% saying they felt confident to do so in 2014.

“We have more work to do to move beyond what it says on a policy document,” he continues. “Where things can go wrong is where the policy is the first thing and slavishly followed. Whereas if someone has been brave enough to raise a concern, a policy can’t capture how you support and engage with them.”

Engagement more widely is another focal point for NHS Employers – not too surprising given a study from Aston University found patient mortality rates were 2.5% lower in trusts with high engagement levels. “Engagement is an outcome, not an event,” says Mortimer. “It’s how staff feel about their organisation, not a survey, not a yearly workshop.”

And he believes that despite pressures, frontline innovation is possible. “You have to do right size innovation. If a member of staff can save 30 minutes of a patient’s wait time through application of their expertise, that’s innovation. [Innovation] doesn’t have to be discovering penicillin, it can be small things that make a big difference. Organisations have to find ways to give frontline staff the time and tools to innovate. Sometimes it’s as simple as asking: What doesn’t work around here and what can we do about it? It’s part of the management role. I don’t accept there isn’t time and space to innovate.”

Despite the considerable challenges facing the NHS, Mortimer believes he is fortunate. But that there is much more to do. “I inherited an organisation that has a strong voice, but we can make it even stronger. The NHS is usually the largest employer in any community, so to be able to make that contribution to the community is a really privileged position to be in.”