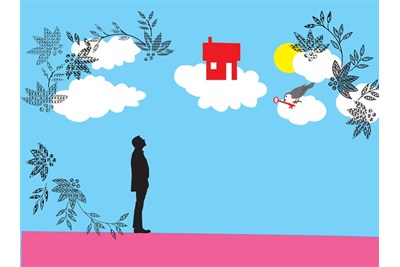 In an active job market, employee benefits are attraction and retention battlegrounds. As firms compete to offer the most innovative schemes, there's a new kid on the benefits block.

An Englishman’s home is his castle – but it’s becoming increasingly hard to own that castle, especially for younger people. With house prices soaring, it’s not surprising home ownership has fallen from 70% to 64.6% since 2005.

Should employers be stepping in? Professional services firm KPMG certainly seems to think so. It operates in a notoriously competitive sector, where attracting and retaining top talent is essential. So it was a desire to stand out as an employer of choice that led the business to look at how it could facilitate mortgages for its employees, and which ultimately led – after a tender process – to a tie-up with both the Clydesdale Bank and Yorkshire Bank.

Initially, the concept was built around attracting younger talent by showing that KPMG could help them get a foot on the property ladder, through facilitating a relationship with a provider that would be willing to factor in their future earning potential when assessing mortgages, as well as offering preferential rates.

“We have people early on in their careers who have a typical graduate salary but have huge earning potential,” says Sara Flanagan, UK head of employee benefits and wellbeing at KPMG. “So what they can borrow at that early stage isn’t necessarily a reflection of what they might be able to access later on. We wanted to help people get on the property ladder early, rather than having to wait a few years.”

However, the firm came to realise that setting preferential mortgage rates is a benefit that would be appreciated by employees of all ages. Now all employees and consultants working with the firm for at least 12 months can access a free private banking service, which includes mortgages at preferential rates, as well as free worldwide travel insurance, contact with a personal bank manager and both current accounts and ISAs.

Flanagan is keen to stress that KPMG is not involved in negotiating or setting rates. “It’s really down to the bank in terms of what those are,” she says. “It’s definitely a better deal than [employees] would get if they just walked into the Clydesdale and Yorkshire banks, but obviously it’s a competitive market so they need to look at the market themselves. Once they get to that stage they become a customer of the bank, and it’s nothing to do with KPMG.”

Both parties had to collaborate to establish how the concept would work in practice, says Flanagan. “The main thing we had to consider was all the regulatory rules, and we had to be very clear that we weren’t endorsing the bank,” she says. “We also make it obvious that we don’t receive any remuneration or fees from the bank, and we’re not giving advice.” Another concern was over what would happen with leavers, she says. But as the relationship is with the bank rather than the employer, any arrangement would run its course and only be subject to change at the end of a fixed term or when the individuals wanted to alter it.

Henry Tapper, director of financial education firm First Actuarial, says the move is reminiscent of arrangements that were common in the 1980s. “If you worked for a big employer then that firm was able to help you get a mortgage and you used to get staff rates,” he says. “Now credit is the big issue for young people. The capacity to borrow at a high loan-to-value ratio is critical.” The arrangement should work for both sides, he adds, with the bank gaining access to potential high-earners and KPMG getting a valued employee benefit without incurring much expense.

Martha How is a reward and benefits partner at Aon Employee Benefits. She also likes the concept of mortgages as a benefit, and suggests it could be used in sectors such as technology and media, which have a high proportion of younger employees. “Where it’s going to struggle is where you have a significant proportion of lower-paid and older employees,” she says.

But there are a number of potential issues. How gives the example of a business that rolled out a pensions and savings initiative but received very low take-up. “When the client scrutinised why people weren’t interested, the response was that employees saw that as very much part of their private lives,” she says. It’s possible this could generate the same response, she points out, adding that anything in the region of a 3% take-up would be “impressive”.

Darren Laverty, sales and marketing director at employee financial benefits provider Secondsight, also welcomes the idea, but has concerns over whether it could restrict the range of mortgages staff have access to. “If people want to increase the probability of getting the best deal, they need to go to a mortgage broker that is unlimited and impartial,” he says. “My only concern about this would be that employees are limited to one organisation, so while [the financial partner] may offer preferential deals from their own product range, it may not be the best on the whole market.”

Meanwhile, KPMG has been promoting the new facility to staff through its intranet and hosting roadshows run by the Clydesdale and Yorkshire banks. Flanagan won’t be drawn on figures around take-up – the initiative only launched last October and requires people to move bank accounts as well as build up a relationship with the banks. But she says initial feedback has been very positive.

“We had a lot of anecdotal comments coming back to us through our internal social media platform, and we also have data that shows how many people are looking at the offer online, and how many have applied for accounts,” Flanagan says. “We didn’t really know what to expect, but at the moment we’re happy, and the banks are happy.”