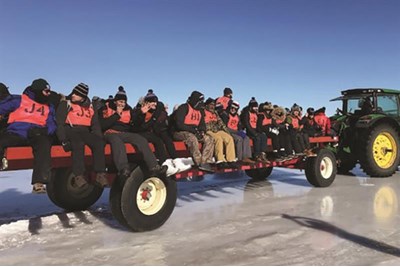 Co-created with ex-soldiers at Reticle Ventures Canada, the programmes include a 24-hour bootcamp where students must work in teams to deal with hostage and terrorist situations.

“Businesses prize many of the skills the military possesses – for example the ability to deal with adversity, work as a team, and overcome seemingly-impossible obstacles,” explains Diana Drury, director of team and executive coaching.

Students are transported to a location “in the middle of nowhere” and put into teams. Drury explains that team-based learning is key to teaching people that “there are places as a leader where you need to step up, but there are also times you need to step back and let others lead”.

Teams are taught survival skills, such as starting fires, before being put through a series of tough situations. These include blind-driving a Humvee (a four-wheel drive military vehicle), a medical extraction exercise and a real-life crisis scenario, such as a hostage situation or imminent terrorist incident where teams have to ‘save lives’.

It’s a gruelling experience, with less than two hours’ rest, rationed food and no contact with the outside world (mobile phones are confiscated). There’s also the Canadian elements to contend with, adds Drury: “The first year we did this we had the worst weather – a snow storm, freezing rain… but it carried on”. Drury believes this all prepares students for the unpredictable nature of today’s business world.

“We show them that you can’t always predict what’s coming; you have to deal with ambiguity and be resilient and deal with setbacks,” she says.