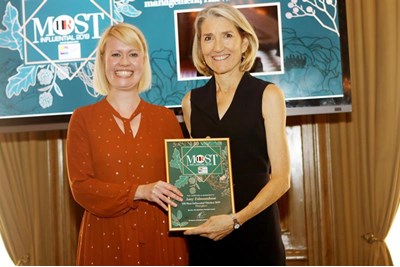 Edmondson was commended for her work which “arrives at a time when many organisations and HR professionals are engaged in seeking to make their organisations more effective, inclusive, and empowered”, according to editor of HR magazine Jenny Roper, speaking at the event.

Commenting on her work on psychological safety, which earned her the top spot, Edmondson said: "People cannot flourish in a culture of fear... I stumbled into the concept of cultures of fear. It's my oldest work, but it's taken a long time to get it right. I found a stunning result, which was that high-performing teams in healthcare didn't make less mistakes, they made more. I was able to demonstrate that maybe it's not that they really make more mistakes; it's that they are more willing and able to talk about them."

Described as a “stalwart of our thinkers list” founder of Quality and Equality Mee-Yan Cheung-Judge came in at second place. Cheung-Judge remains in the top three having also been ranked 2018’s number one most influential thinker.

When collecting her award Cheung-Judge talked on her focus of organisational development, and stressed the importance of 'self' to HR practitioners' work. “As a troubleshooter for so many organisations, yes policy is important, structure is important, but we need to think that the most important thing we can do is to enable that 'self' to blossom... When we can do that we are all on to a winning formula, so go for it,” she said.


Tomas Chamorro-Premuzic was announced as this year's third most influential thinker. He said that it's important for the HR profession to retain a critical inquisitive approach to what it does, and to regularly challenge itself: “This speaks to the right spirit and attitudes of HR magazine. Unless you want to go down the route in the US where HR had been co-opted by the self-help industry, it's good to have self-criticism, which is what Britain has always been known to do well. Cynicism and the ability to not take yourself too seriously is at the heart of this. It's an honour to accept this award."

Having topped the HRMI thinkers list in 2017 and as a stalwart of the top five over recent years, professor of organisational psychology at Queen Mary University of London Rob Briner was recognised for his outstanding contribution to the profession as he was welcomed into the HRMI Hall of Fame.

Briner was praised for his tireless work ensuring practitioners understand evidence-based HR and how to embed it day to day, with the concept now included in the CIPD’s new Profession Map, launched in November 2018.

He said: "I'm not going to leave anyone alone until the idea [of evidence-based HR] gets a bit more traction. Over the next few years I'm planning to spend a little less time in the university and more time working with practitioners... It's truly an honour, thank you."

The top 30 thinkers are as follows: