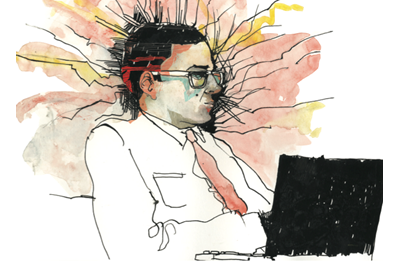 A rise in presenteeism is affecting productivity levels at work, as nearly two in three employees have attended work while feeling ill in 2013.

According to the research from business psychology company Robertson Cooper, productivity levels for employees who feel ill drops from 75% on 'normal days' to 55% on 'sick days'.

Professor Cary Cooper, professor of organisational psychology and health at Lancaster University and founder of Robertson Cooper, said: "Our data shows people are experiencing new levels and sources of stress at work and this has lead to a culture whereby certain individuals are too afraid to be off sick.

"It's a vicious circle that leads to presenteeism, rather than absenteeism, and lower productivity. Crucially, this lower productivity fuels the new top source of stress, which is not having enough time to complete their job. On any given day, there could be hundreds of thousands of people at work who are there in body, but not in spirit."

Cooper added: "UK industry is already lagging behind Europe by up to 20% in terms of productivity per head. These figures show that unless we take workplace stress seriously and manage its effects, it's going to be extremely difficult to bridge that gap."