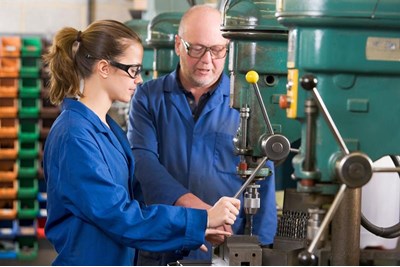 ​Apprenticeships lean too heavily towards highly qualified employees and not enough towards school leavers, according to a new report from the Centre for Social Justice (CSJ).

Although the apprentice system plays a part in reskilling established workers, the CSJ said it must not crowd out opportunities for people who are about to join the market, particularly during the pandemic.

One of the many reasons for this is that some employers use the apprenticeship levy fund to rebadge existing training or credit skills that existing staff already have rather than investing in new apprenticeships.

The report concluded that there was not enough information about the apprenticeship scheme for school leavers or employers, with 43% of those who employ apprentices not aware of any firm of financial support available to them.

Economically disadvantaged people have relatively poor access to apprenticeships due to their families being less likely to know about them, careers advice in schools leaning towards academic routes and university outreach not focussing on such programmes.

Around 800,000 young people aged 18–24 are expected to join the labour market this year, only to face a “barren landscape.”

The number of 18–24-year-olds not in education, employment or training could rise to one million in the next year, according to the Learning and Work Institute.

In particular, the report said intermediate apprenticeships are in free fall and their demise is affecting disadvantaged people.

The overall number of apprenticeships dropped by a quarter between 2014/15 and 2018/19, yet higher-level apprenticeships have grown substantially due to levy-paying employers preferring to focus on these.

The report suggested the government could boost apprenticeships by offering more in public-sector vacancies in professions such as nursing and teaching and support starter level (level 2) apprenticeships to improve the prospects of young people.

To refine and expand its traineeships offer, the government was urged to work with employers to build and support the associated costs of more pre-apprenticeship training and apprentices aged 16 to 24-year-olds with a time-limited wage subsidy.

Mark Creighton, CEO of Avado, told HR magazine that apprenticeships were vital for young people who are faced with the biggest challenges of their lives.

He said: “There is serious concern for the freefall in apprenticeships, which do so much for young people from disadvantaged communities in particular. However, I disagree that this is due to an over-heavy lean towards higher-level apprenticeships, which have a great deal of value in their own right. They allow people to upskill continuously in a fast-moving economy.

“We hope that the government will act on the report’s recommendations, particularly on enabling more SMEs to offer apprenticeships and subsidising apprentice wages to protect them from unemployment in the coming months.”