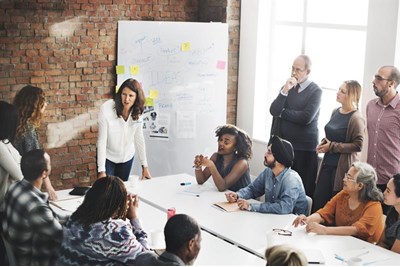 Katie thank you for an article on a little discussed topic. In most companies the dominant trait of leadership is white, male and heterosexual. HR and organisations have been focussed on addressing ...

The Parker Review on board racial diversity has been broadly welcomed, but are the targets too low?

The goal: for every firm in the FTSE 100 to have at least one BAME (black, Asian or minority ethnic) board director by 2021, and every FTSE 250 company by 2024. But does the recommendation go far enough, and are businesses capable of meeting even ‘one by 2021’? In the FTSE 100, 53 companies don’t have a single BAME board director and only 8% of director positions in the FTSE 100 are held by BAME people (only 1.5% by BAME UK citizens). So there’s even further to go on diversifying race in the boardroom than there is diversifying gender.

Speaking at the Parker Review’s launch, business minister Margot James said the lack of ethnic diversity on boards means firms are missing “voices and perspectives”. “So many people are being denied opportunities,” she said. “It’s not right that boardrooms in 2016 can still be predominantly male and exclusively white.”

For Frank Douglas, CEO of Caerus Executive and former HRD at Transport for London and Misys, the Parker Review is a welcome “starting gun in the dialogue for BAME”. But he feels it has been too long in coming. “I’m happy the conversation has started, but I’m disappointed we are in 2016 and it’s just starting,” he says.

Natalie Bickford, group HR director at Merlin Entertainments, a constituent of the FTSE 100 that already has one BAME board member, agrees a focus on ethnicity should be welcomed, as should a continued focus on gender diversity. “Let’s not kid ourselves that there isn’t more work to do on gender diversity,” she says. “But broadening the scope to ethnicity will add a richness to the debate and thinking.”

But Douglas believes the goal is neither “stretching nor bold enough”. He also worries that because it is much lower than the Davies Review’s headline-grabbing 25% “chairs will not think it’s a big deal”, and that may not lead to true transformational change.

Doyin Atewologun, visiting fellow at Cranfield University and one of the report’s authors, agrees the race target is easier to achieve than the gender one. “We are not expecting it to be that disruptive,” she says. “It’s about raising awareness so that it becomes part of the conversation.”

And it’s the challenge of having a conversation about race in the first place that partly explains, alongside other social and structural reasons, why so few BAME people are in senior leadership roles. “We are so much more comfortable talking about gender than we are talking about race,” says Atewologun. “All senior white men know a white woman – imagine them struggling to say the word ‘woman’. The hesitation around the words points to a fundamental factor in how we engage with race as opposed to gender; there’s that discomfort.”

At the launch John Parker, chair of Anglo American, acknowledged “this is an arena many of us in the corporate world find hard to discuss”, adding “we can’t let anxiety get in the way of action”.

At EY, which has, in the words of managing partner for talent Maggie Stilwell, “stretching” targets for 10% of new partners to come from ethnic minority backgrounds, an important factor has been getting leaders comfortable talking about race. “Some leaders are less confident on this topic than on gender diversity,” says Stilwell.

“We set up workshops to get the leadership more confident talking about race: talking is key. The lack of confidence comes from good intentions – a desire not to offend – but the impact is adverse.”

Another challenge is that race is “more complex” than gender, says Atewologun. “Generally speaking we have two genders but with ethnicity we have a plethora of ethnic groups; there’s not one BAME solution,” she says. “A black man will have a different experience from a Chinese woman. That complexity contributes to why we’ve made more progress on gender.” Although, she adds, the gender conversation has tended to focus on white middle-class women.

While most agree the diversity agenda needs to be ‘owned’ by senior management, HR will often be driving much of the change. “HR should find a way to make this about all of us,” says Atewologun. “Every person needs to see themselves as part of the system and the solution.”

Douglas feels the HR profession needs to “look in the mirror” and ask itself: “Do we have licence to operate on this issue?” He points out the lack of ethnic diversity among HRDs and calls on the profession to “walk the walk and put BAME progression on the table”.

On practical steps HR can take, Douglas advises “having a BAME filter to your talent management processes”, and reporting how many BAME people are on shortlists, high potential lists or get promoted. Stilwell adds that networks can be a powerful way to connect with and understand different groups.

“HR needs to work from an evidence base, not fads, when it comes to D&I,” adds Atewologun. She uses the example of unconscious bias training, which (while popular) is “far from the complete solution”. “There’s evidence it’s good for raising awareness and starting conversations, but some research shows that after training bias levels go up, and there’s little evidence it leads to long-term behaviour change.”

While the HR professionals and business leaders HR magazine spoke to agree that, in Bickford’s words, “any focus on broadening the diversity of our boards [is] a good thing”, the wider context of rising intolerance after the EU referendum, and Donald Trump’s recent victory, weighs on the minds of many.

Catherine Ward, group HR director at FTSE 250 firm Interserve, raises the issue of the “contradictory mood music” in the government announcing support for the Parker Review only weeks after home secretary Amber Rudd mooted plans to make companies report on their foreign workers. “A lot of us in HR have worked a long time on these issues, creating the pipeline [of diverse talent],” she says. “Things are moving, and then the wrong messages come through.”

“We have worked hard [since the EU vote] to reassure staff that [D&I] is still key to our strategy,” says Stilwell. “Some of our people have experienced racist and xenophobic comments, which has been difficult.”

But while the government’s message may not be as clear as it could be, the championing of tolerance, diversity and inclusion has never been more important. The Parker Review provides a welcome reminder to keep D&I on the agenda, and an impetus for HRDs to continue to push it. “The issue is: what does a global business need to succeed in a global marketplace?” says Douglas. The short answer is: diversity, in all its facets.

Katie thank you for an article on a little discussed topic. In most companies the dominant trait of leadership is white, male and heterosexual. HR and organisations have been focussed on addressing only two of those dimensions in terms of underrepresentation. It is hard to understand the omission on the most glaring area where there is a lack of diversity, race (there I said it). Yes, race is difficult, hard and uncomfortable; however that is not an excuse. Next time any reader goes to their firms senior management conference, senior HR event (the panel, speakers also) etc. -- look around the room for ethnic diversity and you will have your business case.