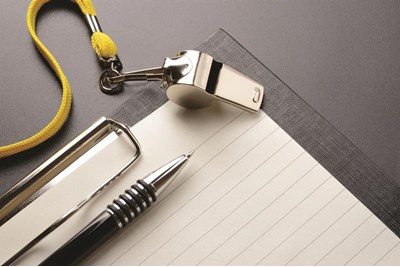 The subject of whistleblowing was thrown into the limelight again recently after Barclays group chief executive officer Jes Staley attempted to unmask a whistleblower who had made allegations about one of the bank’s employees. Staley’s behaviour is currently being investigated by the Financial Conduct Authority (FCA) and the Prudential Regulation Authority (PRA).

In light of such a high-profile case there have been renewed calls for stricter laws. But are these needed? And what can companies and HR do to ensure whistleblowers are handled effectively?

The Barclays incident started in June 2016 when the bank’s board and a senior executive received anonymous letters raising concerns about a senior employee.

The letters were logged and investigated by Barclays’ group compliance function as ‘whistleblows’, in line with the bank’s policy. So far so good. But then Staley, who had received a copy of the first letter, asked the bank’s group information security (GIS) team to identify the letters’ author (because he deemed them an unfair attack).

These attempts came to nothing. But earlier this year Staley’s actions were brought to the attention of the bank’s board after an employee expressed concerns about the adequacy of whistleblowing procedures at the business.

The board instructed external law firm Simmons & Simmons to conduct an investigation and notified the FCA, PRA and other “relevant authorities”. Barclays announced a “very significant” reduction in Staley’s bonus and said it would not issue further comment in case it affected the ongoing investigations.

The case is a fascinating example of whistleblowing, according to Keely Rushmore, senior associate at SA Law. “Barclays obviously did have rules in place that should have prevented Jes Staley from trying to find out the identity of this whistleblower,” she says.

She adds that from a legal standpoint whistleblowers are already well-protected, as there is no minimum length of service qualification period for employees to claim for unfair dismissal if unfairly treated for blowing the whistle.

And in 2013 legislation came in that replaced a requirement that they acted in ‘good faith’ with one that it must be an employee’s ‘reasonable belief’ they acted in the public interest.

But others disagree that the existing regulatory regime is sufficient. Cathy James, chief executive at charity Public Concern at Work (PCW), highlights that UK law hasn’t kept pace with overseas: “In other parts of the world whistleblower protection legislation requires organisations to have whistleblowing arrangements.”

James welcomed the FCA’s move last year to implement a series of rules and a policy statement to support whistleblowers who work for financial services companies. These requirements include appointing a whistleblowing champion, putting in place internal whistleblowing arrangements, producing an annual whistleblowing report, and informing the FCA if an employment tribunal rules in favour of a whistleblower.

PCW is currently working with financial services firms to create a benchmarking process for arrangements that ties in with the FCA rules, although this is still in the early days of its development.

The body has also developed a code of practice based on the findings of a piece of research called the ‘Whistleblowing Commission’, which looks at what good whistleblowing arrangements look like. The code is a helpful tool for companies looking to develop their own whistleblowing policy.

Although in general law there isn’t a requirement to have a policy and arrangements it’s advisable to have one, adds Rushmore: “You’d be silly not to do so, because of the potential adverse effects if someone blew the whistle and you didn’t deal with it properly.”

“We work very hard to try to get organisations to see that it’s not just the law that should be driving why they have whistleblowing arrangements in place. It actually makes very good business sense because you get to know about your problems before they turn into disasters,” agrees James.

But merely implementing a policy isn’t enough, according to Rushmore. “For policies to be effective they need to be supported by a business culture where speaking up and challenging practices and decisions is encouraged and accepted and individuals who do so are protected and supported,” she says.

That’s why it’s vitally important that such policies are backed up by senior personnel, according to Shokat Lal, assistant CEO of Rotherham Council, a local authority where strong whistleblowing arrangements have become paramount in the wake of 2015’s shocking inquiry into the widespread abuse of children in the town between 1997 and 2003.

“It has to be led by the top; not only by the most senior officers but also by non-executive directors, board members and trustees, depending on the type of organisation,” says Lal.

He adds that HR departments have a significant role to play. “The role of HR is to speak truth to power and they should be affording support and protection to the whistleblower without making any judgements,” says Lal. “They should also be able to support the investigation process by triangulating the evidence against other information they may already have.”

Rushmore agrees: “A lot of companies have got the right policies in place, but then not much is done to spread awareness of these policies. HR needs to promote these policies, let people know they exist, and put in place appropriate training, because a recurring problem I see is people might blow the whistle but managers aren’t quite sure how to deal with it so rather than follow the whistleblowing policy they might deal with it in an inappropriate way.”

Rushmore believes that Staley’s misstep should act as a salutary lesson to companies large and small. “The Barclays case is a good indication the public and press are very interested in whistleblowing cases, so organisations would be foolish not to have a robust policy and procedures for dealing with whistleblowing complaints in place,” she says.