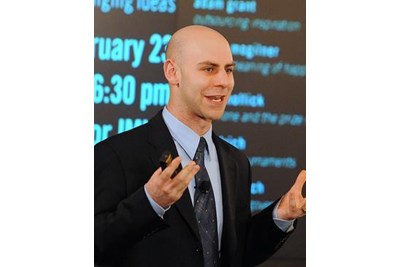 Adam Grant has been recognised as Wharton School of Business’s top-rated teacher, one of HR's most influential international thinkers and is among BusinessWeek's ‘top 40 business professors under 40’.

Adam Grant is the author of Give and Take, a bestselling book that has been translated into 27 languages and has been named one of the best books of 2013 by Amazon, the Financial Times and The Wall Street Journal – as well as being one of Oprah.com’s Riveting Reads, included in Harvard Business Review's annual The Ideas that Shaped Management listing, and cited by the Washington Post as a book “every leader should read”.

Grant, recognised as the highest-rated professor in the Wharton MBA programme four times, has speaking and consulting clients include Google, the NFL, pharmaceutical firm Merck, Goldman Sachs, Pixar, Facebook, Johnson & Johnson, the United Nations, the US Army and Navy, and the World Economic Forum, where he has been honoured as a Young Global Leader. At Wharton, he has been given the Excellence in Teaching Award for all of his classes and earned the Goes Above and Beyond the Call of Duty MBA Teaching Award. He has designed several experiential learning activities based on The Apprentice, in which students have raised over $325,000 for the Make-A-Wish Foundation while developing leadership, influence, networking and collaboration skills.

He has been profiled on the Today show in the US and in The New York Times magazine cover story ‘Is giving the secret to getting ahead?’. His studies have been highlighted in books such as Quiet: The Power of Introverts in a World That Can't Stop Talking by Susan Cain, Drive and To Sell Is Human by Daniel Pink, Thrive by Arianna Huffington, A Path Appears: Transforming Lives, Creating Opportunity by Nicholas Kristof and Sheryl WuDunn, and David and Goliath: Underdogs, Misfits, and the Art of Battling Giants by Gladwell. He is a contributing op-ed writer on work and psychology for The New York Times, where his recent articles include ‘Raising a Moral Child’ – shared more than 300,000 times on social media – and ‘Speaking While Female’ with Sheryl Sandberg.

He received his doctorate and master’s in organisational psychology from the University of Michigan, and his degree from Harvard University with several honours.

Grant's awards include a fellowship from the National Science Foundation, he has published more than 60 articles in management and psychology journals, and his pioneering research has introduced evidence-based techniques that increase performance and reduce burnout among engineers and sales professionals, enhance call centre productivity and motivate helping and safety behaviours among doctors, nurses and lifeguards.

Before his current career, he performed for more than a decade as a professional magician.

The power of powerless communication: TEDx

How to succeed professionally by helping others

Friends at work? Not so much

Madam CEO, get me a coffee