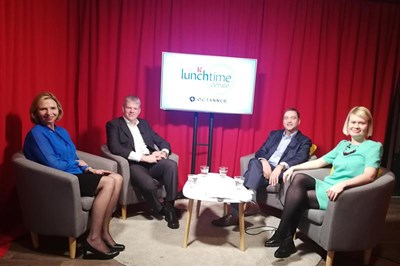 Creating a strong organisational culture can benefit many areas of the organisation, our webinar found

Gary Beckstrand, vice president of the O.C. Tanner Institute, said that while most organisations understand culture is important, the challenges of measuring it means it can come across as a vague concept.

“I think a lot of organisations have begun to identify culture and why they do the things that they do, but very few have pursued a strategy. I think that’s part of the reason why culture has become somewhat nebulous; I think we are unsure of how to measure it,” he said. “Everyone has come to understand that it’s important, but [people must] work out how to go about that from a strategic standpoint.”

When asked which area of the organisation benefited most from strong organisational culture, engagement was highest (20%), followed by retention (17%), productivity (14%), employee wellbeing (14%), creativity and innovation (12%) and risk management (6%).

Claire Gore, director of HR and OD at London North West University Healthcare NHS Trust, said that at her organisation a strong culture had a direct impact on the level of care staff offer to patients. “There’s a lot of research that shows that if you have happy staff you have happy patients, so it’s fundamental to us to improve the staff experience because that has such an impact on the patient experience,” she said. “We created our values very much based on putting patients at the heart of everything we do. The NHS, traditionally, was very doctor-driven but we really try to drive a culture based on patients.”

Retaining talent is one of the main motivations for creating a strong culture in the third sector, added Peter Reeve, head of HR at the Motor Neurone Disease Association. “It’s not hard getting people in, but trying to keep staff and keep up that level of engagement can be hard. So for us, allowing people to progress and develop their careers is critical,” he said.

In 2018 the government introduced a new corporate governance code, which included asking boards to create a culture that aligns with company values, addressing concerns over remuneration, and increasing board engagement with the workforce.

Commenting on whether the code will cause a change in corporate behaviour and spur more to report on culture, Beckstrand said: “I think we’ll get there. There’s a long way to go but the shifts in corporate governance are encouraging. As HR professionals a lot of our battles are in trying to get senior leadership to do what we want them to do, so if CEOs are feeling more accountable it gives us an opportunity to pursue that quite aggressively.”