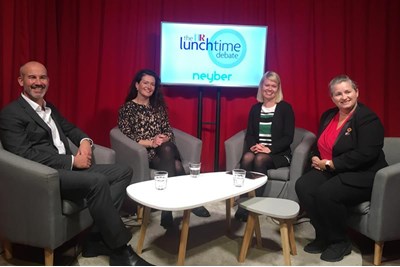 It's great that this is being spoken about amongst the HR community more and more. There are so many small ways employers can help ease the financial burdens of their employees, which in turn will ...

The vast majority of organisations and HR departments are immature when it comes to raising awareness and running initiatives around financial wellbeing, according to an audience poll taken during HR magazine’s ‘Health check on financial wellbeing’ webinar, held in partnership with Neyber.

More than half (55%) of respondents said their organisation and HR were not very mature, and 16% said they weren’t mature at all. Just 6% described their existing capabilities as 'very mature.'

Speakers on the webinar panel were unanimously “not surprised” by these findings.

Zurich UK’s head of performance and reward Stefanie Foulerton said she believed this to be representative of most UK organisations.

“We’ve seen the trend with mental wellbeing becoming more acceptable to talk about in the workplace,” she said, explaining that financial wellbeing lagged behind this. She highlighted that this area hasn’t typically been seen as the “responsibility” of the employer.

Heidi Allan, Neyber’s head of employee wellbeing, agreed: “The financial wellbeing agenda is where mental health was four to five years ago. We need to go on the journey,” she said.

This “need” was backed up by findings from another poll run during the webinar, that showed financial concerns are rising in the UK. When asked whether money worries are intensifying for members of the UK workforce, 61% said ‘yes they’re intensifying somewhat for workers,’ and 20% said ‘yes definitely’.

“Over the past three years we’ve seen the challenges employees are facing become more prevalent and unfortunately worse,” Allan said of the findings.

These challenges are only going to increase over the next couple of years, added Martyn Dicker, founder of The POD Consultancy and former director of people and learning at The Prince's Trust, pointing to macrotrends affecting the workforce.

Foulerton encouraged organisations “to improve internal comms and open up conversations on the topic of financial wellbeing”, as well as ensure all employees have access to fair pay. “What is a decent wage people can survive on and meet their commitments with?” she urged HR professionals to ask themselves.

Rather than rush in and spend significant amounts on a complex financial wellbeing strategy, Dicker advised firms to “start off small” as “one size fits none”. “Don’t be put off by trying to do anything too grand,” he urged.

A recording of this webinar is available here for those who missed the live event. Further coverage will be included in the December issue of HR magazine.

We're people's employer - not their mum. You'll be suggesting that HR should help solve the London Housing crisis next - which is probably a significant factor (if not the most significant factor) in the financial difficulties faced by young people in London, which you highlight.

It's great that this is being spoken about amongst the HR community more and more. There are so many small ways employers can help ease the financial burdens of their employees, which in turn will reduce stress, boost wellbeing and as a result positively impact productivity and company wide performance.

Sir, I believe you are missing a vital point here. In helping those that are struggling and who may even have no knowledge of the various help to buy schemes etc and how to get out of debt more easily/quickly you are directly helping yourself in HR and your employing organisation as you are reducing the pressures on your reward and benefits system. You will also improve productivity and engagement and each employee lost these days costs you three times salary on average, more in the case of more senior colleagues (Saratoga data). Moreover, Neyber is cost- and risk-free to the employer, so time to really consider what is best for your organisation in these straightened times with the increasing economic uncertainties which abound right now, such as BREXIT? I’d speak to Heidi, if I were you to find out more, plus the Neyber educational materials are first class!! Good Luck, Tim