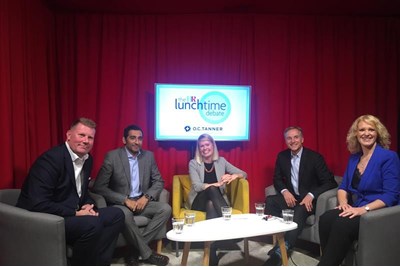 Four in five (83%) HR professionals have experienced working at an organisation they would describe as having a toxic culture, according to an audience poll taken during an HR magazine webinar.

“For most organisations, their cultures are made up of many subcultures, so even in a company with a decent reputation they can have pockets of toxicity,” explained panellist David Sturt, executive vice president of O.C. Tanner and author of Great Work: How to Make a Difference People Love and Appreciate.

How certain teams like to work together varies too, she said, meaning that their cultures can naturally differ. “What my marketing team wants compared to my tech team is quite different,” she explained.

But HR lacks a strong understanding of what culture is and how to change it, according to another poll taken during the webinar. It found that only 8% of respondents think that the wider HR community has a very good understanding of culture, with nearly half (45%) agreeing that it has only a moderate understanding, and 18% feeling that understanding is poor.

“The question for HR professionals is: do they speak truth to power?” said Shokat Lal, assistant chief executive at Rotherham Council.

“You’d hope they would at HRD level but it’s about how you cascade that down,” he said, adding that HR needs to be “front and centre”, not only to put in place policies, but to create the culture that sits behind them.

Pointing to recent high-profile cultural and corporate governance failures in the third sector, Guy Pink, former interim chief executive and executive director at HR Addaction, said that there were questions around where HR was in those instances. “In Oxfam, there wasn’t a senior enough HR person on the board or executive team,” he reported.

“The voluntary sector deals with a huge number of vulnerable individuals and sometimes the staff they employ can be similarly vulnerable.” This means that checks are “crucial” to avoid things “slip[ping] through the net”, he said.

However, the panel agreed that HR is starting to place culture more firmly on its agenda. “The word has been around for generations, but from an HR perspective for many it feels squishy and ambiguous,” said Sturt, adding that culture isn’t a “discipline” understood in the same way as other people processes. Sturt predicted though, that over the coming years “HR will have to become more intentional in shaping culture”.

A recording of this webinar is available here for those who missed the live event. Further coverage will be included in the January issue of HR magazine