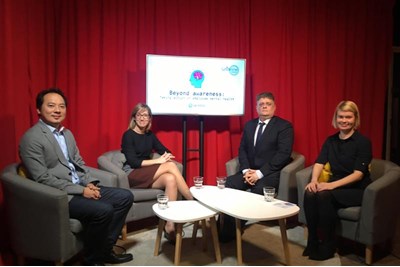 Eight in 10 (83%) HR professionals believe mental health pressures on employees and rates of mental ill health among the workforce are higher than they’ve ever been, according to an audience poll taken during an HR magazine webinar.

“In the past 20 years we’ve had a problem with mental health and have seen year-on-year increases in the number of people being signed off work with mental health [issues],” explained panellist Craig Jackson, professor of occupational health psychology at Birmingham City University.

Jackson pointed to several pressures that have mounted over the past two decades, beginning with the “smoking gun” of the rollout of email in the '90s, which he said means it “has never been easier to give more work to people”.

But, despite recognition of the rise in mental ill health among the workforce, employers are falling short when it comes to backing up awareness-raising with practical support, according to another poll taken during the webinar.

Sally Austin, group HR director at Costain, also speaking on the panel, said that while “there is a lot more to be done” she was “surprised” by the survey results. She explained that some practical measures can be easy to implement, such as training employees as mental health first aiders.

“It’s too early to tell if this is the right intervention, but we have to do something and we’ve done this across our organisation,” she said. “And what’s more important is training up every line manager to understand the practical pieces.”

The panel agreed, however, that such a first line of defence must be backed up with professionally-qualified support for those who need it – through employers providing access to private healthcare for example. Jackson highlighted that he was yet to see "the evidence base" for training mental health first aiders.

Chieu Cao, co-founder and CMO of Perkbox, added that as well as educating managers organisational culture is key. “Employers that [do well in providing practical support] are those that have open and engaging cultures, and have created environments of psychological safety,” he said.

There are numerous obstacles holding employers back from offering concrete, practical, mental health support, an audience poll agreed, including lack of resource (25%), lack of senior buy-in (23%), not knowing where to start (19%), lack of HR expertise in this area (18%), and concern about intruding into staff’s personal lives (15%).

Cao agreed that HR doesn’t always know where to start. “[One of] the biggest hurdles is starting off with practical mental health support,” he said, adding that this shouldn't hold organisations back. “Break the ice and create a programme, make mistakes and learn from them,” he advised.