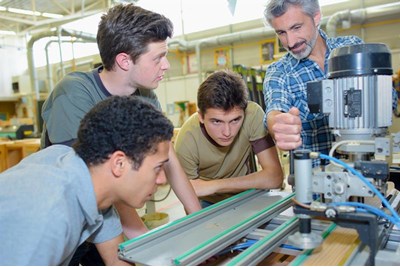 Nearly two thirds of 16 to 18 year olds believe most apprenticeship opportunities are in sectors characterised by largely male workforces, according to research from Prudential.

More than six in 10 (61%) of the 621 teenagers polled thought that such opportunities would be most prevalent in industries such as construction, manufacturing, agriculture and IT.

This is despite government data which shows apprenticeships are available in 1,500 job roles covering more than 170 industries, and that the gender split between successful applicants is in fact slightly weighted towards women.

As a result, while 65% of parents would encourage their sons to consider an apprenticeship, only 57% would do the same with their daughters.

“The growing skills shortage in sectors like construction and engineering is all the more reason to support more young women into relevant apprenticeships,” she told HR magazine. “But Young Women’s Trust has found that young women across the country are shut out of these sectors. It is shocking that last year, in London, there were no higher level women apprentices in either construction or engineering.

Easton said employers should consider the personal circumstances of disadvantaged young women. “We would like to see clear pathways made available to young women with low or no qualifications, so they can start apprenticeships and progress to the higher levels,” she said. “Much greater provision of part-time and flexible apprenticeships would also help young mothers and carers in particular, who often have to balance care with work.”

Simon Moffatt, human resources director at Prudential’s UK insurance business, said that no one should miss out on an opportunity to further their career, education or training because of myths and misunderstandings. “Clearly more can be done to get the message to students that apprenticeship opportunities now exist across 170 different industries and that there should not be any gender stereotypes when it comes to career choices,” he said.