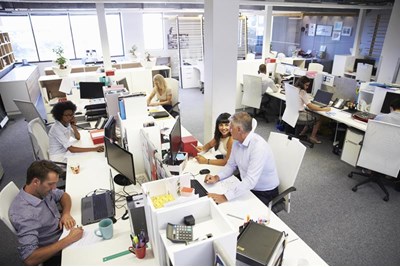 Noise, lack of privacy and space are some of the factors causing the greatest dissatisfaction among office workers

Nearly half of employees (43%) don’t feel their workplace helps them be productive, according to workplace effectiveness assessor Leesman.

The firm has been collecting data since 2010 as part of an ongoing study, and has so far recorded the views of 276,422 employees globally, 28% of whom work in the UK. The data covers 2,160 workplaces in 67 countries.

The Next 250K found that 57% of respondents state that their workplace helps them to be productive, while 28% disagreed with this and 15% had no view either way.

“Our workplaces have a massive impact on how we are able to perform. They can be obstructers – forcing employees to go through obstacle after obstacle to achieve their goals or even losing staff – but they can also be catalysts that give you a competitive advantage,” Leesman’s development director and head of insights and research Peggie Rothe told HR magazine.

“What’s shocking is that so many organisations out there are not getting what they should from the workplace. Many aren’t utilising the environment as a tool to support them in what they are trying to achieve.”

While there were found to be both pros and cons to open-plan offices, the biggest barriers to productivity were found to be space between workstations, dividers and noise levels. Other factors that led to the greatest levels of dissatisfaction include air temperature and quality, people walking past desks, lack of quiet areas, and lack of ability to personalise workstations.

According to the study, to create better working environments that support business and employee goals employers should focus on the needs of those with more complex roles, typically the 35- to 44-year-old age band, that might carry out their work in multiple settings (both inside and outside the office).

It also warned of the pitfalls of investing huge sums in relocation or refurbishments without thinking them through.

“A big challenge is to make sure that when you make big changes, for example if you’re going to create multiple settings to support the multiple activities that might be involved in people’s work, that they are then used in the right way,” said Rothe.

She said that it had been shocking to see through the research how many businesses hadn’t been able to achieve a high-performance workplace after making big investments in changing their surroundings.

“Only 30% of the 145 businesses that we measured ‘post-project’ are seeing any results, and that’s worrying,” she added. “When you make a change you need to look at what the organisation does and what its employees do in their daily roles before you start."

Rothe entreated employers and their HR teams to consider “what works now and what doesn’t and how could you be working in the future?"