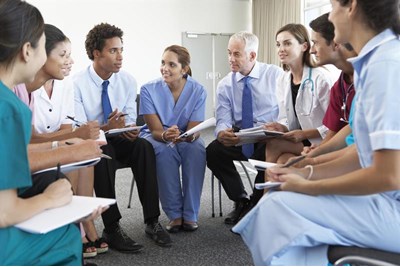 The NHS was thrown into turmoil earlier this year after the government rejected a large number of Tier 2 visa applications from skilled medical workers who live outside the European Economic Area.

It’s estimated that from December 2017 through to May 2018 around 2,360 visa applications made by doctors with job offers in the UK were refused to ensure the government stayed within its 20,700 annual cap on Tier 2 visas. This led to a shortfall of NHS workers and caused numerous health trusts to recruit agency workers to pick up the slack. Thankfully some much-needed relief came in June when the government announced it was relaxing laws around Tier 2 visas for NHS applicants.

But will this put an end to the health service’s staffing woes? Where does it leave other organisations and industry sectors equally reliant on overseas workers? And with Brexit looming large on the horizon, what more can bodies like the NHS do to ensure they are future-proofed against similar issues in the coming years?

The Tier 2 visa crisis arose after the government started to see the number of applications for visas exceed the monthly allocation of available places late last year. This rise was driven by the tide of EU workers leaving the UK ahead of Brexit, with the NHS – which accounts for around 40% of all Tier 2 places according to government estimates – particularly badly affected by this ‘Brexodus’. The fallout from the refusals was felt across the NHS.

“Overall the Tier 2 visa issue resulted in delayed recruitment to approximately 10 positions [at our Trust] – including six medical [doctors] – as a result of visas being rejected,” says Tom White, assistant director of HR at Frimley Health NHS Foundation Trust. “The delay recruiting to substantive positions not only affects service delivery, but also generates increased costs as a result of having to fill staffing gaps with agency workers.”

So when the government announced in June that Tier 2 visa applicants for NHS posts would be excluded from the cap the news was broadly welcomed. However, few people believe the exemption signals the end of the NHS’ short-term staffing problems. As Karendeep Kaur, immigration analyst at Migrate UK, points out: “Although the cap has been lifted [for the NHS] we predict it will take a number of months for the situation to settle down because the Home Office is going to experience a backlog.”

White also thinks the relaxation of the rules for NHS applicants is not in itself going to solve the health service’s staff shortage issue.

“Last year’s Health Education England’s workforce plan detailed the expected future staffing challenges with a continued shortage of nurses and doctors nationally,” he explains. “If, as a result of Brexit, we see an increase in the number of existing EU staff leaving or a decrease in the volume of EU candidates applying for positions then clearly this will be detrimental for the Trust.”

Danny Mortimer, chief executive of NHS Employers, also acknowledges that the relaxation of the visa rules isn’t a panacea for wider staffing issues.

But he believes “it provides an ideal opportunity and much-needed space for both government and employers to work on the foundations for a post-Brexit migration policy that works for health and social care employers and the wider UK economy”.

He adds: “There is a raft of activity across the NHS designed to raise the profile of our fantastic career opportunities, while increasing and diversifying the pipeline of people working with our patients. This includes a new pay offer; the launch of a recruitment campaign for nurses, midwives and health professionals; a 25% increase in medical school places; and the creation of new roles, including higher apprenticeships.

“These actions will take time to increase supply and we also need to be able to access talent from outside the UK – from within the EU and the rest of the world.”

In June this year the government announced it had taken steps to address staffing issues within the NHS in the longer term by providing an additional 1,500 new training places for nurses and doctors, with a record number of undergraduates poised to begin medical training by 2020. This, coupled with the relaxation of Tier 2 visa rules for NHS applicants, should hopefully go some way towards plugging the staffing void.

The other upside to the NHS’ exemption from the Tier 2 visa application cap is it will free up additional places for other much-needed highly-skilled workers, such as engineers and teachers.

However, immigration experts point out that there remain a number of major flaws within the Tier 2 visa system, one of the most onerous being the restrictively-high minimum salaries that applicants need to secure from UK employers under the terms of the regime – in May this figure stood at around £55,000 per annum. This puts recruiting overseas workers out of reach for many companies and industry sectors, according to Kaur.

“A lot of companies in the engineering sector are saying we don’t offer our staff £55,000 to £65,000, so if that is the minimum requirement imposed by the Home Office the only thing they can do is offer better wages, but a lot of companies simply can’t afford to do that,” she says.

Gerwyn Davies, senior labour market adviser at the CIPD, also believes the Tier 2 visa system is fraught with issues. He says that the government could go a stage further in revamping its approach by reducing the substantial cost burden on employers that recruit non-EU workers, which includes a health surcharge and skills levy that are significantly higher than in most countries.

“As we know, many public sector employers are under financial pressure and face genuine recruitment difficulties for highly-skilled roles, so an additional step might be to halve the sponsorship licence fee for these employers,” suggests Davies.

In the meantime, for those employers that are looking outside the EU to recruit people he says there are options available, such as ancestral visas and the youth mobility scheme, that they could use to circumvent the current system.

“This may partly explain why non-EU immigration for work-related reasons has increased over the past year to offset the fall in supply of EU migrant workers,” highlights Davies.

For the time being HR experts hope that the relaxation of Tier 2 visa rules in relation to NHS workers won’t just benefit the health service, but also other companies and industry sectors that rely on skilled workers from overseas.

But only time will tell if the government’s recent intervention works, or if it is just a sticking plaster on a wound requiring much more serious treatment.