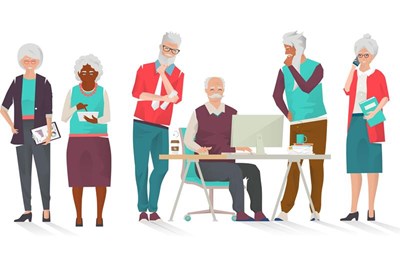 As the workforce ages it’s important to celebrate age diversity. More and more people are working until much later in life and this presents new and exciting challenges for organisations to harness the wider range of skills available to them.

But scepticism still remains around employing senior staff, and there continues to be a variety of misconceptions around their ability among bosses.

This article identifies five common myths about older workers and offers practical advice on how we can overcome these stereotypes.

Legislation to outlaw age discrimination in the workplace was first introduced in the UK in 2006. It was designed to protect people of all ages. But older workers, loosely defined as people over the age of 50, are more likely to be adversely affected by age-related stereotypes.

Age discrimination laws should help to change stereotypes over time but so far there is little evidence it has declined. Research that examines pairs of job applications that are sent to employers for the same job, where the only difference is the age, has objectively shown that age discrimination persists for a group of jobs stereotypically seen as more suitable for younger workers, such as personal assistant and bar work.

As part of our ‘Working Late’ research project, we carried out an interview study of 20 employers to understand the ways they are responding to recent age-related legislation, in particular the removal of the default retirement age and introduction of the Equality Act (2010). While many employers held age-positive views, and discussed strategies to embrace a multi-generational workforce, some evidence of age discrimination and ‘age-typing’ from a small minority of employers was revealed.

One example of this was a manager in marketing and communications revealing an overtly ageist recruitment strategy: “We’re actually looking for someone between the ages of 25 and 35. That’s not being ageist but that’s just ensuring they’ve got the energy, the drive and the passion to learn.”

The results from our Working Late project support other findings that age discrimination is still common, despite being illegal for more than a decade.

Research released this year in the US (where age discrimination has been illegal since 1967) by the AARP, has found that 61% of people surveyed say they’ve personally seen or experienced other colleagues being discriminated against on the basis of age.

Here are the five most common stereotypes about older workers our research uncovered, and how they can be challenged.

There is a huge amount of research that dispels this myth. Older workers have been found to have lots of experience adapting to new tools, environments or working practices. The average age for successful entrepreneurs is actually between 42 and 47.

2. They are less productive

There is very little evidence supporting this in people of working age, even when you take into account the fact that people are retiring later than before.

We might expect physical and cognitive abilities to decline with age, but this tends to be at an older age than you would be working. Age and workplace performance should not be seen as linked and there is plenty of evidence to show older workers are just as effective as younger colleagues.

3. They take more time off sick

Research has shown this to be an inaccurate assumption. On average it is true that older workers tend to take more time off on long-term sickness. But they also take less time off because of short-term illness with no notice.

Older workers are also at lower risk of accidents in the workplace, so on average employees of all ages tend to take a similar amount of time off work for sickness. There are also strategies employers can use to improve the health of the workforce at all ages, allowing us all to live longer healthier lives.

4. They will retire and leave the organisation

When someone joins a company aged 24, for example, there is no guarantee that they will stay any longer than an older colleague because of the quite modern practice of regularly switching jobs. We now change jobs around once every five years on average. Employers are therefore faced with the same retention dilemma for all age groups.

5. They are ‘overqualified’ (and this is bad)

In some of our recent research terms such as ‘inflexible’ and ‘overqualified’ were examples of feedback given to older applicants when they were rejected for jobs. It is hard to justify the use of the term ‘overqualified’, although it can perhaps be explained by employers being concerned about people leaving the job after a short space of time for a role that better matches their skillset.

Yet there are many good reasons an experienced worker may want to take a step down to a position that requires fewer specialist skills than their previous job. Older workers often report wanting part-time, more flexible or less stressful jobs, which might explain their attempts to move into jobs they may be viewed as ‘overqualified’ for.

There are many benefits to having a workforce with a diversity of ages. To make the most of the skills of an ageing society, and to understand diverse customers, we must think beyond age stereotypes.

So how can we overcome these preconceptions? The human mind and its decision-making processes are incredibly complex. Some of the processes that lead to discrimination include: selecting employees that are similar to ourselves or ‘in group’, which can lead to unintentional discrimination; and making quick decisions rather than slow ones. We tend to think with rules of thumb, or heuristically, which makes decision-making much faster.

However, when making a selection decision that will influence an individual’s career and the direction of the organisation, this is not the place for a quick decision. We often think we are making a slow analytical decision, rather than a fast one when we choose quickly. And we then select reasons to justify our initial choice.

To overcome these and other biases that can lead to discrimination, we must take a scientific approach to selection.

Rigorous job analysis followed by tests that accurately represent the type of job an individual will carry out, are extremely useful in finding the best candidate. Taking equal ratings from a range of different tests, rather than relying too heavily on an interview, can also be useful. When interviewing introducing rigid structure and using behavioural or situational questioning can also reduce bias.

To limit the tendency of groups to follow the leader, make individual ratings of prospective employees and discuss these after they are written down. Additionally, having a diverse range of assessors can bring some balance to the unconscious bias that we all carry.

It is important to also think inclusively about the way we advertise jobs. Older individuals often de-select themselves from the job application process when an image or wording of an advert suggests the employer is looking for a young employee. This process is called ‘stereotype threat’ and means that we may never see the best applicants for a role because of where and how we advertise.

Finally, removing information such as age or graduation dates can help reduce discrimination in the screening process. A transparent selection process is likely to be less biased and offers defence to a potential legal challenge on the basis of perceived discrimination.

Sheena Johnson is an occupational and chartered psychologist, senior lecturer and head of the Organisational Psychology Group at the Alliance Manchester Business School, University of Manchester. Ricardo Twumasi is a PhD researcher.