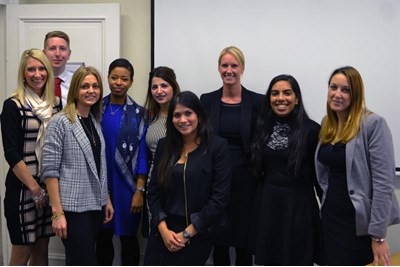 What do the next generation of HR leaders think the future of HR looks like?

When we ponder the people management challenges of the future we are used to seeking out the wise words of HR practitioners (and thinkers?) whose authority and wisdom derives in part from their years of hard-won experience.

But those of us in HR who are approaching the twilight of our careers, may not be around to face up to some of the trials posed by demographic and technological changes at work. Nor will we have to manage the long-term consequences of the changing nature of the UK’s relationship with the EU. So what do those just starting out on their HR careers think about the world of work in 2025 and beyond? Will they see the challenges through the same ‘lens’ as their more senior colleagues? What skills do they think that HR professionals will need to deploy in a decade or so?

Over the summer of 2016 the Institute for Employment Studies (IES) convened a group of 10 of the ‘next generation’ of HR professionals to try to find some answers, in partnership with HR magazine. We set them a ‘homework’ question which prompted them to think about the consequences for the psychological contract, the employee value proposition and the skills of HR professionals of the demographic, technological and business changes likely to shape the future. Their task was to research and assess the evidence and to present their conclusions in October to an invited audience of HR professionals, academics and consultants and have them interrogated and challenged.

In this and a second article next month, I want to share with you what they told us, how their messages went down with their audience and what I think it all means for the future of work and, more specifically, for the future of the HR profession.

Each of our participants was nominated by their HR director and they were all in the early stages of their HR careers – though all were in roles with significant responsibility. They were James Bodger (Capita), Joanne Cartwright (Serco), Jamie Cotton (IES), Alison Crawford (AMEX), Sophie Crompton (G4S FM), Zahra Khan (Chime Communications), Vanessa Martinez Garrido (AMEX), Rakhee Patel (Dorchester Collection), Selina Pouni (Atos), Munpreet Rai (Atos) and Simone Thomas (Capgemini). They had two face-to-face meetings and carried out the rest of the work via conference calls and email – fitting these in between busy jobs and competing pressures at work. So what were their core messages?

The first conclusion they drew was that, despite changes in the labour market, the advances of digitisation and the changing composition of the workforce, the main high-level goal of HR was always going to be to help organisations maximise the potential of their people. However, the mechanisms which HR will use to do this are likely to be very different in a decade or more.

What was striking to me was, first, how certain they were that technology would have a transformative impact on how and where we will work and, second, how unfazed they were about the prospect. They all worked in organisations where, to a greater or lesser extent, working remotely, across time-zones and via a number of technology platforms is ‘normal’. For them it is only a short and very logical leap towards more ‘uberised’ or ‘on-demand’ work for some workers, for office-based jobs to diminish in number and for hierarchies to be replaced by social media-enabled collaborative networks. In the future, they argued, permanent jobs and the apparent precariousness of the ‘gig’ economy can co-exist as many workers needs vary over what for many will be a 50-year career.

What was uplifting about this is that employees of the future will expect their employment experiences to be mediated through technology and these expectations will only be met if HR professionals are, themselves, embracing technology in the way they do their jobs.

Another fascinating reflection, for me at least, was how employee-centric their conclusions were. For this group the idea that people are an asset to be stewarded or a resource to be maximised was alien. They spoke fluently about the need for HR to reflect on the needs and aspirations of employees in the way that CEOs and operational managers shaped the way that businesses are run. This, I think, goes some way beyond a model which is content only to chase ever rising employee engagement scores. The group was clear that this must involve a strong emphasis on promoting positive mental health among employees as a way of promoting agility, resilience and sustained high performance.

This did not strike me as a call to return to the old ‘welfare’ model of personnel management. Instead it was a call to be business-focused, strategic but also authentic and humane.

This led to a fascinating debate with the audience about the role of HR as the ‘moral compass’ of business. Was HR prepared to ‘call out’ poor behaviour among executives or governance failures? How can HR redeem itself after, some argue, it was found to be asleep at the wheel when the financial crisis hit? What role will HR need to play in the forthcoming debates on executive pay and on worker representation on boards?

The group had answers here too, and I’ll discuss what they told us and what I think it means for HR in next month’s article.

Let's not underestimate optics, but does the 'future of HR' not include any place for BAME men? Frank Douglas, FCIPD @fdoug23

I guess the face of HR will become more male as the compensation rises. It's interesting that most female-dominated professions are less well paid.

The article mentioned their "homework" was to research and assess the evidence. Will there be any links or examples provided of evidence to confirm their outcomes e.g. that company intervention with mental health has a direct impact on sustained high performance? If there is evidence (cause and effect) to demonstrate this link then it would be beneficial to all HR practitioners as it could be the key to unlocking an increased budget from our FD's

Why would anyone send their young talent to the IES to consider the future of HR? The real global issues of human capital reporting and human governance are not even on their agenda.

"Why would anyone send their young talent to the IES to consider the future of HR? The real global issues of human capital reporting and human governance are not even on their agenda. " A little harsh - maybe it's precisely because IES is known for not playing "buzz word bingo" and latching onto the latest fads being flogged by the HR consultants?