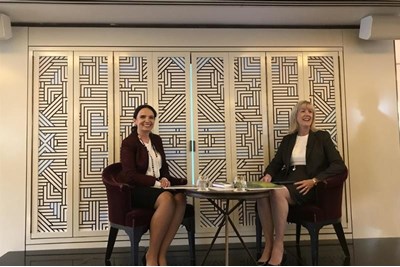 Leaders must create organisations that are human and purposeful, and then profits will come later, according to Vlatka Hlupic, professor of leadership and organisational transformation at Hult Ashridge Executive Education and CEO of The Management Shift Consulting.

Speaking at the Global Peter Drucker Forum 2019 pre-event at the Ivy Club in London, Hlupic told how leaders in the fourth Industrial Revolution must be very different to how they were in the past.

"The old way is based on command and control… bureaucratism… That worked very well in the first Industrial Revolution, but we’re now in the fourth. And in the fourth we’re learning to unleash humanity,” she explained.

Hlupic pointed to research that shows bad management and leadership have a damaging effect on people’s health, with one million people in China alone dying each year because of stress linked to bad leadership.

“We need to move from the old way of managing people to new ways based on passion for work, communication, collaboration, communities…” she said. “Then we’ll get step-change increases in performance, engagement and profit as a result.”

Leaders fit for the fourth Industrial Revolution need to “create caring organisation cultures” and “give people the opportunity to develop and grow and self-organise and be passionate about what they do”.

Hlupic shared insights from her first book, The Management Shift, in which she outlined her five-level leadership model, explaining that there are “five levels that our individual mindset goes through and a corresponding organisational culture at each level”.

The “level is characterised by leadership style”, she added. Level one is where “people are depressed, there’s a lot of fear and blame and people fear losing their jobs”, she said, adding that fortunately this is not often seen in organisations.

Then there’s level two (where the culture is stagnating and people do the minimum they can get away with) and level three (where people are micromanaged, just do what they are told and are “led by big charismatic leaders with big egos”). Hlupic said there is a “big shift” between levels three and four, with the lower three levels existing where there are “traditional management” styles.

Level four is where there is “a culture of collaboration”, trust and community, and level five is “limitless” and is “driven by our love for humanity and wants to solve big problems”.

However, staying at level five all the time is unsustainable, she said: “We can’t sustain level five because it’s too intense.”

She gave the example of Steve Jobs’ team in the '80s working day and night on creating the first Apple computer. “It’s too intense… [those teams] are brainstorming 24/7 and are often taken away from the usual physical environment for a time,” she explained, pointing out that this can’t be maintained for prolonged periods of time. “So the ideal is level four, then move to level five sometimes, then back to level four.”

Hlupic said her “dream” is to see the majority of organisations reach levels four and five. But the reality is that today only around 10% to 15% of companies are there.

There can be pockets of different levels in an organisation, but levels can’t be skipped, Hlupic continued. “We can only shift one level at a time,” she said. “If someone is a level two then you have to micromanage them next, you can’t just empower them.”

Not everyone is ready for such a shift, however, Hlupic acknowledged. “There’s lots of barriers: leaders are not ready, employees are not ready, [there's] poor communication... And we know from neuroscience that when we’re faced with change the part of the brain for anxiety and stress lights up,” she said.

“Use the language of the level above and give people projects where they have to collaborate and achieve those tasks and objectives,” she advised, adding that “sharing stories” is also powerful.

“When people are stuck at level three it’s like having a brick wall in front of them. Create cracks in the wall so the light can start coming through,” she said.

Hlupic recommended that organisations need to start top down and bottom up and “it will spread like ripples – you can’t change everything and everyone at one time”. However, she conceded that to shift an organisation up a level it’s crucial that the leader is a level four. “The organisation shift is a reflection of the leader’s consciousness – it’s like a mirror,” she said.

Hlupic added: “Everyone needs to be aware that they can all spread ripples and make a difference.”