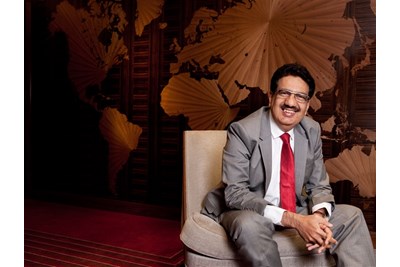 Vineet Nayar is one of India's most successful exports, thanks to his 'upside-down' management style. Here, in an exclusive interview, he discusses leadership, developing markets and getting things wrong.

In 2005, Vineet Nayar was in a situation he likens to “standing on the ledge of a building that was on fire”.  He had just joined Indian technology giant HCL Technologies as president (he would later serve as CEO until 2013) and the business was in trouble. It was losing “mind share, market share and talent share,” he recalls. “The question was how I could create a high performance organisation that would be able to outgrow the competition.”

The answer, as many readers aware of Nayar’s now widely celebrated leadership philosophy will know, was to flip conventional management on its head. He used culture as a competitive advantage and put employee empowerment and satisfaction at the heart of everything. Over the next six years, HCL’s revenues grew 600%, claims Nayar, and the company has ballooned to 90,000 employees across the world. It is without doubt one of India’s most compelling success stories, featured in depth in Nayar’s book Employees First, Customers Second: Turning Conventional Management Upside Down.

Since then, he has moved from CEO at HCL to being vice-chair, acts as a senior advisor to companies looking to create high performance through their people and is involved with the McKinsey Leadership Institute. He has also moved into philanthropy and is currently on a mission to  ‘create a million smiles’ through his charitable organisation Sampark Foundation, which “looks at how we can bring about large-scale innovation to local change”.

With organisational hierarchies under more and more pressure to be fit for purpose in an increasingly transparent and autonomous world, Nayar’s ‘upside down’ management ideas are becoming more relevant than ever. So when HR magazine was offered the    chance to meet him while he was on a trip to London, it was an offer we couldn’t refuse. Over tea in Claridge’s, Nayar shared his lessons on successful leadership in 2014 and beyond, why failure is crucial to success, and explained why rooms should light up when an HR professional walks in. Here are some of his key leadership lessons.

HR is the expert, but this is a business issue

According to Nayar, it is now more important than ever to “think about, talk about and experiment with” new organisational structures where managers are held accountable to employees and the focus is on “enthusing, encouraging and enabling staff”. However, he is keen to point out that this is “not an HR responsibility; this is a business responsibility".

A common mistake HR practitioners are making, he believes, is not understanding that it is business growth they need to contribute to, rather than focusing on things like employee engagement in isolation. Instead, HR leaders must use their expertise around people issues to understand how the organisation can grow faster. “These ideas need to come from the HR community and take centre stage in the company," he adds.

Nayar likes to tell stories. It makes spending an hour in his company an enjoyable if slightly circuitous and faintly hypnotic experience. He tells the tale of two boys fighting over a girl, each inviting more people to fight for them until they both had a small army. He continues: “When 1,000 people were fighting, one boy realised: ‘If all these people are in the business of fighting, my business should be to enthuse, encourage and enable them’. That day the leader was born, one who does things differently to the rest. Then the leader made his first mistake: he hired an HR person and gave them the job of enthusing, encouraging and enabling people.”

Where things need to change is for HR to pass that responsibility back to the leader, providing the expertise and ideas rather than trying to do it all themselves.

It’s the job of the CEO to listen to HR, Nayar continues. “If anyone can come up with ideas on how to make people the centre of your operation, it is the head of HR,” he says. “Everything we implemented in HCL was thanks to some fantastic HR minds. They are professionally trained to answer these questions,while we as leaders are not.”

So in Nayar’s opinion, what makes an ideal HR director? That would be someone who understands both what the leadership and the employees are seeking (he cites growth and aspiration respectively in his case). It’s someone who plays the role of the critical friend: “They need to be able to tell me if what I am saying is nonsense.” And they need to be innovative, experimental and passionate. “If as an HRD, you go into a room and it doesn’t light up, you’re in the wrong job,” says Nayar, and he’s only half joking.

Don’t be afraid of making mistakes

Nayar is keen to frame his work at HCL as a series of experiments. They go hand-in-hand with mistakes – in fact he estimates that about 90% of his experiments at HCL were mistakes, and only 10% worked. But that doesn’t mean they weren’t worth doing.

“When you experiment, you should know full well there’s a 90% probability that your hypothesis will fail,” he says. “Frame it in a way that you’ll either prove it right or prove it wrong. The problem is companies tend to approach things as initiatives [not experiments].’’

Initiatives are most likely to fail, he believes. Frame things as experiments, and make clear that failure is nothing to be afraid of, and you will be more likely succeed. The problem with announcing a series of initiatives is that “people sit back and wait to judge you,” he says. “If you communicate to people that you’re going to experiment together and it might fail, people will collaborate, participate and give you feedback. The moment you stand on a chair and announce an initiative, all the people who do not agree with it will work to pull you down. You have to experiment your way through and be prepared for 90% of it not to work.”

He gives the example of launching a programme at HCL that allowed employees to open ‘trouble tickets’, which the management then had to solve in a limited time. When it launched, thousands of tickets were opened up. “We started celebrating that we had captured and solved so many problems,” he recalls. “Then a 23-year-old employee in London said: ‘Vineet you’re a fool. What CEO celebrates that their employees have thousands of problems?’” The programme was duly changed to become preventative rather than reactive. “If you approach things in an experimental fashion, you can change things without it impacting in a negative way,” Nayar adds.

Although he has left the executive committee of HCL, he continues to experiment with ideas for new organisational structures, beyond the upside down pyramid of his ‘employees first, customers second’ model. “I am currently experimenting with a stock exchange structure, where a buyer and seller mutually co-discover value, and the role of the stock market is to give the framework of governance,” he explains. “The buyer and seller do not interact with the stock market. Could the world of the future be like that? Where value is co-discovered within the business, but the role of the organisation is only to give the enabling environment?"

With a 2013 report from Standard Chartered Bank claiming 70% of global economic growth between now and 2030 will come from emerging economies, there’s no excuse for not understanding how business works in developing countries.

But Nayar’s number one lesson is not to overcomplicate things. “All humans want recognition, fair play and a place to perform, and the same is true of Indian people,” he says. “The moment you overcomplicate it with culture or mannerisms or behaviour, you get it wrong. People’s response is the same on what matters most, so keep it simple and straightforward.”

However, he acknowledges there are some different characteristics to be aware of. Firstly, aspiration levels are much higher among workers in emerging markets. “The entitlement mentality is less, but the aspiration levels are higher – you need to tap into that,” he says. “Instead of telling people what to do, give them problems to solve.”

Then there’s the importance of inspiration. “Inspiration is more relevant to developing world employees,” Nayar explains. “They are seeking inspiration, and they don’t get much at home. In the office, they want to be inspired. If you inspire people, you will get much more from them.”

Finally, he believes employees working in emerging economies are more “sentimental”, something HR must be acutely aware of when considering change programmes.

“In the developed world, you have a social fabric where the consequences of losing a job are not that bad,” he points out. “In the developing world, the consequences are very bad. That makes people sensitive and the power of intent is critical. Be fair and clear on what your intention is.” Keep all this in mind when dealing with employees in emerging markets and “you will get more out of an Indian or Chinese workforce than you will anywhere else in the world,” he promises.

According to the 2013 KPMG report Time for a more holistic approach to talent risk, one of the biggest challenges for emerging markets is an insufficient pipeline of future leaders. Nayar agrees a lack of role models is a big problem, despite huge populations.

“We have a role model and leadership problem but a demographic advantage,” he says. “India can be a nation of 1.2 billion consumers or a nation of 1.2 billion ‘intrapreneuers’. The choice is based on how you deal with human capital and their development. Here [in India], the role of HR and leaders is significantly larger than anywhere else because it will impact on the future of the nation.”