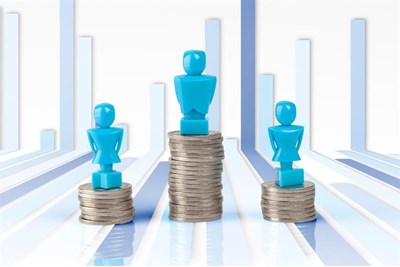 While UK unemployment hits another record low, the TUC warns of wage inequality between sectors

UK unemployment dropped to 3.8% in the first quarter of 2019, marking the lowest rate since 1974, according to the latest labour market statistics published by the Office for National Statistics (ONS).

However, trade union the TUC has warned that wages and productivity remain low and wage inequality is on the rise. Its analysis of the latest ONS data found that wages in most sectors are still worth less than before the financial crisis, and overall real wages are still £17 a week lower than a decade ago.

However, a small number of industries have bucked this trend. Average real pay in the financial sector has increased by 9.3% (£119 per week) since 2009, reaching a record average of £1,405 per week. Other sectors to have witnessed real wage growth include retail and hospitality, which are likely to have been boosted by increases to the minimum wage.

The hardest-hit workers are those working for membership organisations, repair services and in furnishings, where pay was £86 per week lower in real terms than a decade ago. The next worst-performing sector was manufacturing of food and drink, where real pay was still down by £52 per week. People employed in health and social work and education were also found to be £36 a week worse off than in 2009.

“It's not right that pay is racing ahead in the City when most working people are still worse off than a decade ago,” commented TUC general secretary Frances O’Grady.

“The architects of the financial crisis are earning record amounts while teachers and nurses struggle to get by. Workers deserve a much fairer share of the wealth they create. That's why unions need new rights to access workplaces and negotiate industry-wide rates. Pay inequality helped drive the last financial crash. It can't be left unaddressed.”

The ONS data also showed that the amount each worker produces per hour slowed for the third month in a row, while annual wage growth slowed to 3.2% in the three months to March compared to 3.5% a month earlier.

Ben Brettell, senior economist at Hargreaves Lansdown, said: “The ‘British disease’ of low productivity is a spectre that continues to haunt us. There are valid concerns that UK firms are hoarding labour instead of much-needed capital expenditure. Why would you invest large sums in new plants or machinery in such uncertain times when you could hire an extra worker and get broadly the same result?”

He added: “Perhaps it is still too soon to get ahead of ourselves though – a week before new inflation data there’s a question mark over how real the earnings growth is. Rising wages are bound in due course to feed through into wider price rises.”