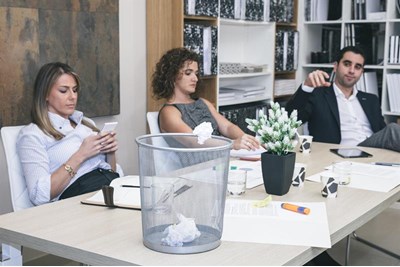 Just 33% of working-age people in the UK feel positive about their future career prospects, according to research from City & Guilds

Based on findings from labour market economist Emsi and a poll of 5,000 working-age (16 and older) people, Missing Millions states only half (53%) of UK employees have received workplace training in the past three years, and a third (34%) have either never received training or did so more than five years ago. This lack of opportunity to develop has led to employees feeling disillusioned about their future.

Sixty per cent of respondents felt the skills they did have were not used at least 50% of the time, suggesting that employers are not fully capitalising on the skills they already have within their businesses.

Kirstie Donnelly, interim CEO at City & Guilds Group, said: “Over the past decade we have witnessed continued cuts to adult education funding, which has meant that certain groups of people have effectively been ‘left behind’.

“As the impact of artificial intelligence (AI) and the fourth industrial revolution (Industry 4.0) continues to totally reshape the labour market, we need to see urgent action from the government to reverse the decline of the lifelong learning sector – ensuring people in all areas have access to critical skills development and employers have access to the talent they so desperately need.”

Access to training also varied by region, with traditionally working-class areas struggling to access jobs and training. Those living in the north east of England faced a significant disadvantage in access to training and opportunities for progression when compared with other regions. Only 21% of people in the North East felt positive about the jobs market in their local area, compared to 45% in London.

Anthony Impey, chair of the Skills Policy Unit at the Federation of Small Businesses, admitted that there were no quick fixes but said there are solutions employers can introduce.

He suggested “looking in new places to find talent, as seemingly-different jobs require many of the same skills, as well as embedding flexible working practices and making training available to people at all ages and stages of their careers.

“Rather than relying on sector-relevant experience, employers need to concentrate on assessing a job candidate’s underlying skills profile and match this to the occupational requirements,” he said.

As a result of the findings in the report, City & Guilds Group is calling for the government, policy makers, employers and individuals to take action.

It suggested employers need to invest in skills development for people at all stages in their career and that individuals need to start looking for more opportunities to upskill themselves outside of the workplace or put themselves forward for training at work.