Trying something new at Wagamama 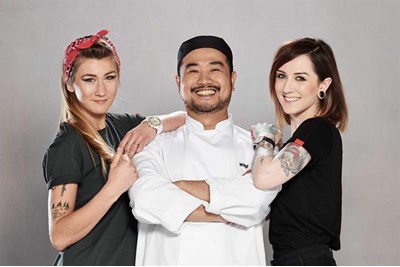 We’ve all got one. – our trusty, failsafe favourite Wagamama dish. For many it’s the katsu curry, others the udon noodles. It’s the one you always resolve not to order but somehow can never resist.

Having a dish so beloved it never fails to tempt you away from branching out into something more adventurous is no bad thing. But it’s something Wagamama people director Andy Moat is keen to help tackle, as part of the Japanese fast food chain’s quest to boost the number of times the average person visits.

“People visit us 3.7 times a year on average; the industry average is four. If you only eat katsu curry you might only want that four times a year. But each time you can push that up is worth a lot of money,” explains Moat. He adds that ensuring staff have the confidence and knowledge to recommend other dishes is an important way of tackling this.

The aim to raise people’s yearly visit average is just one of many ambitious targets. Boasting a more than £200 million sales turnover, 4,500 employees and 120 UK restaurants, the chain also has its sights firmly set on both UK and global expansion. Having launched four sites in Boston and with 35 international franchise restaurants worldwide, the chain will be opening a New York restaurant this summer and, in the words of Moat, intends to “build out from there”.

And yet none of this might have come to pass had the business not undergone a significant transformation over the last three years. Moat reveals the HR initiatives key to ringing the changes…

To describe Moat’s experience as a baptism by fire when he joined from B&Q in September 2012 would be an understatement. He arrived just as CEO Steve Hill was announcing his departure. The company was run for a period of time by its finance and operations directors, then by CEO Steve Easter, who then decided to return to McDonalds.

Moat quickly learnt, he explains, the power of a hands-on approach – personally recruiting many senior members of the team himself, for example. The benefits of such a method are something many larger businesses, or those faced with different sorts of instability, could learn from, he says.

“Maybe at a B&Q-sized business, if you’re actually doing the work you are doing something wrong,” says Moat. But he caveats that “the ability to move up and down the levels” can be very powerful. All senior members of a business should be encouraged to aspire to this to some extent, he feels. “Every member of the exec team, the closer they can get to the business, with all the other things they have to do, the better,” he says.

Moat recommends head office staff spend time working a shift. “You learn a lot; it’s really hard work,” he says. “People like me can say ‘you need to smile’ but it’s really good to remind yourself of the challenge of the work. Secondly it brings such good will. Because you’ve done the shift people listen to what you have to say.”

It was clear to Moat when he arrived that the business’ HR model wasn’t working. The team were mostly ER advisors sitting in Wagamama’s HQ and so detached from the business.

So Moat rolled out a true HR business partnering model, with these HRBPs spending three out of five days in the field. The sort of person recruited to these positions and the kind of training provided is also radically different, reports Moat.

“They’re fully qualified coaches now so the style of their visit has changed a lot,” he says. “They’re not just giving someone a list of stuff to do, but spending time with the team, coaching them about how to fix problems.”

Moat explains that the prospect of the new National Living Wage has provided a welcome opportunity for the business to review career path and pay structures.

So Moat and his team simplified this into senior and junior managers, with a much clearer emphasis that only those interested in becoming restaurant GMs should be junior managers. This is already having an important impact on retention rates. “When we do exit surveys the number one reason people say they leave is because they couldn’t see how they could build a career at Wagamama, which is incredibly frustrating when you sit at the centre and see all the restaurant openings happening,” Moat says. He adds that the hospitality sector’s poor record in explaining career development opportunities to people is why turnover is so high compared with retail.

The other push factor cited when people leave, reports Moat, is “they didn’t think their manager cared about them”. Greatly enhancing management training is key to improving this he explains, with hospitality’s again poor reputation for management-frontline relations another reason retail often swipes top talent.

So the chain has turned more of its high-performing sites into ‘centres of brilliance’ hosting training. (Previously the only centre was Camden, which was often too full or too far away for managers to train at.) “We now have 18 of those centres. We have a 95% retention rate of managers training there versus the 66% it was,” reports Moat.

The new L&D team has radically revamped training methods, he adds. “When we change the menu we’ll do a menu change roll-out, everyone tries [the new dishes]. That’s more structured now. So the L&D team work with the chefs to create the training.”

He explains that this and online multimedia training portal Noodleversity all contribute to that quest of encouraging customers to branch out from their favourite dishes.

The chain has also introduced a new “black belt” role, someone who is responsible for training new starters on-site. “One of the biggest problems we have in the sector is getting people through their first 90 days,” explains Moat of the importance of engaging people as soon as they arrive.

With much improved talent development and retention processes, Wagamama needed an effective means of tracking its talent. A simplified talent management system was the answer, reports Moat: “We have a five-box system. Now twice a year we have all the area managers in and they’ll present to me and the operations director the talent for their area.”

Regarding the drawbacks of the more commonly used nine-box system, Moat adds: “I just don’t think there are nine outcomes… You end up in a conversation about ‘how do you define potential and what are your indicators?’ We just simplified the whole thing so we have four criteria: your results delivery, leadership, ambition and desire, and head space, which is problem solving and judgment.”

Language is important here, feels Moat. “The biggest chunk of your company’s going to be there [in the middle rating] and we want them to feel good about that. So it’s not just ‘good’, it’s ‘brilliant’.”

He adds that HR should be wary of enforcing certain terminology, and instead be open to what takes off. “With the management structure, we originally called the deputies ‘assistant front of house managers’ but no-one said that, they called them ‘juniors’. So we just changed it,” he says, adding: “If something works you’ll hear it. You light little bushfires; the ones that take off [do so] because it’s a good idea”.