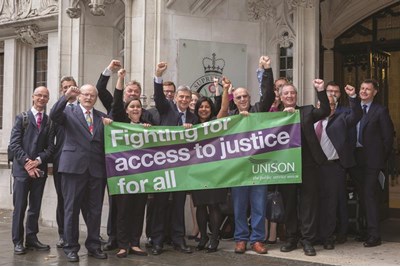 Tribunal fees were unexpectedly scrapped in July. What can we expect going forward?

On 26 July 2017 the Supreme Court ruled in favour of public service union UNISON that employment tribunal fees are unlawful. The union battled for three-and-a-half years to scrap the charges, losing in both the High Court and Court of Appeal. However, the Supreme Court’s panel judged the fees to be unlawful because “persons will effectively be prevented from having access to justice”.

Many HR and legal experts believe removing these fees will result in a surge of fresh claims being brought to court. However, cases are unlikely to return to pre-2013 levels because other legal reforms remain, such as the qualifying period for tribunal claims such as unfair dismissal increasing from one year to two in 2012.

But there is still uncertainty on the likely volume going forwards. It is also not yet clear if the government will introduce further legal reform to absorb the impact of any rise in claims.

University of Sheffield head of HR services Robert Gower says that abolishing fees could create a “free for all” from small claims and ‘no-win no fee’ lawyers. He hopes the government will issue guidance, particularly on older tribunal cases, so any influx in cases is controlled.

“Large organisations like ours are seen as quite rich and there’s a risk people might take us to tribunal because of the lowered fees,” he says. “I’m particularly worried about cases people didn’t bring between 2013 and 2017 because HR practitioners might be faced with quite old cases where key witnesses may have left the company, and gathering historic information may take longer, making the legal process more time-consuming.”

Another key question is how the government will refund the fees thousands of people have been charged since July 2013, estimated at £32 million. Burges Salmon employment law partner Adrian Martin adds that it’s also unclear whether fees some employers have paid in court or reimbursed to employees in compensation will be refunded.

Martin feels the government will most likely respect the judgement because the decision came from the Supreme Court, which is the highest UK court. However, he says the Conservatives might attempt to vote through changes to make the tribunal fee system more balanced between the interests of employers and employees.

“It’s win-win for the employees without the fees,” he says. “As a result, weaker court cases may come through and it’s then up to employers whether they spend time and money defending them.

“[To balance the system] fees would need to be at a level proportionate to the claimants’ ability to pay, but not so high that it serves as a barrier to justice again,” he adds. “This may be an area the government looks at. However, with parliament in the state it’s in in terms of both sides of the house, they think it’s something they couldn’t get through.”

Brabners’ head of employment and pensions (Liverpool) Nick Campbell believes claims could “increase considerably”, adding that employers should continue to carefully consider employee relations going forward. He sees the case as important for the trade union movement, which has seen a declining membership over the decades from 13 million members in the 1980s to seven million in 2017.

“This case is a significant victory for UNISON and there is no denying that tribunal fees would still be in force had it not been for its efforts,” he says. “We can safely assume the union movement will use these recent victories as a springboard to raise its profile and refuel its recruitment drive. However, it remains to be seen whether renewed confidence can reverse this decline in membership.”

But others point out that the employment tribunal fees scale is just one part of a bigger system and not solely responsible for the rise and fall in case numbers.

Tim Forer, a partner at Blake Morgan, highlights that there was an increase in the qualifying service for unfair dismissal claims around the same time as tribunal fees were introduced. He adds that the government may establish a deadline for claimants who originally held back their cases between 2013 and 2017 because of the fees.

This is a policy the University of Sheffield’s Gower supports because it adds more certainty to the volume of additional tribunal cases and the timeframe in which they may be brought to court.

The legal support provided by the Advisory, Conciliation and Arbitration Service (Acas), established in conjunction with the employment tribunal fee changes in 2013, has been identified as a potential way to continue dealing with some cases before they reach the court stage. Lawyers believe Acas should now be given additional resources to handle the increased volume of cases.

DLA Piper partner Gurpreet Duhra says that employment tribunal resources – reduced following the drop in claimants in 2013 – may need to be reinstated to cope with demand.

“If we do see a significant increase in tribunal claims then unless extra resources are made available to employment tribunals, this is likely to result in slower administration of tribunal claims and longer wait times before claims are determined,” he says. Martin adds that Acas may only stem the flow of additional cases going to tribunal as it can’t force individuals not to take their case to court.

The bottom line for Shakil Butt, former HRD at Islamic Relief Worldwide, is that a potential rise in claims presents an opportunity for companies to enhance their people management processes. He says that line managers sometimes delay difficult conversations with new staff unnecessarily. He adds that if HR clarified these processes early on it could reduce the likelihood of problems developing and potentially resulting in legal action.

“With the removal of these fees there may well be an increase in the number of claimants, but I also believe it creates an opportunity for people management to become a focus,” he says. “HR can improve the recruitment and probation processes making sure these are fair and balanced.”

As employers brace themselves for an increase in employment tribunal claims, the government has several options to create a more balanced system that is fair to both employers and employees. However, whether the government will feel confident enough to force through further tribunal system changes before it becomes preoccupied with Brexit remains to be seen.