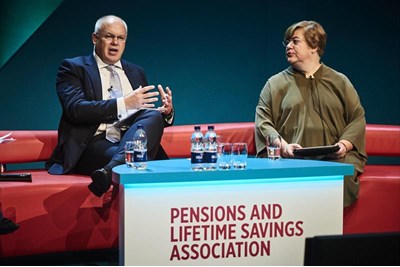 The Pensions Regulator (TPR) and the Financial Conduct Authority (FCA) have unveiled their joint pensions regulatory strategy, which aims to deliver better outcomes for pension savers and those entering retirement.

Launched by David Geale, director of policy at the FCA, and Lesley Titcomb, chief executive of TPR, on day two of the PLSA Annual Conference and Exhibition 2018, the strategy sets out the regulators’ joint vision for tackling the risks and challenges facing the industry over the next five to 10 years.

“The pensions landscape has changed substantially,” said Titcomb, pointing to a number of factors including auto-enrolment, major policy initiatives, economic and political factors, and technology changing people’s expectations, which are all affecting how and what people save.

“People want more transparency and access to financial information at their fingertips, they want to trust the people looking after their money,” she said.

Because of these changes the regulatory landscape needs to adapt to make sure it is fit for purpose to protect pension scheme members, whether they are in DB or DC schemes, and whether they are younger or older savers, added Titcomb.

Announcing the strategy, Geale said: “We’ve seen a huge amount of change in the past few years and therefore we felt it was important to take a step back and consider the key harms in the market and where the focus should be.”

He identified four key areas of focus for the strategy, which aim to ensure people have adequate income in later life: access and participation (to provide pensions and retirement income products that will support people and help increase financial provision for later life; funding (pensions that are well-funded); governance and administration (pensions are well-governed and deliver value for money); and consumer understanding (to provide the tools to enable people to make informed decisions).

The strategy also sets out two key priorities for action for the regulators. The first is a strategic review of the entire consumer pensions journey, which Geale said would look at “how we can best help people make good decisions and identify gaps where things can be done better”. The second is to use their powers to drive value for money for pension scheme members, including looking into setting clear standards and developing a framework to assess the value of schemes.

It is hoped the strategy will help optimise outcomes for members, the regulators announced, in order to prevent people reaching retirement with an income that either isn’t sufficient or isn’t what they expected.

“Members have expectations that they will have enough later in life,” said Titcomb, conceding that the regulations have largely focused on DB pensions rather than DC pensions in the past.

“We’re aiming at driving up confidence in pensions and savings. But we have to get under the skin of what’s happening as we do see people withdrawing their pots,” she added.

However, there is a lack of trust in pensions and the financial sector overall that needs addressing, said Geale. “It’s rare to see a headline without the word scandal in front of it,” he said, adding that “trust in the industry needs to be earned”.

That said, the aim is to change behaviour through supervision and “not enforcement”, Titcomb explained.

Speaking to HR magazine after the launch, Titcomb said HR has a crucial role to play in this changing regulatory landscape. “I think pensions in the UK are a really important part of any employers’ proposition to their staff – the famous EVPs – but they are also complex.

"So what I look for are HR departments that are prepared to engage and help employees become financially literate, to better explain the role that the pension plays. I think both the employer and the employees then benefit from that.”