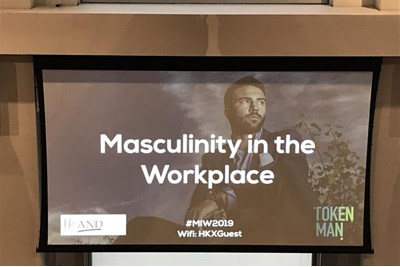 The Masculinity in the Workplace conference, organised by culture change business Utopia and The Hobbs Consultancy, in collaboration with HeANDShe and Token Man, and held on International Men’s Day (19 November), aimed to challenge the limiting and narrow constructs of masculinity that currently exist in the workplace.

Here's some of the lessons we learnt:

Male privilege can be used in a positive way

Will Pike, Mumbai bombing survivor and disability activist, told how he had struggled to adapt to life as a paraplegic.

Speaking at the event, organised by culture change business Utopia and The Hobbs Consultancy, in collaboration with HeANDShe and Token Man, he said: “Every day you measure your progress by how much you cry or don’t cry.”

Pike survived the Mumbai terrorist attack in 2008 but was left paralysed and unable to walk when he fell from a hotel window trying to escape. Like other victims of overseas terrorist attacks, he then found himself entitled to no compensation due to a “legal loophole”.

Pike showed that his male privilege could be put to good use.

“My white male, middle-class privilege kicked in and I became the poster boy for this,” he said. “I got the law changed so all future victims now get compensation.”

Pike went on to explain how his lived experience as a person with a disability has largely been positive.

“Being in a minority has given me someone to speak for – it’s no good speaking on behalf of white privilege but now I can do something,” he said.

“There’s a general perception that disability is bad and it is – but some good comes from it.”

“Vulnerability opens doors,” he added. “It’s an opportunity for connections… [but] for a lot of men that vulnerability doesn’t fit with their alpha mentality.”

Masculinity can be vulnerable

Speaking on a panel, he said that when he heard people speak about female vulnerability, it really resonated with him. “I thought: 'they're not just female traits',” he said.

Bartlett told how because he is a white male in a white male work environment, he felt “pressure to be all these things”.

“Because I’m white, male, middle class, straight, cisgender, I don’t tick any boxes which meant I felt I didn’t have a right to be anything but completely sorted,” he said.

“I’d always prided myself on handling stress well,” he explained, until about two years ago he wasn’t sleeping and was thinking about work all the time.

“I realised that what I thought was my superpower to deal with stress and anxiety and hiding it from everyone else was actually my kryptonite,” he said.

“Alpha doesn’t mean not showing vulnerability,” agreed Tanya Joseph, former director of business partnerships at Sport England. “Being vulnerable is not the same as weakness but we teach boys to not be this.”

Joseph shared her experience working as press secretary to ex-prime minister Tony Blair, where she reported directly into Alastair Campbell.

“[Campbell] had and still has a reputation for being blokey,” she said, admitting she had some “trepidation” joining the team at first.

By contrast, she pointed out that in other workplaces she has experienced male leaders who “talk about workplace culture” but create environments where she felt she couldn't be herself.

Government policy has not kept pace with society when it comes to challenging outdated attitudes towards masculinity in the workplace, according to David Lammy, Labour MP for Tottenham, in a video interview at the event.

Lammy described political views as “old-fashioned”, explaining that the Conservatives still subscribe to the family life of the 50s where men go to work and women stay at home. “And the left [focuses on] more women’s and children’s rights… but then men get left out of discussions,” he said.

“Society is ahead but the language of Westminster has not kept up.”

“Shared parental leave is not nearly good enough or properly resourced but at least it’s arrived,” he said.

“[We need] proper paid parental leave – and not just for newborn babies but when kids are transitioning from primary to secondary school,” he said, explaining that this is another particularly challenging time for parents.

Lammy added: “Westminster is waking up to the problems of masculinity.”