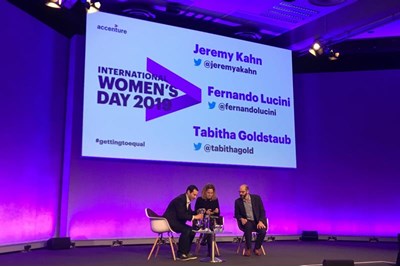 Looks like a lively discussion - sorry to have missed it. For me, it is also about asking each person to do what they (we) can to invite difference into our lives, to make the 'aspirational' more ...

Speakers explored the ways organisations can proactively 'get to equal'

“It can be very easy inside the corporate bubble to think we’re getting there [with equality]”, said Rebecca Tully, managing director for inclusion and diversity at Accenture UK and Ireland, introducing Accenture UK’s International Women’s Day 2019 event.

She urged ongoing vigilance however: “2018 was the height of MeToo… 100 years since the vote… marches in the streets protesting… the voices of 2019 have taken a gentler tone or perhaps we can’t hear them over the voices of politicians.”

Tully said that “outside this room we still need to march as we won’t get to 50/50 in the workplace unless we’re proactive about it”.

Speakers explored a number of ways employers can be proactive about driving equality and inclusion:

Think about who isn’t in the room

Sinéad Burke, teacher, writer, broadcaster and advocate for disability and design, shared her personal experience of having Achondroplasia (the most common form of dwarfism) and becoming a teacher.

“People would ask when I was training to be a teacher how I’d do it,” she said, highlighting questions around her being able to see students across the classroom and being able to put art on the wall. She said she changed the layout of the room and got the children involved in art displays – changes no one had thought to make before to make the space accessible to "a little person".

Burke told of her move into fashion, an industry that had “never viewed [her] as a customer or employee”. After seeing an article in a newspaper about fashion and disability that hadn’t involved interviewing any people with disabilities, she emailed the journalist who replied saying they couldn't "believe [they] didn’t think about this”.

Burke encouraged businesses to challenge themselves by thinking who they haven’t included in conversations. “Ask yourselves: who is not in this room and, when you make decisions at work or home, who is not considered?” she said.

Burke went on to share a time when she learnt the power of allies. This was when the same journalist demanded Burke be given a front row seat at fashion week so she could see the show. “That moment taught me the definition of being an ally – she didn’t benefit from giving me a seat but she stood outside herself a second and saw the power of what she may be able to do,” said Burke.

Barbara Harvey, managing director at Accenture Research and lead of Accenture's UK mental health programme, also spoke on the importance of allies. She explored their importance in tackling mental health issues in the workplace.

She pointed to Accenture research which found mental health issues touch nine in 10 people in the workplace today, and research which found that of the four in 10 people who have talked to someone at work about a mental health issue, all received a positive reaction. She said: “So this shows just how important allies are as it shows how important it is that the first conversation someone has is responded to in the right way.”

Harvey proposed the use of ‘friendship benches’, a concept that started in Zimbabwe where there are high rates of depression and sparse mental health resources. “They trained grandmothers to sit on benches and have a chat and it works really well,” she explained. She then introduced two Accenture mental health allies who modelled a friendship bench conversation for the event's audience.

“The first training I did was to be a mental health ally and it’s still the best training I’ve ever done,” said Stuart Catlin, who became an ally after being a carer to his ex-partner for seven years. “I was never brave enough to talk about my experience and was afraid of judgement, but the ally programme changed that and I learnt how to share my story.”

“Allies are there to normalise [mental health],” said Aaron Sherwood. “Not everyone is comfortable about mental health but by being role models we can make changes.”

A panel spoke about the impact AI will have on inclusion and diversity.

“AI is changing the way products are built, therefore we need to start thinking diversity is not just a nice to have but it’s about life and death,” said Tabitha Goldtsaub, cofounder of CognitionX.

“There are many cases whereby AI could be rendering women invisible from certain products” she said, meaning that women should “not just be in the room but [be involved] in the building [of products and innovations]”.

Fernando Lucini, AI lead for Accenture UK, agreed that greater diversity is needed in business to create products and services that appeal to diverse audiences. He gave the example of car crash test dummies always being male because they're created by males. “When you get [the dummies] you don’t think 'this is not diverse', you just think 'this is the thing you use to test it',” he explained. “It’s not the natural thing to... question these things. So we’re now starting to see agendas from firms saying ‘by the way’… where they should be asking the right question.”

“It’s trying to get people in the business to realise that targeting is one thing but bias is another.”

Goldtsaub said there are three things organisations need to think about when using AI. These are to make sure: the data sets are representative, people can test it properly, and that there is an environment where if people see something non-inclusive they can put their hands up and say something.

Looks like a lively discussion - sorry to have missed it. For me, it is also about asking each person to do what they (we) can to invite difference into our lives, to make the 'aspirational' more 'normal'.